I’ve been reading a bunch of 1980s Hulk comics thanks to my time with Zach Davis out in Portland, Oregon—which I am still gonna blog! What’s more, I’ve started re-watching the Hulk TV series from the late 70s and early 80s—I saw this one as a kid, it was a big family event and it’s really interesting to re-watch. I find myself increasingly relating to the schizophrenia that is the Hulk, not to mention he is a my favorite tweeter in all his various guises. So, when I went browsing for Comic Book Covers to animate, I immediately wanted to pull something from 1980s Hulk. I happened upon this amazing comic from January 1986 titled “Freedom!” 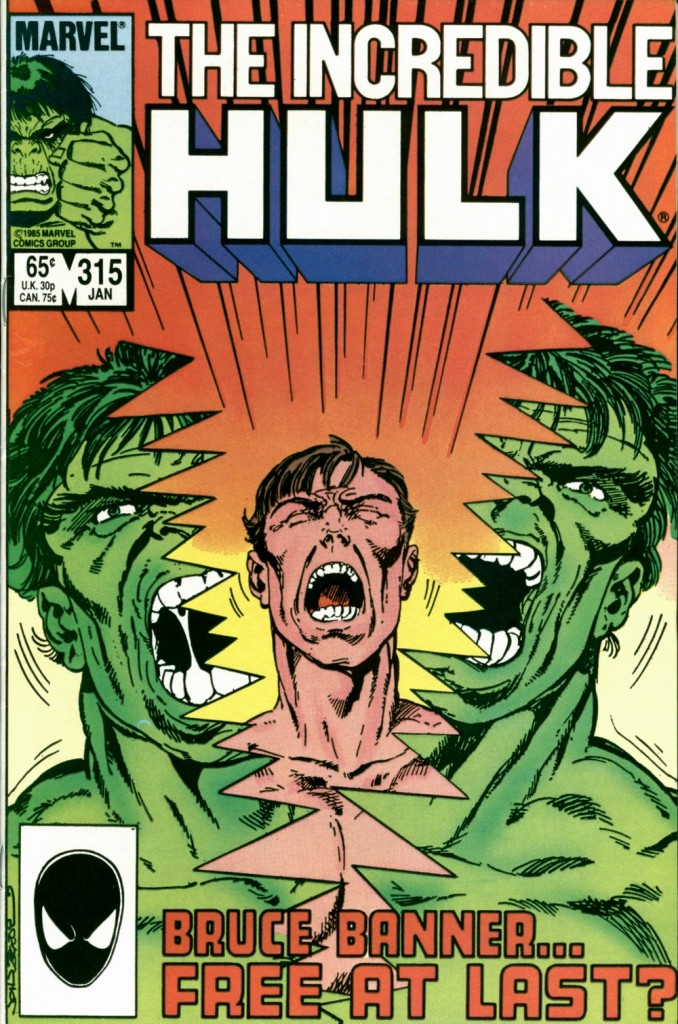 In this issue Bruce Banner and the Hulk are finally separated into two different beings. As a result, Banner falls in a severe comma and is hospitalized right away. Meanwhile the Hulk, also unconscious, is taken away because SHIELD wants to get rid of him. But as usual Hulk goes mad and kills a bunch of the SHEILD henchmen and the doctor who sets him free feels bad and promises to kill him. I love this particular comic to because it’s a great profile of Hulk’s career as a superhero: no one trusts him, he’s a complete loose cannon, he kills indiscriminately, and you still can’t help but root for him. So, in honor of the Hulk—who reminds me a lot of Tom Woodward for some reason, another hero of mine—I decided I would animate the cover of “Freedom!” to complete what is for me the coolest ds106 design assignment ever: animated comic book covers.

I can’t take credit for the above animated GIF, so much of the work was done thanks to the patience and knowledge of Tim Owens and Alan Levine who walked me through their process for doing more complex animated GIFs like this. This one had a ton of steps, and I am going to write some notes below so I can have an outline of the process with the idea that I’ll come back after my trip to Austin, TX and do a more thorough tutorial for the sake of posterity.

So, here is the process, we had to isolate the two halves of the splitting Hulk and put them in their own layer. We didn’t select the red text or the Spider-Man Marvel icon when splitting the halves because they both were made their own layers, that were then locked together and place in the uppermost layer hierarchy so that they always appear despite the animation below them. After that we had to fill in the background with a new spectrum of colors that radiated out from a central point, mimicing the range of colors on the cover—this to fill in the holes left by the two halves of Hulk splitting. This was a new feature of Photoshop that Tim Owens taught me, as was the clone tool that is nothing short of amazing. I used the Clone tool to fill in the details of Hulk’s body as he rotates on the cover as well as to fill in Bruce Banner’s body in the middle. After I had cut out the two Hulk halves I filled in a lot of the Hulk’s green color in each of those halves.

After that, Tim and Alan explained how to select each of the halves and transform it by rotating the image off a particular axis point X degrees. I did this 7 times for each half at about 2.5 degrees rotation at the same angle. This was a bit painstaking, but it worked brilliantly. What’s more, Alan showed me how to control the animation process with precision in Photoshop that pretty much blew my mind. I will be blogging a comprehensive tutorial of how I did this animated GIF, so these scrawlings are really just notes I will use later to make the process I went through more precise and understandable.

I really appreciate the time Tim and Alan took to show me these details because I learned more about Photoshop in the three or four hours making this animated GIF than I have the whole time of teaching design in ds106. I guess when you really want to do something bad enough the learning not only happens, but is that much more enjoyable. Also, I now understand why GIMP is no Photoshop.