Part of moving ds106 to a new server is making sure you don’t leave a trail of dead links in your wake. With great classes come great responsibility 🙂 I think I have the caching issues and some of the kinks worked out after the move, but one think I did want to make sure wasn’t lost in the move was the ds106 wiki, also known as ds106 docs. It was used through 2014, and while it wasn’t a huge part of the class design, for quite a while we used it to for  tech tutorials, syllabi, and other assorted resources. For example, I forgot about the detailed tutorial I created for an animated series of Dead Zone trading cards: 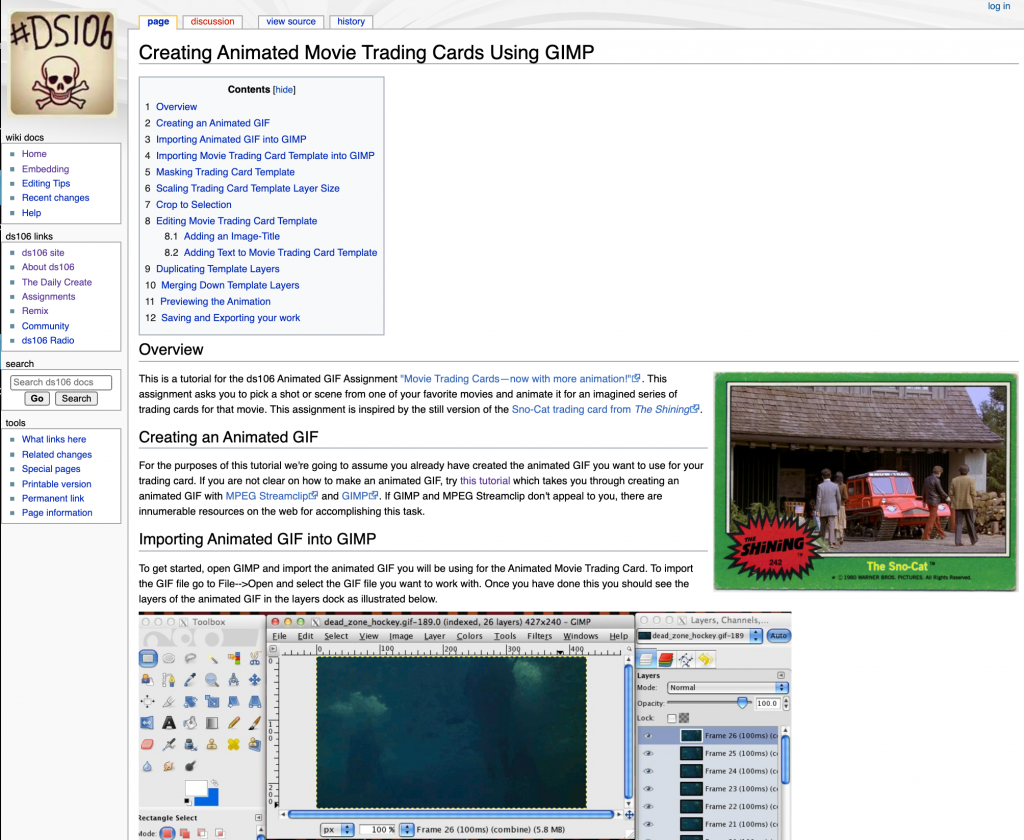 Or the equally detailed Creating Animated GIFs with MPEG Streamclip and GIMP tutorial. 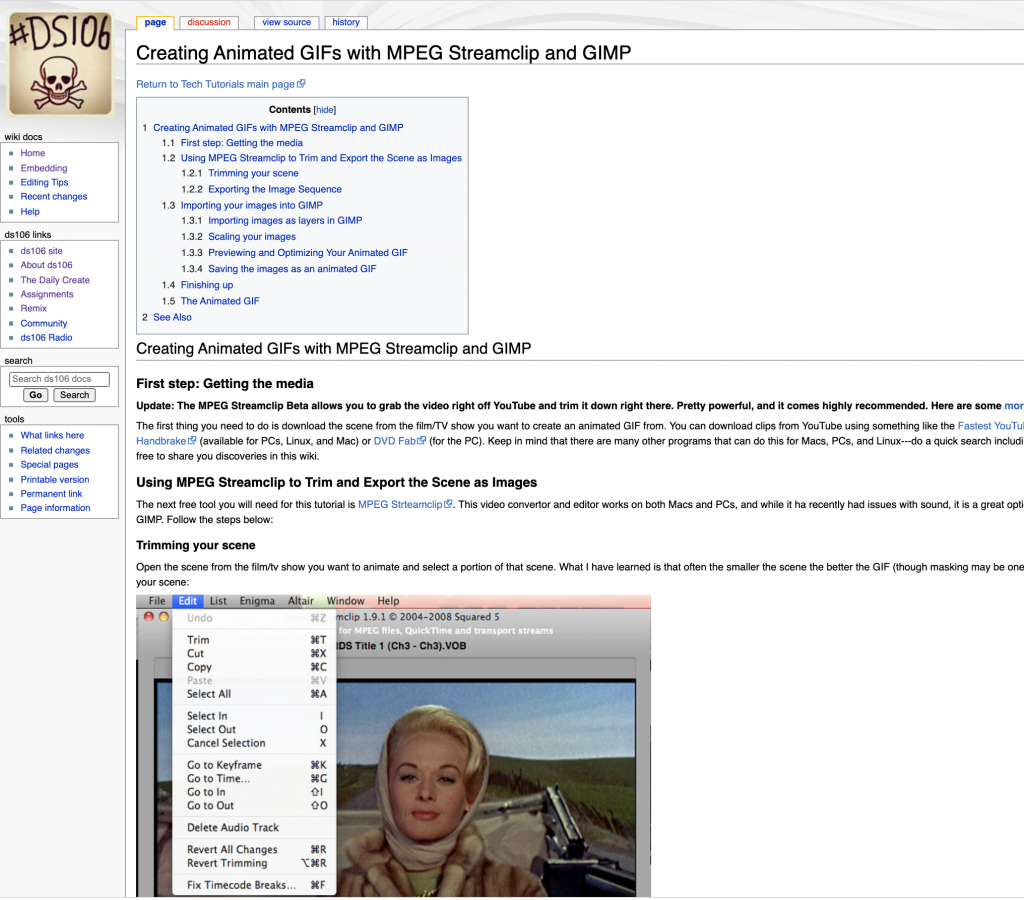 I understand these resources are not all that useful anymore, but the internet preservationist in me wants them to live on. There are other resources such as various syllabi for classes over the years, such for Alan Levine‘s and Martha Burtis‘s Camp Magic MacGuffin syllabus from Summer 2012, or the syllabus for the ds106 Zone in the Summer of 2013. What I noticed going through my early syllabi for ds106 is they were all the same, they just started riffing on a different theme as the years went by, but the core remained. And while that seems logical, I really didn’t remember simply copying and pasting the basics and then building the theme and the prompts of the class on the blog and through the assignments. So, all this to say keeping the wiki was part of the deal of moving the site off shared hosting.

One thing you realize when moving sites is the value of using subdomains versus subdirectories, let me explain. The MediaWiki instance was installed at ds106.us/wiki rather than wiki.ds106.us. That might have had more to do with the WordPress Multisite being subdomains and my not knowing how to resolve redirects, but if the wiki was installed in a subdomain it would still be live right now (which is probably a bad idea regardless). But given I moved everything in ds106.us and the wildcard subdomains to the Reclaim Cloud, I would not be able to run MediaWiki within a subdirectory of ds106. Whereas subdomain can always be pointed elsewhere, subdirectories lock you into the server you are pointing the root domain to.

So, realizing this I need to a) get the wiki up and running temporarily so that I could then use Site Sucker to get a full HTML-based file backup of the site. This is great for archiving and also ensures that the wiki will not go down as application versions change, modules break, or spammers find a way in.* As you can se from the Site Sucker screenshot above, there are files both in ds106.us/docs and ds106.us/wiki because we used the article path function in MediaWiki to have all articles resolves as ds106.us/docs as opposed to ds106.us/wiki, which explains why the root ds106.us folder has both /docs and /wiki and both have part of the HTML archived files.

Another thing I did before archiving the MediaWiki instance (which I also have a full backup of) was update it from 1.19.xx to 1.33.xx. I had to replace the MonoBook theme, turn off the locked-out module, and adjust some other errors as a result of the update, but I was happy and relieved that it worked after a couple of hours and MediaWiki was now running a supported version on PHP 7.3 no less. Part of me still loves the promise and possibility of MediaWiki, but after wrangling with the documentation and the code it was a good reminder why it was never sustainable-the interface and editing was never made any easier and versioning issues made long-term maintenance onerous.

And with that, I think the future-proofing of the ds106 infrastructure and trying to ensure there remains some link integrity is in pretty good shape. I’ll do another pass this weekend, and then terminate the shared hosting instance, and commit to the cloud!

*While I was at it I took a flat-file back-up of all of ds106.us and got a database and file dump (as well as a full cPanel backup file) that currently live in DropBox. So, this is a note-to-self that I do have a full snapshot of the site from June 2020 when I go searching for it in the future.

Update: I forgot to mention when posting this that I also created an index.html and about.html redirects given Site Sucker has the MediaWiki template linking to ds06.us/index.html and ds06.us/about which results in a 404 error. I created a simple HTML redirect file for the about.html file to go to just /about, and I tried the same for the index.html but that caused to many re-directs. I figured that this was because the default.conf file for nginx had index.html before index.php in this block:

A simple transposition of index.html and index.php fixed it:

Or at least making sure index.php comes before index.html in that line seems to have fixed the redirects.