Another awesome Daily Create today (thanks Mariana!), this one was imagined by Tom Woodward and has you picking a patent image and cleaning it up to make it look cool. I couldn’t find a patent image I was in love with, so I found a schematic of the Atari 2600 joystick here, and I started playing with that. I added gridlines, made the whole canvas gray, and then played with the brightness and contrast (upping contrast and reducing brightness). It’s nothing special, but I invoked the 10 minute rule for Daily Creates and moved on. The result is below: 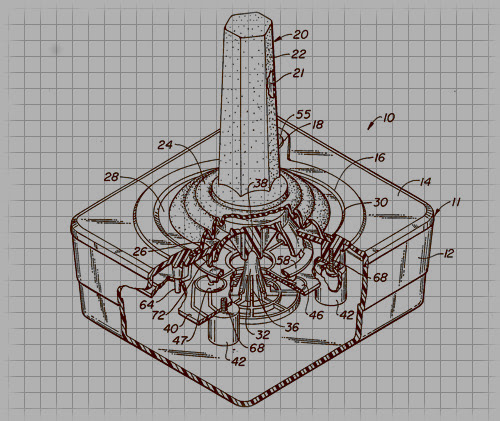 The Daily Creates (TDC) have been very fun this semester in ds106. In fact, some of the most creative work students have done thus far has been TDCs. This got me thinking how sick it would be to have the Daily Create as a regular prompt on the media wall in UMW’s new and awesome IT Convergence Center? [The media wall is a two story screen made up of 40 HD monitors that spans the main two floors.] The idea being we have that day’s Daily Create featured on the media wall, and also show examples of what people did as they come in throughout the day. We could also encourage folks to submit new assignments and more. Effectively, we’d be inviting the entire campus into ds106 🙂

This entry was posted in digital storytelling and tagged dailycreate, ds106, tdc990, wire106. Bookmark the permalink.