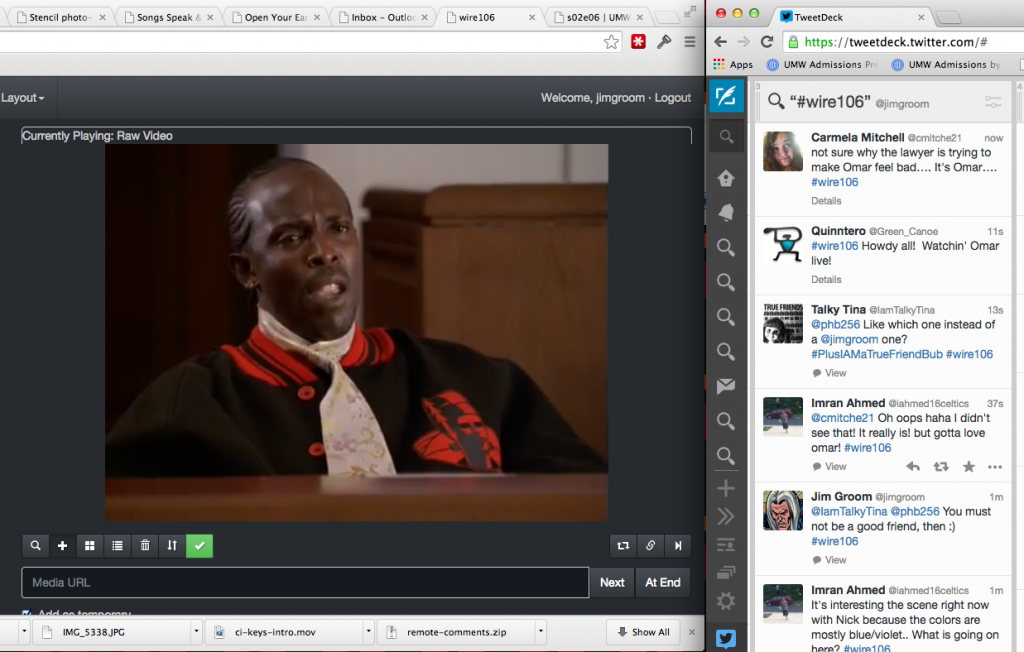 Last week was focused on introducing audio so we did three Wire 106 Listen Alongs via ds106radio that focused specifically on audio. This week we’re introducing visual/photography, so we wanted to switch it up and have folks watch and not listen. Do do this, Tim Owens pointed me to 6IRCNet Synchtube, which allows you to take a video uploaded somewhere online and watch it together with others. I had uploaded an episode of 6 of Season 2 without audio to another site, and I simply grabbed the raw URL of the mp4 and ran it through Synchtu.be which allowed eleven of us to watched it together in the wire106 channel for an hour with Twitter as our commentary tool—all of which is aggregated around the hashtag #wire106.

Last’s week ds106radio experiment, and this week’s Twitter Watch Along is a fun way to reinforce the course as community and remind everyone that online does not mean alienated and alone. What’s more, there are free tools out there that make the experience that much simpler and compelling.

As for watching the episode without sound, I think Carmella Mitchell and Kris Hooks got it right: it’s hard to focus on an episode of TV without the sound. You become so easily distracted. While listening to the sound last week, on the other hand, was the exact opposite experience. You are totally sucked in with audio. It reminds me of the idea Jen Ralston brought up in her interview about sound in The Wire: “sound doesn’t blink.” That was never truer when trying to watch an episode without it, you can peel away from the action without the soundtrack to keep you anchored.