Bad Day on the Midway

After exploring Will Crowther’s early Interactive Fiction game from 1976, I somehow found myself thinking about The Residents’s interactive CD-Rom from 1995 Bad Day on the Midway. This was a crazy game, and it is one of the multi-media experiments from that era that has stuck with me. It’s somewhere between a game, art, and insanity. The interactive animation by the late Jim Ludtke is inspired. In fact, the game was optioned by Ron Howard for a proposed  series that would have been directed by David Lynch. It fell apart, but that’s one of those pop culture alternative history scenarios one could get lost in. The aesthetic of this game reminds me a lot of Bioshock, and I really wish someone would update this game so it could be palyed as a seaamless world—it is so beautiful. 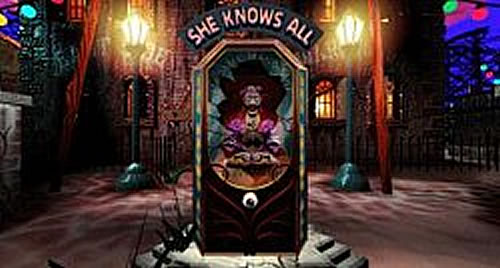 In 2001 The Residents’ released a ten-minute video of the game as part of their Icky Flix DVD. The following video, which i think is from that DVD (am I wrong here?), gives you a sense of how compellingly expressionistic the world they created was, as well as how amazing an update could be 🙂

The Hardcore Gaming 101 review does a great job describing the scenario and talking  a bit about the game play:

You begin the game as Timmy, a young boy visiting a crumbling amusement park known as Midway. But Timmy doesn’t see a pathetic locale where everything is falling apart, but rather a world of wonder, with his thoughts appearing in written form at the bottom of the screen. He loves talking to the mechanical fortune teller, killing communists at the shooting gallery, and riding on the Marvels of Mayhem merry-go-round.
……
You are welcome to play out the game as Timmy, but where the story gets really interesting is when you begin jumping from person to person and seeing the game through their eyes. When you encounter another character, an eyeball cursor appears and allows you to switch your viewpoint. There are other video games where you possess characters, like Messiah and Geist, but in this game you aren’t simply riding the characters’ bodies; you actually become them, seeing a different set of thoughts and having very different experiences.

Jumping from character to character and playing the game as someone besides Timmy seemed pretty wild at the time. It underscored there was no particular goal to reach or treasure to acquire, but rather it was far more concerned with the experience of being there.  It focused on interaction and observation of the world around you, inhabiting other subjectivities, which was later accompanied by a certain amount of discomfort given you could “become” a serial killer or a nazi sympathizer. It was  an experience that pushed the interactive, immersive games of the mid-1990s into some trippy territory, kinda like the dark, b-side of Myst. In fact, like the Myst Reader books back in the mid to late 1990s, Bad Day at the Midway was turned into a novel only year or two ago. How bizarre is that? Updating CD-ROMS to novels is all the rage! 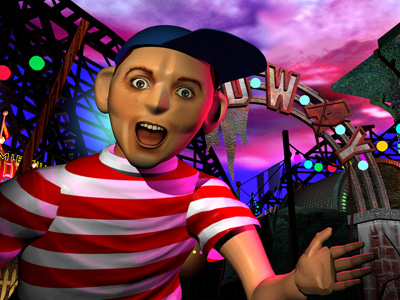 I’ve been using the expression “bad day on the midway” ever since I first played this game to suggest when an activity has gone terribly wrong. I’m not sure if the title is an allusion to something else, but it’s become part of my very linguistic being. Anyway, I’m gonna see if I can get my hands on this game and play around with it again. I miss little Timmy’s adventures on the Midway!

6 Responses to Bad Day on the Midway