bavatuesdays episode 3: The Girl Who Knew Too Much

This was a particularly fun discussion for me, and it came at a time that I desperately needed a distraction. Paul Bond continues to be nothing short of gold when it comes to these discussions about Mario Bava’s films, and it’s pretty amazing how we’ve been able to work together in a pretty loose, distributed way to make this show happen fairly organically. He’s very mellow and doesn’t seem the least bit phased by my lack of organization and planning, what’s more he does his research and has a ton of interesting things to frame about each film as well as Bava’s career more generally. You can see Paul’s post about The Girl Who Knew Too Much (1963) here, and his screen shots for the discussion here.

The discussion starts out talking with a focus on the trailer for the American International release of this film in the U.S. titled The Evil Eye, which appears to be dramatically different from the Italian version—which was a complete flop in the theaters, being pulled after only a week. Neither of us have seen the film, but would love to know if there are any existing versions of the U.S. version out there, because we really want to see it.

It’s fun to talk about the trailer because it includes so many scenes that just aren’t in the Italian version of the film. That said, I must recognize that I misspoke about the proximity of Rome to the sea. Rather than being two or three hours away from the Mediterranean (as I stated during the show), it just so happens the center of Rome is just 30 miles away from Ostia (which Paul mentioned), a beach community that is frequented by Romans during the Summer. In other words, my knowledge of Italian geography is greatly exaggerated, and I suck. Research, Jim, RESEARCH!!! 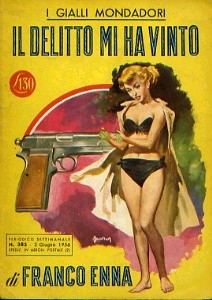 From there we spend some time talking about Leticia Romàn‘s career, the unbelievable use of lighting in this film to create suspense and horror, a few prolonged scenes demonstrating Bava’s mastery of the medium, as well as the fact that many consider The Girl Who Knew Too Much the first film Giallo. We cover even more than this (the conversation lasts over an hour), and I feel the more Paul and I watch Bava’s film in succession the more attentive and comfortable we become with our discussions. There is something be said about working your way through a director’s ouevre to get a more precise sense of their art.

Finally, we also talked about the theme song for this film in the Italian version: Adriano Celantano’s song “Furore.” Celantano is a titan of Italian pop music and film culture, and “Furore” was an earlier hit from 1960. He was inspired by Elvis Presley, and has gone on to have a 50 year career selling millions and millions of records. What we have in this film is an early appearances of Italy’s “King of Pop.” Also, another correction is due here. I’m not sure if “Furore” was Celantano’s first major hit in Italy, that is something I said in the discussion but I can’t confirm it. But, to be frank, I don’t think it was given how many singles he had made before that song—but I recognize that is not proof. What’s more, I am not sure if Furore was Celantano’s first appearance on a movie soundtrack–another point I make that needs to be fact checked. Anyway, I guess it was good no one watches less they be dreadfully misinformed by me, Paul on the other hand is the genuine article 🙂

This entry was posted in bavatuesdays and tagged Adriano Celantano, bavatuesdays, mario bava, The Girl Who Knew Too Much. Bookmark the permalink.

1 Response to bavatuesdays episode 3: The Girl Who Knew Too Much