As Paul Bond already noted, there was a reprisal of the Bavafest last week. We got to talk about the maestro of b-movies, Mario Bava, with Antonio Vantaggiato’s class on Cine y Cultura Italiana at Sagrado. Short version of this post: it was a lot of fun.

We talked about one of our favorites, The Girl Who Knew Too Much or so it is called in Italy. But in the end we did not watch that movie, rather we watched the U.S. cut which was titled Evil Eye. It was released in theaters as part of a double-feature bill with Black Sabbath in American theaters in 1964, both trying to cash in on the international success of Bava’s Black Sunday (1960) a few years earlier. 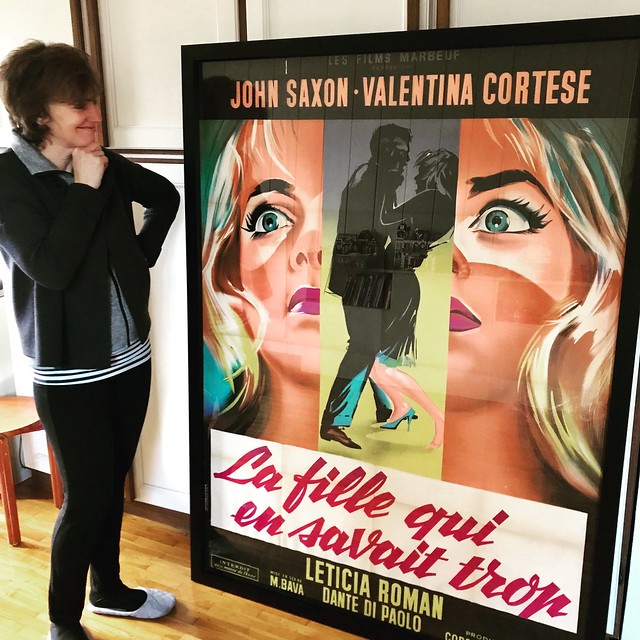 A French movie poster for the film currently hanging in my office!

But let me back up a bit, a few weeks ago Antonio reached out to me about introducing one of the films on his syllabus, namely Bava’s seminal giallo film The Girl Who Knew Too Much (1963). I don’t need too much convincing to talk about almost anything, and the idea of molding young minds to impress on them the importance of Mario Bava was almost too inviting: I even wondered if there was catch? Well, it’s Antonio so of course there wasn’t, just good people doing good things. Once we set a date I looped-in fellow Bava fan Paul Bond. We did a Bavafest back in 2013, and it is always a blast to talk with him about  movies. In fact, writing this post made me go back and find the discussion Paul and I had back in 2013, and I resurrected the video from a back-up drive* and re-posted a version of that discussion on the original post. I am including it below as well:

What was interesting about the 2013 discussion is Paul knew about the alternative US version, namely Evil Eye, but neither of us had seen it yet. In fact, I believe it was not until a year after this conversation in 2014 that Arrow Video would release a version of the film that had both the audio commentary from Tim Lucas (originally on the Anchor Bay DVD from 2007) along with a fully restored version of the U.S. cut. So, in this conversation we tended to focus on the US cut, in particular framing the film around a particularly provocative and thoughtful essay that came with the 2014 Arrow Video Blu-ray by Kier-La Janisse 2010 essay titled “Somatic Incompliance: The Look of Resistance in Mario Bava’s Evil Eye.” The essay argues that U.S. cut provides a far more sympathetic and empowering look of the gendered and generational struggle of the female protagonist (played by Leticia Roman) than the Italian version, which opened up a quite interesting line of discussion through the hour-long introduction of the film. We talk about a number of the points Janisse makes in some detail, and in many ways this discussion is very much of a piece of the bavafest discussions Paul and I had 7 years ago. There was also so fun points to discuss the complex textual history of this film, using the longer opening scene of the US version versus the much shorter Italian version. Here is the Italian opening with Lucas’s commentary:

Now compare that to the US opening  which Quentin Tarantino called one of the best openings in film:

I love stuff like this, and the opportunity to work through not only the alternative openings, but also the alternative endings was such a treat. The ending of the Italian version is a kind of non sequitur to preceding events, effectively suggesting the entire film could have been a hallucination on the part of the protagonist given she had smoked a marijuana cigarette she had received from the man on the place before witnessing the murder that drives the rest of the narrative. It is probably the weakest plot element in an already shaky narrative:

Long story short, she remembers the marijuana cigarette, grabs it from her fiancé’s (played by John Saxon) mouth and throws the laced pack of smokes away only to be picked up by a passing priest. Bizarre, almost absurd. Whereas the US version has the couple riding a skytrain while her fiancé is admonishing her to give up the gialli (or murder mystery novels) that he seems to believe got her into this mess. At that momenta jealous husband shoots his wife who he finds with another man, and when her future husband asks her how she is after the shooting she coyly suggests he has now idea what he is talking about—reinforcing the reading of resistance Janisse articulates in the US version of the film:

And there was much more, the appearance of Bava in a scene on the Spanish steps a la Alfred Hitchcock (a figure he has been likened to for his technical ingenuity again and again):

The horror of whiteness in the apartment scene, which may be the most beautiful scene from any Mario Bava film:

Bava’s brilliant use of shadows and light to create illusions of space and place:

The lighter-side of darkness and the sexual tension running through the film:

It was a pretty far ranging discussion, and I came away from it remembering why I love to teach so much. It’s been a while, but it is always fun.  Here is the hour long discussion in its entirety, keep in mind I was experimenting pretty wildly by pulling the Zoom into ds106.tv and also streaming clips both in Zoom and on the TV, so there are a few missteps. I’ll talk more about my setup for this in another post, but lest the post get too long and I never fin ish writing it, let this suffice for now:

Thanks again Antonio for your generous invitation, thank you Paul for joining me, and thanks most of all to the students for tolerating it.

*The UMW Media server it was originally posted on is now long gone.

This entry was posted in bavatuesdays, ds106tv, film, movies and tagged bavafest, cinema, Evil Eye, film, mario bava, movies, sagrado, TGWKTM, The Girl Who Knew Too Much. Bookmark the permalink.

4 Responses to The Evil Eye