Sometime in November or December of this past year Serena told be that there was a core, underground group of Bryan Alexander fans here at UMW. It doesn’t entirely surprise me given I’m one myself, but I found that the attraction to the internet’s favorite mountain-dwelling goth was not necessarily about his blog (which is my favorite), but rather his tweets. In fact, when we were at the ELI conference in January of this year Serena decided to develop a WordPress plugin dedicated to Bryan Alexander’s tweets, and she has been sporting it on her blog for a while now. 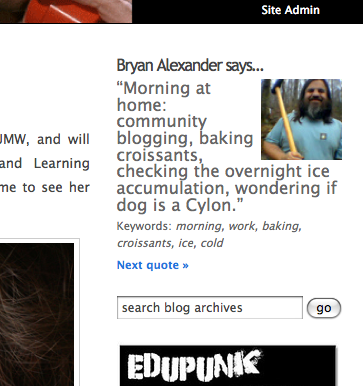 But it was until this afternoon that she finally gave me the code she has been guarding jealously for months, so that the bava too can show its appreciation of everyone’s favorite backwoods vampire hunter. I’m trying to hack the code a little more so that the quotes from Bryan’s twitter stream come pre-populated in the plugin, and if I get Serena’s (And Bryan’s) approval-this will be UMW Blogs’ first home-grown plugin available to the entire communtiy. It just seems so appropriate to me to honor a patron anti-saint and further accentuate that this technology is all about people 🙂