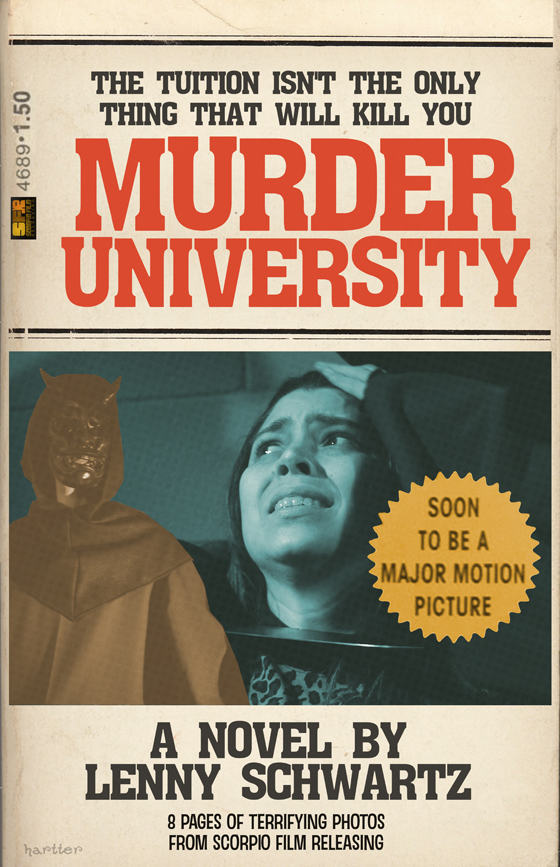 One of Sean Hartter’s many awesome designs for Murder University

Due to funding cuts, 470,000 community college students are beginning the fall semester on waiting lists, unable to get into the courses they need. Enrollments are down 17% from 2008, representing almost exactly the shortfall of 470,000 places. California’s community college system, the nation’s largest, has suffered about $809 million in state funding cuts since 2008. It faces another $338-million hit midyear if voters reject a tax measure on the November ballot supported by Gov. Jerry Brown.

Via Tony Bates, half a million students can’t get community college courses in California due to budget cuts. Jesus Christ! That’s an educational epidemic right there. I’ve told this story before here, I’m sure, but in 1991 I headed out to Long Beach, California to put myself through undergraduate. I attended Long Beach Community College for a year and a half at the total tuition cost of $105. That breaks down to $35 a semester. I remember this because I could pay my community college tuition after one night of bussing tables at Parker’s Lighthouse. This, in turn, enabled me to then apply and get guaranteed admission to places like UC Santa Cruz, UC Berkley, and UCLA—at the much more inflated price (at least at the time) of $500 a quarter, but I could still pay that with my job at Audio Visual Services in a semester. In our moment, you can’t even get into a class, it’s not an option, years of your life towards any idea of educational advancement are basically stonewalled. If there are any questions about the disinvestment of public higher education you really don’t have to look any further than California right now. It is a horror movie, and the tuition isnt the only thing that will kill you anymore.