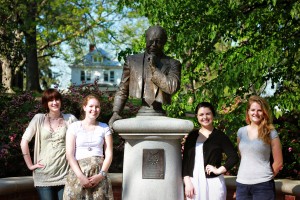 “The James Farmer Lectures: Group Portrait 1” by ModernSelkie on Flickr

More than five years ago I started working with UMW’s archivist Carolyn Parsons to try and digitize James Farmer’s video lecture series recorded here at UWM in 1983. The lecture series was pretty awesome, and it basically revolved around James Farmer, one of the greatest orators of the 20th century, re-telling his compelling experiences as a civil rights activist in the South during the 1960s. I dropped the ball on that project a long, long time ago, but thankfully for everyone Jeff McClurken’s and four of his students in Adventures in Digital History class didn’t.

The vertical hold on the VHS tapes with the first 4 lectures were in such bad shape that they’ve been shipped out for professional preservation, however the audio has been captured and archived. The other nine videos are working perfectly, and I recommend you do yourself a favor and listen/watch to this legendary figure talk about Civil Rights during the 60s—it is truly amazing stuff.