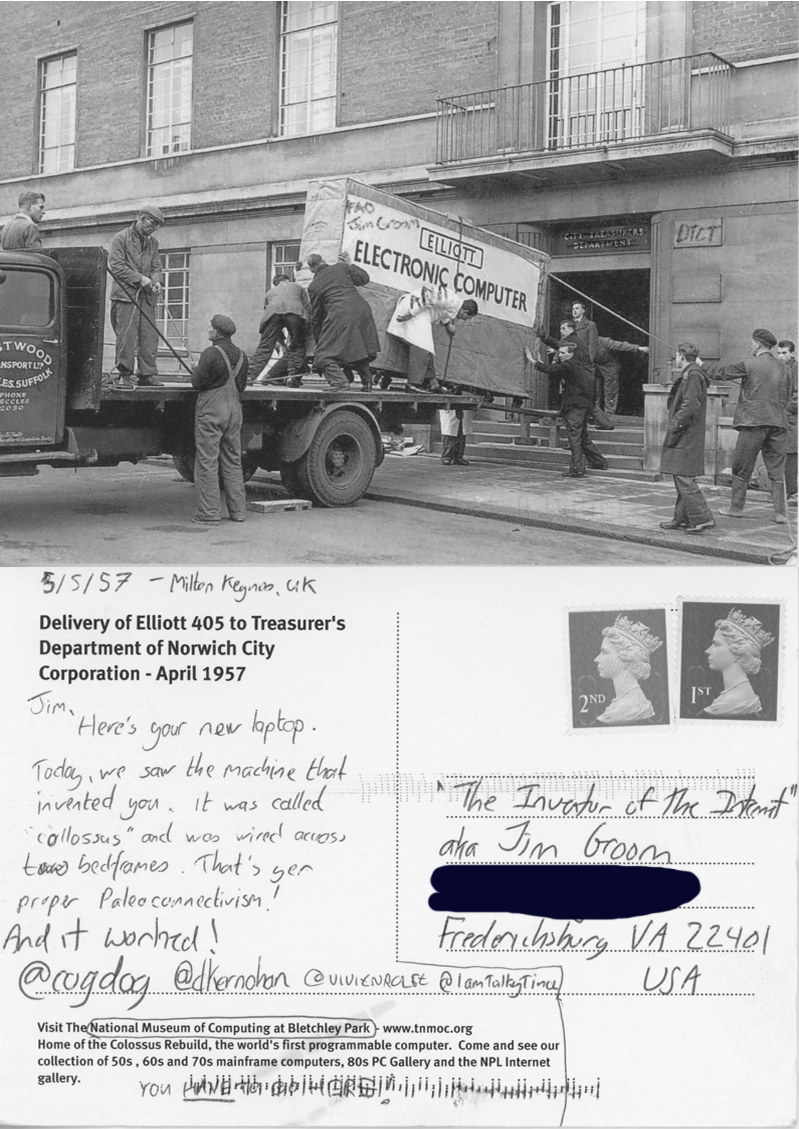 A ds106 communal postcard from Britian 🙂

I received the above postcard from the U.K. this past Friday, which was appropriate given it came the same day I was informed the Internet Course would be running during the first summer session—a week from today ! I was sure this class wouldn’t fly given there were only three students signed up since March, but it seems there was a last minute surge and it got approved. I’m actually thinking the next five weeks might warrant an in-depth exploration into the history of the internet with this group. I’ve been moving in that direction anyway during the Spring semester, but this awesome postcard from Vivien Rolfe, David Kernohan, Talky Tina?, and Alan Levine seals it. The scene in the postcard capturing the delivery of  the Elliott 405. The museum is also home to a rebuilt Colussus, the world’s first programmable computer. It is pretty awesome—the digital in 1940s England seems so antithetical somehow—very paleoconnectivist, if you will . Here’s a nice bit from Wikipedia about the Colussus:

Colossus was the world’s first electronic digital computer that was at all programmable. The Colossus computers were developed for British codebreakers during World War II to help in the cryptanalysis of the Lorenz cipher. Without them, the Allies would have been deprived of the very valuable military intelligence that was obtained from reading the vast quantity of encrypted high-level telegraphic messages between the German High Command (OKW) and their army commands throughout occupied Europe. Colossus used thermionic valves (vacuum tubes) to perform Boolean operations and calculations.

Vacuum tubes for Boolean operations and calculations?! The “Boolean Vacuums” would be a great band name. I love this stuff, and this postcard made my weekend. I was impatiently waiting to scan it so I could share the love as far and wide as possible. Old gold computer history #4life!

The National Museum of Computing is now very high on my list of palces to visit worldwide, and I am wondering if we have something like it the States? I can’t really think of anything in D.C.? Anything similar come to mind where the national history of US computing is narrated and curated in physical space?

This entry was posted in fun, The Internet Course and tagged Colossus, tic104. Bookmark the permalink.