There’s a lot to report out about this year’s Open Education Conference (#opened13), George Siemens already blogged about David Kernohan’s remarkable documentary keynote which I was lucky enough to catch. I was sorry to miss Siemen’s keynote, and almost equally sorry to miss Andrew Ng’s keynote given how “disruptive” it was 🙂  That said, I thought Audrey Watters‘ keynote was truly a beautifully wrought deconstruction of the mythos of technological solutionism that defines much of the popularized vision of our cultural moment (recent films like Cloudy with Chance of Meatballs 2 and The Internship confirm this popular world view in very eerie ways). It was a thoughtful, pointed, and downright punk rock presentation! What’s more, there were even a couple of Cthulu slides. 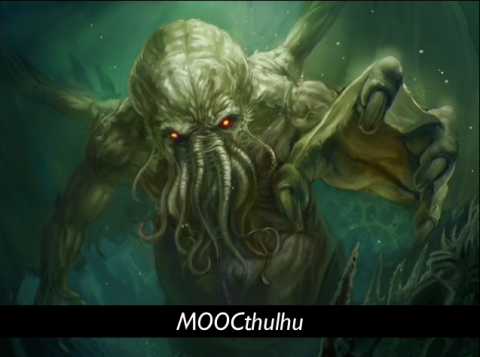 In fact, there were more than a few excellent presentations I attended, tons of amazing people (some old friends and many new acquaintances), and a very mellow, inviting vibe. I’ve been to every other OpenED conference since 2007, and this may have been my favorite one to date. Part of this could be because I spent a good amount of time groking the mind blowing maturation of the publishing infrastructure Novak Rogic and his amazing crew at UBC have been building for the last four or five years. I’d argue there’s no other university web services group in North America doing such wildly innovate web development in-house. UMW has a ton to learn from them, but this will require its very own post (coming soon).

All this said, I particularly enjoyed this year’s OpenED conference because I got to experiment with a guerrilla presentation/art installation I’ve been dreaming about doing since 2008 when I Antonella and I saw a 35mm slide projector that projected single word exclamations on a screen in a dark room every 3 or 4 seconds at the Hirschhorn Art Museum (this piece was part of a larger installation featuring works from Giuseppe Panza’s collection of minimalistic and conceptual art). I found it mesmerizing, the single words were big concepts like FAITH, GOD, DEATH, SEX, LOVE, HUNGER, etc. I was struck by this immediately, and was wondering what it would be like to have such a presentation focused around our the concepts in out current IT infrastructure at universities, something like SECURITY, PRIVACY, EMBED, IT, GLOBAL, EFFICIENCY, DISTRIBUTED, etc. More than a few times over the past five years I’ve wanted to do this, but I’ve never been able to pull it together. So, when Tim Owens and I started talking about what we could do to promote Reclaim Hosting this idea came to me, and we decided to do it! 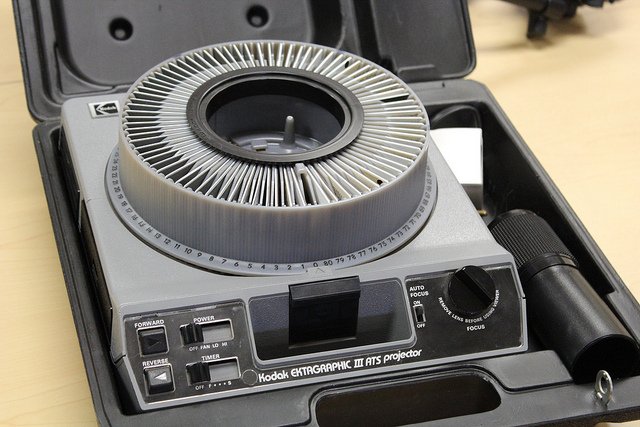 It was literally a week before the conference, and a ton of stuff had to fall in palce for it to work. First and foremost, we needed a 35mm slide projector and at least 80 empty slide casings. Thanks to UMW Art History professor Jean-Ann Dabb we got a old gold Kodak EKTAGRAPHIC III slide projector along with extra bulbs, a carrying case, and more than our fair share of good will! And thanks to Fine Arts professor Carole Garmon we got both ideas and the materials to create the single word slides using heat-tempered acetate (artists are the OG makers!). Thanks to the UMW art community I actually got the necessary equipment to accomplish the installation in less than 48 hours.

Now, if that wasn’t enough, while Tim and I were talking about the idea Martha Burtis suggested we resurrect Dr. Oblivion so he can play a part in the installation. The idea being we could have Dr. Oblivion speaking to people (meidated by a TV set of course) about the larger philosophical vision behind reclaiming one’s online identity (data is the NEW FLESH!), but being sure he doesn’t shill for a hosting company. Oblivion is a big thinker, not a two-bit salesman. So, I actually took portions from the screenplay of David Cronenberg’s Videodrome and re-wrote them so that the TV screen was now referring to the world wide web. It was simple and fun to do, and Tim actually wrote the larger frame I fit this script into (collaboration all the way). You can see the whole text here. [This is an excellent example how an idea in DTLT’s office quickly becomes a collaborative project that becomes infinitely better as a result of four or five minds rather than one.] 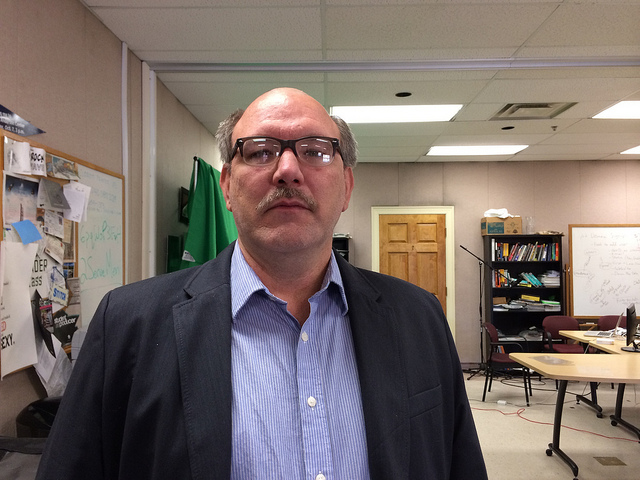 From there we needed to shoot the video, which required me shaving my head and beard and once again taking on the persona of Dr. Oblivion—something I kinda enjoyed this time around. The degree to which I can dramatically alter my physical being with a razor is truly remarkable. Between Tim and I, the video was a one shot affair, and I think it came out rather well considering. The idea was to have it loop on an old school 1980s television which would be waiting for us in Utah. Cool fact, we got our hands on an old school TV 14 minutes after posting the request on Twitter thanks to the great Jared Stein. And soon after got our hands on an old school VCR as well thanks to Mark Suman (to think I talked smack on Canvas at OpenEd—what a jackass I am).

OK, so with only three days before the conference we got the slide projector, a looping video of Dr. Oblivion (I believe Tim got it to loop on an actual DVD using iDVD), and a 1980s TV and VCR waiting for us in Utah. The last thing we needed to do was create 80+ slides with the stark IT/Open Education word concepts that might elicit some kind of response (dare I say emotion?). For this, we opened up a Google Doc and asked people on twitter to add in words they thought might work. Within half an hour we had over a hundred words, and we edited them down to 83. After that , Tim put them in MS Word Mail merge we lined them up as labels, and printed 83 words on heat-tempered acetate so we could create 83 slides (only 80 fit in the carousel, but I wanted a few extra in case). The printing, cutting, and assembling the slides was a manual process that took Ryan Brazell, Tim, and I a bit of time, but was oddly satisfying at the same time to be working with this old school technology, and building a presentation/installation by hand. 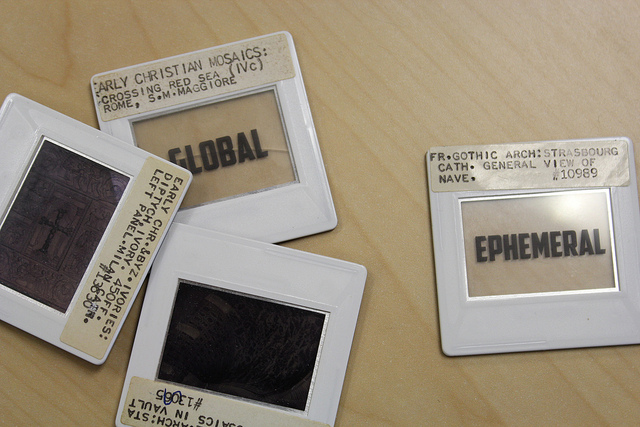 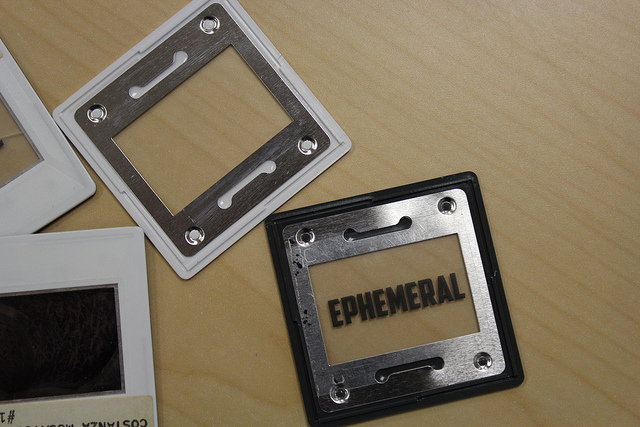 And with that we completed the preparation for the installation. There was still a bit more to the setup once we got to Utah, but before I get to that, I just want to quickly note how cool it was to approach this project as a guerrilla installation. Not only was this collaborative approach different from how I’ve gone about most presentations, but the preparation was so much more than google searching images, knocking out some slides, and canning another logical talk—this was art, dammit 😉 It was hands on. Between reaching out to people in the academic community at UMW, figuring out how to physically make old gold slides, working with a mechancial 35 mm slide projector, opening up the process to others on Twitter, connecting with people across the country to provide 1980s accessories, and altering one’s physical being to make a looping video for something more than another dog and pony show. Like with ds106, and the Summer of Oblivion specifically, it felt like we were  building something. And I am realizing there are few better feelings in the world.

Tim and I got the slide projector on the plane with no issues, picked up the VCR and TV, and made it to Utah without a hitch on Wednesday. The idea was to have the slide projector and looping video of Oblivion run all day Thursday somewhere in the conference hotel.  There was no clear space as we walked around Wednesday afternoon, and between one thing and another we didn’t have the time to figure it out Wednesday evening. So, first thing Thursday Tim and I got up at 7:00 AM and starting scouting the conference space. We decided the best possible place to put the slide projector and TV/VCR was at a junction hallway space that joined the three break-out conference rooms. This area would be highly trafficked during the afternoon, and would allow us to keep it running for more than eight hours. As we were scouting on of the Canyons Resort AV people asked us what we were doing, we asked  if they had any extra screens and projection tables, to which he quoted us a figure of $185. Given our funding was tight, we pleaded for charity given we were setting up a guerrilla art installation using a 35 MM Projector that we dragged all the way from Virginia. As soon as he heard 35 mm slide projector he was sold on helping us. He was intrigued by the old school technology (having dealt with it in another life) and became a major fan of the installation. He gave us a screen, extension cords, a table to set the projector up on, and ultimately a TV when we found we couldn’t get the input on ours to change without a remote, all for free. 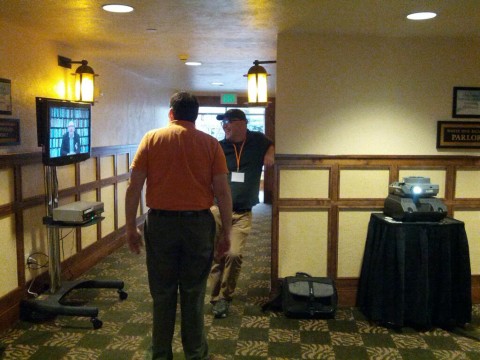 We had it all set up by 8:30 AM (well before the keynotes at 9:00 AM). Above is an image care of one of Jon Becker’s innumerable tweets at the conference. The final touch is we left  a bunch of Reclaim Hosting cards on top of the VCR and walked away (notice the subtle difference in the two designs below. 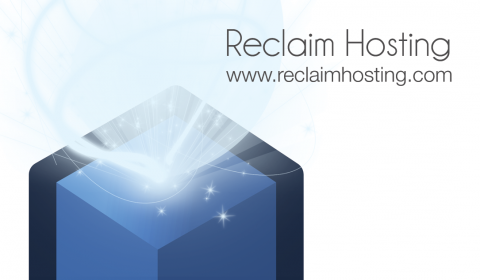 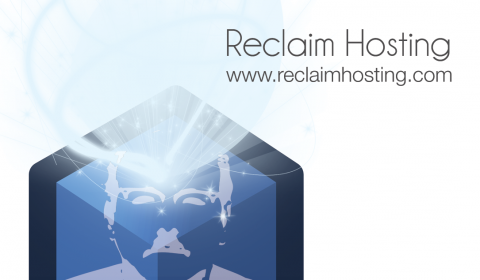 I would wander by it on occasion and given I was wearing a hat and had shaved the moustache there were a lot of people who had no idea I was the good Dr. That said, there were even more who didn’t care about the installation at all, it was simply background noise. The syncopated switching of the slide projector and the monotone droning of Dr. Oblivion about the new, digital flesh became part of the space. People walked right by it, had the slides projected on their back, or generally were unphased by the future, and that is beautiful, that’s when it became art for me because the future is always a disregarded reality few pay attention to because they forget it’s already here. IT’S ART. DAMMIT.

Michael Branson Smith and I were talking about this installation over the course of the day because he and I (along with Brian Lamb and Tom Woodward) were toying with the idea of doing a GIF installation in New York City last Spring. Ultimately, it didn’t work out, but we got to talking about how cool it would be to create GIFs with a 35mm Slide projector as one of many pieces within a larger show about GIFs. I’m fascinated by the idea, and hope we come back to it soon. Anyway, Michael was awesome enough to capture the installation with a few short videos that I’m embedding below. And with that, I’ve officially documented by first installation piece, but hopefully not the last!