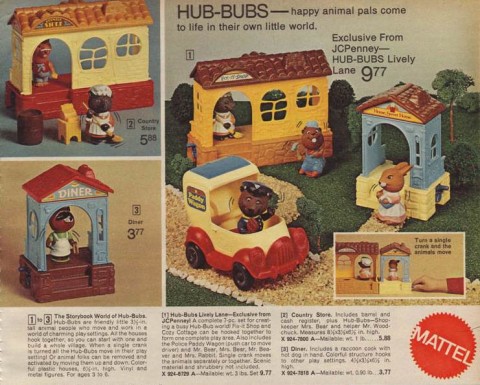 The Hub-Bubs held a kind of special place in my toy heart. They weren’t necessarily popular, or at least I don’t think they were, but they were really fascinating in that they were rather small (3 1/2″) and came with their own houses that could be joined together to create a village. They hit the market in 1975 or 76, and in many ways pre-dated my major fascination with the Smurfs, which became one of my earliest adolescent obsessions, surpassing even Atari and Star Wars. What I particularly liked about the Hub-Bubs is that they reminded me of some of the characters from my favorite childhood picture books by Richard Scarry (whose books have a lot in common with the Sears Xmas catalog)—although Richard Scarry came out with his own line of toys in the 70s which weren’t nearly as cool as the Hub-Bubs, but more on that anon. It sounds silly give these were plastic toys that were disposable by design, but I always associated the Hub-Bubs with a higher level of toy crap that many other toys copied, but very few perfected in the same way.

This entry was posted in 1102xmaS and tagged 1102xmaS, Hub-Bubs, toys. Bookmark the permalink.