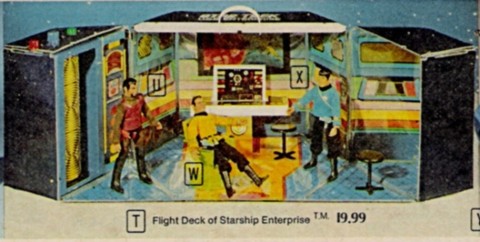 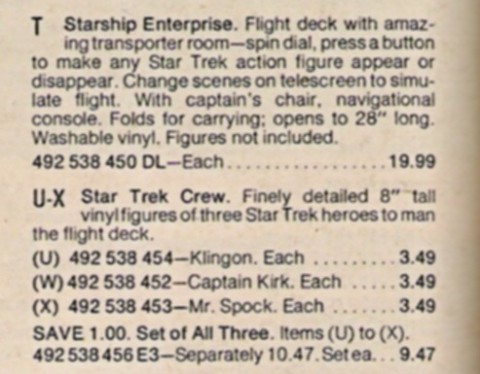 In the 70s I was forced-fed the Star Trek re-runs as a child, and I probably saw the entire series, though I don;t remember much of it.  In fact, I was never really a big fan of the series at all and I’m still not, and when gien the chance to choose between Twilight Zone and Star Trek as a kid Star Trek never won. But it was unavoidable, but rather than enjoying the characters and plots—I was much more into the transporters, communicators, and laser guns.  And the Starship Enterprise flight deck toy was a work of design genius in this regard.  The whole box frame was brilliant, and the spinning transporting room which hid your figures was a perfect touch. Moreover, the moveable screen that simulated flight blew me away as a kid. Unlike the Halls of Justice for the DC Supershero figures, the Enterprise was worth the $20.00 at the time, which was a small fortune.

This entry was posted in 1102xmaS and tagged 1102xmaS, Star Triek, toys, Xms. Bookmark the permalink.