Day 109: Planet of the Apes figures 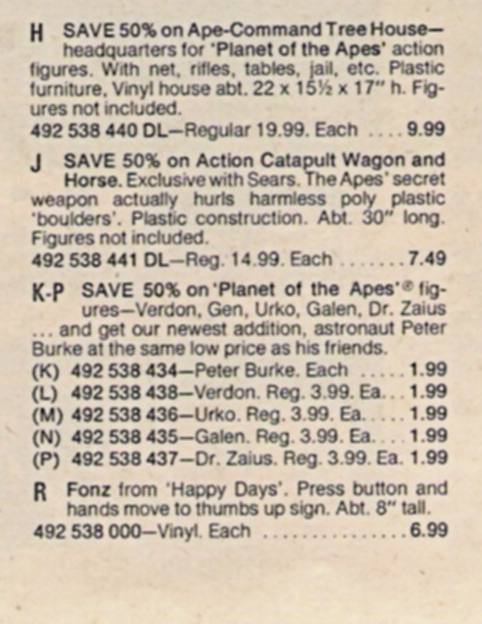 I don’t think there are too many cooler toys than the Planet of the Apes figures.  And their loose fitting, spandexy outfits were only half of the fun. The other half was the wide variety of 8″ gorillas, chimps or orangutans, not to mention astronauts. My brother was a major Planet of the Apes fan and had all the figures and the sets they ever made(including the Fortress and remote controlled horse) and I was lucky enough to share a room with him.  I played endlessly with these figures, and caught the film marathons on channel 9 in Long Island which I think was WWOR-TV—one of the best channels ever.

Here is the early commercials for the figures from Mego.

My favorite doll was General Ursus, I loved his military head dress, and just what an utter bad ass he was. I would lock humans up in the fortress and have the General mercilessly beat them for days on end. For, as he noted in Beneath the Planet of the Apes (1970), “the only good human is a dead human” (a very wild re-purposing of Orwell). Here’s the scene in case you forgot:

This entry was posted in 1102xmaS and tagged 1102xmaS, planet of the apes, toys. Bookmark the permalink.

2 Responses to Day 109: Planet of the Apes figures