Conquest of the Planet of the Apes – “Lousy Human Bastards” 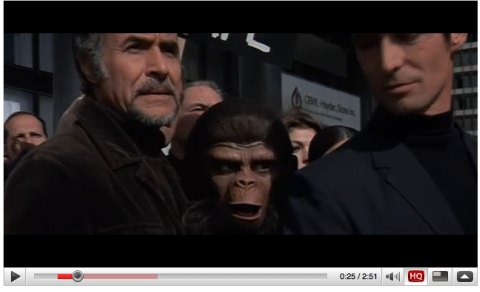 Click on the image or this link to view video.

You will get a sense of both the violence and fascism in the scene linked to above, wherein Caesar (Roddy McDowall) actually speak in public for the first time after being outraged by the brutal treatment of a fellow ape at the hands of humans.  His “lousy human bastards” is a throwback and inversion of Heston’s “damned dirty apes” line. And, as an aside, it must be said that Ricardo Montalban was made for this role, he plays the perfect compassionate human. The evolution of this series is really brilliant, and watching Cornelius training and mobilizing the other apes is brilliant—and when they get armed and revolt, I was nothing but transfixed. One other thing I really enjoy about Conquest is the way it uses the built environment of Los Angeles to convey a very convincing and memorable futuristic set. Most of the outside scenes were shot in LA’s Century City Mall, which is featured nicely in the above clip, highlighting the ubiquitous stairways of this outside mall leading from store to store. Pretty remarkable these used an LA mall to frame the dystopic/fascist vision of the future. Conquest may possibly be the best sequel in terms of plot, action, and horrific subtext that may be the only other film in the series that comes even remotely close to the genius of the original.

This entry was posted in scenic and tagged Conquest of the Planet of the Apes, film, movies, Ricardo Montalban, Roddy MacDowell, sceneic. Bookmark the permalink.