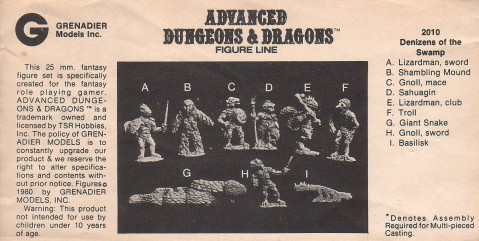 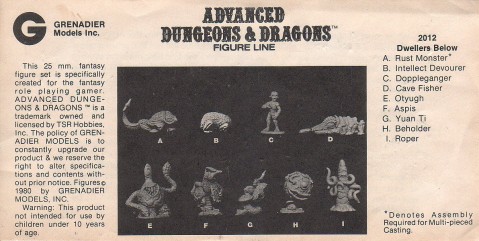 The AD&D lead figurines were probably were probably my favorite elements of Dungeons & Dragons along with the handbooks. I loved the cover art of these boxes, particularly the two pictured above: “Denizens of the Swamp” and “Dwellers Below.” I’ve always been taken by Lizardmen, Dopplegangers, Basilisks, and Beholders, and these boxes had all the coolest monsters. I got these sets at a local comic/hobby shop called The Incredible Pulp, and it was one of my favorite stores as a kid.  Not only did they have Joust and Galaxian in the way back, but the store itself was stock full of comics, figurines, and Dungeons & Dragons paraphernalia.

In fact, I discovered my first maker culture at this shop. There were all kinds of dioramas of dungeon scenes featuring painted AD&D figurines, and once I saw that I was hooked. People had spent time making these settings, and films like Clash of the Titans seemed to come alive in The Incredible Pulp, it was truly  a mecca for a young imagination. Once I had my figurines, I had to figure out how to paint them, and luckily I had an older neighbor, Billy White, who was a master figurine painter so I apid him $1 per figure to paint a few of them so I could get a sense of how he did it. It was worth every penney, because I could see how he used color on the lizardmen, and the way he worked in the brown around their outfits and the like. He was extremely gifted, and I while I painted a bunch of my own, they were no where near his masterpieces (lucky I had him paint my favorites like the lizardmen, beholder, and the doppleganger).

I loved these figurines, and while I lost all the originals, I actually spent a small fortune a number of years ago buying up a number of the original Grenadier sets, including the Halflings, Theives, Specialists, Dwarves, and Fighting Men.  As might be expected, the monsters were much harder to get on Ebay, and I am still searching for the Dwellers Below (which I have to beleive is the most difficult to fins) and Denizens of the Swamp. I will get them eventually, and my plan is to bust out all my AD&D stuff for Tessy and Miles in a 4 or 5 years, and introduce them to the literature as well as spend some serious time painting these figures that truly inspired a sense of wonder at the human imagination for me when I was 10 years old.

For more about AD&D figurines, check out this post from on Yoyorobbo’s “Back in ’81” blog, which is where I got the above images—thank you Yoyorobbo for putting this stuff out there, hope you don;t mind the filch.

This entry was posted in 1102xmaS and tagged 1102xmaS, AD&D, The Incredible Pulp. Bookmark the permalink.