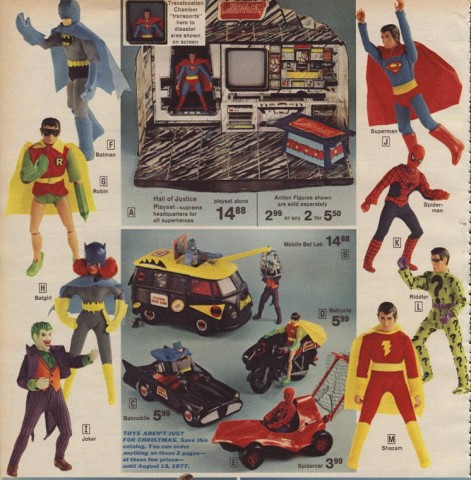 If you grew up in the seventies there was really no way to avoid Mego’s “The World’s Greatest Superheroes” collection, which featured both DC and Marvel figure.  Here’s a list of them all I snagged from the Mego article on Wikipedia:

These figures were the envy of every kid for just about a decade, and were the staple of just about every suburban home. I was a fan of Batman, Robin, Invisible Girl, Lizard, Spider-Man, Green Arrow and Riddler. But more than any one figure, the most amazing thing about the series was the weird ass suits made of cloth than kind of hung on the figures.  They always looked disheveled and kind of like homeless superheroes. Add to that the crazy oven mitts sported by Batman and Robin, and what you have is without question one of the most memorable toy lines of the 70s.  I cherished my Mego figures, and actually still have Lizard and Spider-Man. Posts like this make me want to head over to Ebay and buy the rest, which I would if I wasn’t always so broke.

Check out the World’s Greatest Superheroes comemrcial from 1976, it is amazingly telling about how sick this collection was:

Toys like the Mego figures bring me to the height of nostalgia, because action figures epitomized for me the most powerfully hypnotizing draw of the market economy built around toys. The irresistible lure of getting figures designed in the image of characters you dreamed about being. In many ways action figures—alongside video games—represented (and still represent for me) an unbelievably powerful example of objectifying the imagination while at the same time bringing it into action. One of the most powerful memories of my childhood took place on the night I returned home after seeing Star Wars in the theater in 1977 for the first time. When I got up to my room I committed myself to trying to make a figure of a Tuscan Raider—it was a way of materializing the vision so powerfully etched into my imagination after watching that film. I needed to somehow recreate it, make it palpable and malleable. I failed miserably, and, parenthetically, I fell asleep under my bed in the aborted creation process only to wake up to a neighborhood-wide manhunt for me. But the desire for that object of the imagination sparked by media—or is it shaped?—-has not gone away.  And is at the very heart of the toy market which is driven by somethng far deeper and scary than consumerism—it’s a desire for externalized embodiment in a ill fitting cloth suit punctuated by over-sized rubber boots 🙂

And then to speak of childhood dreams, there was the Mego shopping spree, which basically came down togiing a wide-eyed, toy obsessed child a 15 minute shopping spree in his or her favorite toy store with license to take as many Mego toys as they can put their hands on. How sick was that promotion?! I would fantasize about that possibility endlessly. Here’s the commercial, and it’s almost too much to watch for me.

This entry was posted in 1102xmaS and tagged 1102xmaS, mego corporation, Spider-man, The World's Greatest Superheros, toys. Bookmark the permalink.