Digg Down, DRM Up

I was scrolling through my google reader early this morning when I realized that something was amiss with Digg. Just about every article title in my digg folder either displayed or made reference to Hurley‘s jinxed holy grail of HD-DVD numbers (or the decryption key to unlock HD-DVDs). Additionally, users were prefacing these numbers with titles like “Censorship and the downfall of Digg.” I realized that the users were “revolting” against the editors choice to pull all posts that contain these sequential numbers. Thousands of users were forcing each and every article with the forbidden key to the front page. So, I followed a link to see what all the craziness was about when I got the following message screen: 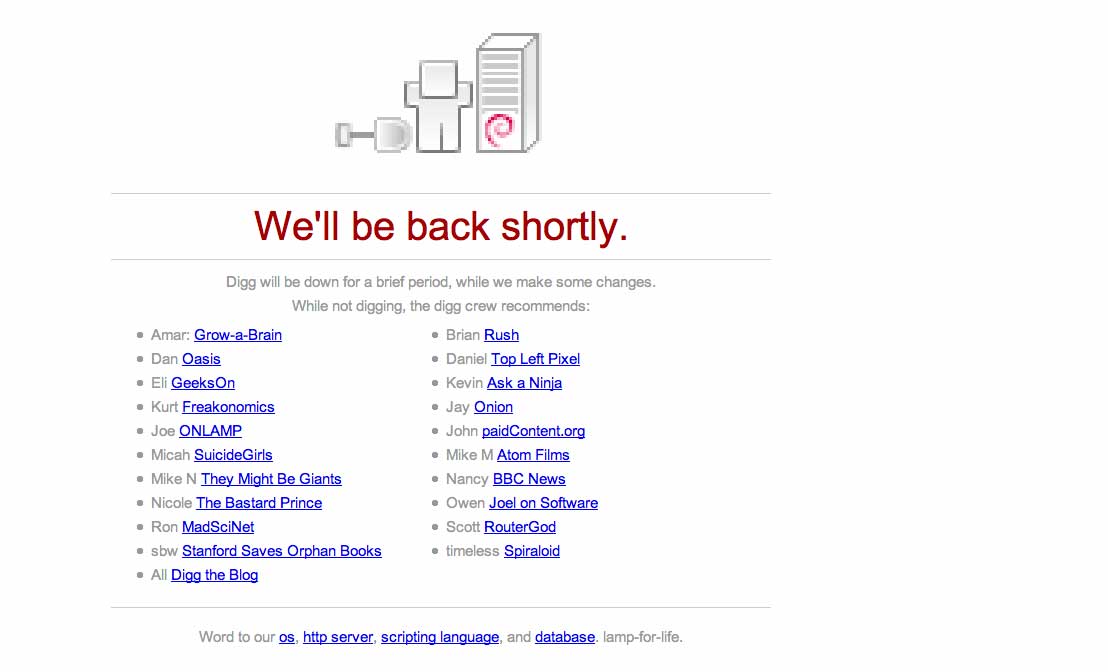 The digg site went down briefly (whether taken off line or just over run is unclear), soon after which the following message from Kevin Rose (Digg’s founder) appeared:

Today was an insane day. And as the founder of Digg, I just wanted to post my thoughtsâ€¦

In building and shaping the site Iâ€™ve always tried to stay as hands on as possible. Weâ€™ve always given site moderation (digging/burying) power to the community. Occasionally we step in to remove stories that violate our terms of use (eg. linking to pornography, illegal downloads, racial hate sites, etc.). So today was a difficult day for us. We had to decide whether to remove stories containing a single code based on a cease and desist declaration. We had to make a call, and in our desire to avoid a scenario where Digg would be interrupted or shut down, we decided to comply and remove the stories with the code.

But now, after seeing hundreds of stories and reading thousands of comments, youâ€™ve made it clear. Youâ€™d rather see Digg go down fighting than bow down to a bigger company. We hear you, and effective immediately we wonâ€™t delete stories or comments containing the code and will deal with whatever the consequences might be.

If we lose, then what the hell, at least we died trying.

As Brian Lamb said via IM as this was all unfolding, “It would make for an interesting case study.” It sure would! I have very few facts, but that won’t stop me from imagining!! Think about it, here’s a service, (fill in corporation, university, government, etc.) that actually had to answer to someone for its actions or be called out continuously until they offered an explanation. Reminds me of a process I wanted access to while listening to the Vice-President of Haliburton on C-Span expediently dismiss any and all of her corporation’s accountability for earning billions of dollars as a result of murder, terror, and carnage while at the same time failing to honor its government contracts, agreements, etc. During this numbing discussion which took place in dialogue with several Senators, I found myself saying, “Why can’t we just revolt against these vampires that are sucking the world dry?” Well, it’s never that simple, but watching my reader light up with people who were frustrated and tired of being continually violated brought a small inkling of promise to a weary political soul.

This entry was posted in Uncategorized and tagged web 2.0. Bookmark the permalink.

1 Response to Digg Down, DRM Up