A couple of years back I had the idea of getting a drone to take along with me on some of the hikes I’ve done in the Italian Alps. Almost exactly a year ago I did an epic hike through the Dolomiti mountains that having a drone along with me would have been amazing. In fact, the whole idea of my original idea for getting a drone was when Kin Lane stopped over in Trento  in 2018 and got Tommy and I hooked on the idea. But time and momentum is a strange thing, and while I got some more affordable Parrot drones to play around with, I never committed to something a bit more pricey. The other day, on an impulse R&D buy, Tommy and I decided on the DJI Mavica Mini which cost us about 350 euros.* It was a good call, Tommy already was pretty solid at flying a drone given he was the one that really took to the $30 Parrot drones I bought, and he took to the Mavica like a fish to water. 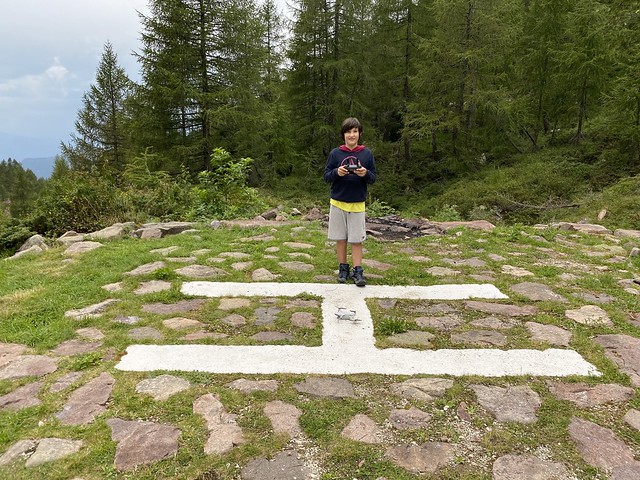 So, yesterday we had our first real test of the drone. We hiked up to 2000 meters (or roughly 6000 ft.) in nearby Val di Mocheni and gave the Mavica a test drive, and I was blown away not only by the footage Tommy was able to get, but how thoroughly he understood just about every feature of the drone in less than 48 hours. He is his mother’s son 🙂

Above is footage from the first flight, wherein Tommaso flew the drone up some 400 meters (1200 feet) to a 2300+ meter peak to capture the cross-shaped lightening rod. The cinematic circling technique is something Tommaso had read about for this drone and used it on a few occasions to great effect.

We then hiked up another 100 meters to the rifugio Sette Selle and flew the drone off a helicopter site that was pretty stupendous. The two videos above are the footage of Tommy flying up to the peak and the second is him circling it through the clouds. It is pretty epic stuff. And to give you a sense of how far the drone travels, below are videos of me recording Tommaso taking off with the drone and another of recording of his getting ready to circle the peak (which you can see the actual footage in the video above):

And the video from the return gives you a sense of how high the drone flies:

Something we noticed that we probably wouldn’t have without the drone worth was that a huge swathe of trees just beyond the perimeter of the forest we were stationed at were all fallen. Turns out they were casualties of the storm known as Vaya that hit Trentino hard two years ago. The unrelenting rain storm led to massive mudslides that wiped out forests all over the region, and this is a pretty good look at the devastation. The craziest part is we were literally 15-20 feet away from it and would have not have noticed given the storm spared just a few trees along the edge of the forest.

Needless to say, Tommaso, Antonella, and I are hooked. We are planning another outing next weekend to try out the drone on some Dolomiti mountains in Alto Adige. It promises to be even wilder, and I am going to collect some of those videos and stories over at drolomite.com (nothing there just yet), although everything there will syndicate here cause that is how I roll.

*Which is over $400 given the shitty exchange rate right now as a result of the global communities lack of faith in the US, another reason to hate Trump and the sniveling, sociopathic Republicans that make his reign of terror possible.