I’m teaching Digital Storytelling for the second time this semester, and we just finished week 4. The semester goes quick, and last time I didn’t blog this course nearly as much as I’d hoped to. So this semester I am trying to build the very assignments for the class into my blogging routine. A means to directly integrate the work I do here with the work I do in class, which makes total sense to me given the entire course is framed around the idea of one’s own space and the framing of a digital identity, both of which are part and parcel of an ongoing, fragmented narrative. It would be silly to try and divorce my work on the bava from the course. In fact, my work on the bava over the years is probably why I’m teaching a computer science course in the first place. My expertise is not in programming, and as an introductory, 100-level course this is very much about the web, and identity on the web as a form of narrative. The class is rooted in the web as a means of story telling, and like the web remains dependent upon everybody’s willingness to experiment, make mistakes, and participate regularly by bringing a sense of wonder and their own interests and visions to the fore on a regular basis and with their own voice.

I’m lucky in many regards because I can teach this course both like a lecture and a studio workshop. It can vary its approach on a regular basis depending on the topic, but at the same time it depends to some great degree upon the extended conversations between and amongst the students that happens on the web, not in class. The second time around this course is proving to be a lot of fun. We have worked through both O’Reilly’s “What is Web 2.0?” essay as well as the recent “Web is Dead” essay in Wired. Everyone has gotten their own domain and set up their own hosting, and folks are continuing to play with themes and plugins throughout the early weeks. And a major shout out to Media Megan who is blogging her work with CPanel and WordPress, providing a tutorial for redirecting the main domain (something everyone will be doing shortly, she just figured it out early), as well as how she got lightbox working on her blog. Those are some serious tutorials right there, and work like this that shares what one is learning, and in the process helps others who are trying to do similar things may be some of the greatest products of this course, and I have so very little to do with them. All I did is push them on a platform of their own, the care and more detailed attention to the contours of that platform is a natural by-product of heading down that road. No one asked Megan to blog everything she did on her blog in this way, it emerged as a process for her, and turns out she is extremely good at it.

This past week we have moved into the realm of visual storytelling, and on Tuesday the ds106 internauts got their first taste of rapid prototyping a story in small groups. Basically at the beginning of class I give them a particular set of parameters, and within a half hour 9 groups of three students each are to come up with a narrative give the restrictions. This is a lot of fun, and it’s kind of like teaching a segment of the class with the demo first. They immediately try making a narrative just based on what they know, and then we go through them, and keep building on that experience for the following two weeks. Anyway, the rapid prototype this week was using Flickr’s “A Story in Five Frames”, they have to break up into groups and basically come up with a story in half hour. It’s some of the best moments in the whole semester when they are lively imagining and framing their narrative, then scouring the web to visualize and communicate it. This semester’s narrative were remarkably good, you can see them all here. I got a real kick out of “Shark attack?” (sharks and zombies proving to be a major motif of this class thus far):

A lovely day at the beach, my girlfriends and I decided to take a dip in the water. All of a sudden, we heard a commotion on the sand. I thought people were checking us out, but they looked frantic. We turned and saw a dark shadow in the waves and realized it was a shark! We ran for our lives and found the relief of the hot sand. We looked back and discovered a fat man in a shark suit trying to scare the beach goers.

After that, I asked them to apply the same logic to an established narrative. For example, try and communicate the story of your favorite film (or any film for that matter) in six frames. Once again this was a really fun exercise to both do (I have been doing all my own exercises right alongside them), as well as to talk with them about in class. We spent almost the entire class dissecting screen shots from films they liked, and asking them to really think about elements of composition. And what’s great, is it is all from their examples. I mean, look how much you can do with a few frames from The Royal Tenenbaums (2001) (thanks and credit to Garrett Bush):

I mean Wes Anderson is as much a painter as he is a filmmaker, and through this shot selection and a quick examination in class we can actually start to breakdown how many of the narratives they love are firmly rooted in visual storytelling, more than that, a particular means of framing that story is what gives that film, show, director, etc. an identity. A sense of style, a vision for communicating in a particular way. Which to me is the whole idea of this class, and it is never to early to start framing your own vision. So right now they are all doing the Daily Shoot assignments for the next week (ds306 through ds313). And I have to say, just about everyone is not only having fun with these daily assignments thus far (the course blog is just filled with brilliant and creative proof), but this series of assignments also gives them an immediate community of others to join in and share with around the web. And I have to thank Alan Levine for turning me on to Daily Shoot (Alan is the web!), because this assignment has me more excited about teaching that I think I’ve ever been before. As a result of this week-long experiment they have to get a Flickr account, get a twitter account, and blog their images. But that is just the technical mechanics, where it gets interesting is in addition to this they have to think about composing and sharing an image based on a general guideline everyone gets each day. A prompt hundreds of other people are also doing that aren’t a part of the class. Which means the ds106 internauts will see and learn from their work, and—and here’s the kicker–vice versa. Hundreds of people will look at and learn from the work coming from this course. What an awesome setup for a class like this.

What’s more, the course blog is really coming together nicely. And the real difference is a streamlined approach to categorizing assignments, projects, etc. that has everything to do with custom menus. What’s nice is their work all feeds into the course blog using the FeedWordpress plugin. And what FeedWordPress can do is convert tags into categories. So I give them a specific tag for each assignment which then shows up as a drop down menu of assignments in the menu navigation of the header. We can also feature the rapid prototype projects like the Image Stories when it is tagged as a story, and breakdown the dailyshoot posts on a day-by-day basis. So, when they tag the posts on their own blog I can organize all their work coming into the course blog through those tags-cum- category. And given custom menus allows you to create page tabs for categories, not to mention slick drop-down menus, I have all the assignments categorized by assignment number, and can even break out separately the Daily Shoot posts. What’s more, I am using the UMW Wiki as a kind of directory where they put in all their own info, like their domain name, blog url, Twitter handle, Flickr address, YouTube account, etc. And as you can see from the directory page in the DS106 course blog, that wiki page is being pulled right back into a course blog page—the blog wiki hybrid (the bionic bliki) has been here for years, I just never realized it. 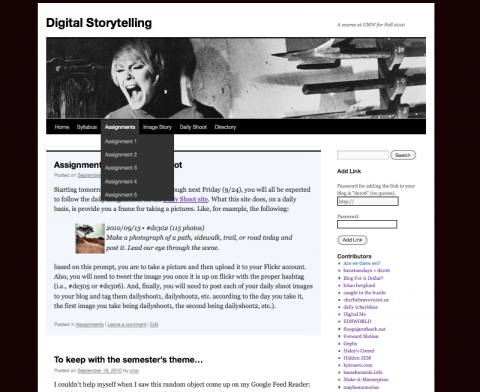 Just like last year, they all add their own domain to the field provided in the sidebar on the course blog (the Add Link plugin), I make sure their feeds are working and then they’re off and running—and the organization is much needed because last semester 29 students had well over 1000 posts. And this semester 27 students are already up to 250 posts, which is a very healthy pace given we didn’t really start blogging until week 3. So, it’s clear I need to get a hold of the streams of different assignments, projects, narratives, etc. Custom menus let’s WordPress function a little more like a content management system than it ever has before, and for that I am grateful. What’s more, with these menus, I no longer have to hack my themes, which means anyone can do this stuff. it has further lowered the threshold for publishing attractive and dynamic content on the web with WordPress.

So, in short, things are good on the Digital Storytelling class front, and I have to get back in picture taking mode, because like with much of what I’ll be doing in several projects, everything that happens is in direct response and in participation with the process of creating, framing, and maintaining an ongoing narrative of one’s self, work, and ideas—I mean that’s what I do. That’s blogging and Flickr and Twitter and YouTube and whatever else. But this class is awesome because it allows me to step back from those things for a second and think about what it all really is, it’s a new and very powerful mode of telling our stories. Of narrating a sense of who and what we are digitally, the “I” that was always assumed in argument papers for your English literature course has come out of hiding. It’s found a new home on the web.

I mean what do you do in a class where images like this are the fruits of a mixed up assignment?

And the title of this image says it all for me, this class is bringing me back home to the wonder of the web, which is something I have desperately needed.

This entry was posted in digital identity, digital storytelling and tagged ds106. Bookmark the permalink.

6 Responses to DS106: An Internet Odyssey