It all started with this Retweet by Melanie McBride this morning: 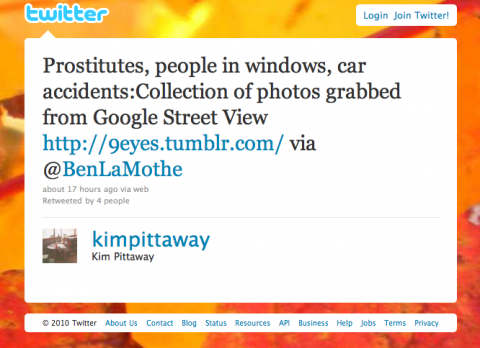 It just so happens that I caught this in the stream and my interrest was piqued when I saw Google Street View mentioned because right now the ds106 internauts are using Google Street View to create a narrative about their childhood home, a particular trip, etc. using Google Street View. And when I saw this link to the “seedy side” of Google Street View I couldn’t resist. Jon Rafman’s Tumblr blog that collects all these images is extremely provocative, and whether or not all the images are real—that aquarium seems like a hard sell as Garrett Bush mentioned in class tonight—a vision of the seemingly invisible realities of the police state, prostitution, public sex, and other random acts of craziness is fascinating.

All this to say I spent part of tonight’s class talking about this site, and sharing the examples. And what quickly became apparent to me is that everyone of these images is a prompt for a story. We all were taken in by them, but also we were let with a million questions, and the idea of stitching the story back together became an almost natural urge. I’d love to do a forensic/detective narrative using Google Street View, or a scavenger hunt on Google Earth, but that will have to wait until I actually have a plan. What did happen tonight, however, was kinda fun nonetheless. After looking at the images, I spontaneously asked the class broke up into groups and tasked them with captioning as many of these crazy pictures as possible in the time left of class. And they did. Not only that, what they did was very, very fun. I really can’t defend the “learning objective” (vomit) of this in-class assignment though, I had no other reason for making them do it other than I had an idea it might be fun, and oh was it ever. Look at the fruits of their sardonic joy.

“Is this how the squirrels do it?”

“I better get out of here before her husband catches me.”

The Pink Portal to the Great Beyond

Welcome to STARK industries…..building the future!

Father time was not nice to you, Skeletor!

Pluto you've got you lay off the acid

Even heroes have the right to dream.

"Mom! There's a spaceship outside!"

Flowers do not equal happiness.

I told you not to text and walk at the same time!

Police Officer “This is how you make the Y! Again from the top!”

Whoa. What happened to the pool?!

2 Responses to DS106 Plays Caption This