ds106: We put the Commie in Community 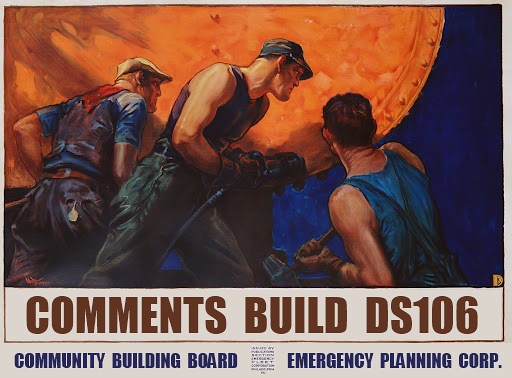 I’ve been thinking a bit about the power of an open community to change the nature of a class taught at a brick and mortar institution given the work I’ve been doing with ds106. There are more moving parts to this whole thing then I can get my head around, but last night while we were broadcasting a few of the student radio shows Rachel McGuirk and Annie Truslow had some pretty insightful comments about how the class changes the nature of how they create based on the open community—and the ability to bring these people into their work helps break down the geographical barriers that are all too often used to define the limits and “sacred space” of the classroom.

What was interesting to me about Rachel and Annie’s comments were how they fit in with another discussion I was having with two ds106 Alumni (in fact they are UMW alumni now) Sarah Kountz and Megan McMillan. Sarah and Megan took the class in the Spring of 2011 right before they graduated (the first open online experiment), and they contacted me via Twitter (we still communicate there regularly) to let me know they would be around this week and would love to meet up. What’s more, they brought along Karen Ellrod who never took ds106, but has an intimate understanding of the course given the communal nature of the work for the class.

We sat down to talk about ds106 (what else would we talk about?) and I videotaped the conversation which I think starts to get at a point Mike Caulfield raised when we were talking on the phone a month or so ago about how important people who have been through a process or had an experience they can share (or continue to share) are to any community. The “elders” of a community, for lack of a better word, give it a vision and a sense of time beyond the arbitrary 15 week entombment of a course. In other words, UMW students like Sarah Kountz, Megan McMillan, Matt Martin, Charlie Rocket, Carlie Hampton, and many, many more are absolutely crucial to the idea of ds106 being about something more than just at class here at UMW.  Many of those listed are still doing drive-by assignments for the course, but more than that they are present and contributing via Twitter regularly.

So, anyway, the idea of community and an idea of culture and sharing that moves beyond the specific boundaries of a class is fascinating to me, and while invitation is crucial, I wonder if part of what keeps students intrigued isn’t also audience, feedback, and a connection to the actual place they spent a good part of their adult life at. One of the things that struck me about this conversation with Sarah and Megan was just how strong their draw to UMW was even after they graduated—and I have a very similar feeling about UCLA still. The power of the experience at college is what we need to communicate around, not the depersonalized idea of an educational brand.

2 Responses to ds106: We put the Commie in Community