On a while yesterday, I tweeted out an image of a figurine that I have had for almost two decades. I found it in the garbage on the streets of Brooklyn back in 1997, and I thought it was about the trippiest thing I’d ever seen. That said, I had no context for it, and hence had no idea what it was.

Found this crazy eyeball monster in someone's trash in Brooklyn back in 1997. Have no idea what it is-but I love it pic.twitter.com/wkHJNFePh5

Well, strange things happen when you throw stuff into the context engine that is the web. The first reply I got back suggested it was Dr. Opticus from the Saturday Morning cartoon Karate Squad.

As is my wont, I was blown away.

@ungodlyracket You totally rule, thank you! I've had this figure for near on 20 years and never knew what it was. #bigfan!

I quickly declared victory given my fact-checker was out to lunch. “The web giveth, giveth, giveth…” Yet, in this instance it gaveth nonsense because there is no Dr. Opticus nor does there seem to be a Saturday Morning cartoon called Karate Squad. [All of which kinda makes me love Or Current Resident, did they just make it up to fuck with me? I hope so.] And that’s all right, because the web still giveth. Alice Campbell swept in with some sweetness and light providing the actual referent: The Mighty Morphin Power Rangers.

.@jimgroom Actually, it's Eye Guy from Might Morphin Power Rangers. Trust me on this.

She even found the original packaging for me with the full, quite literal name: the Eye Popping Eye Guy. 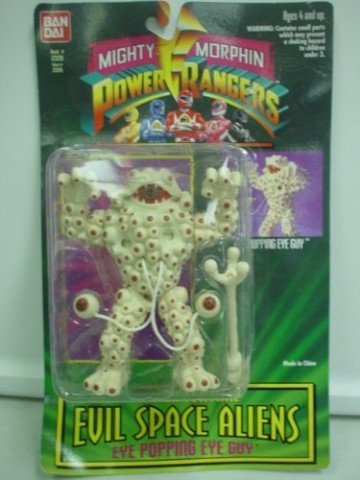 Thanks Alice, you rule. And after almost twenty years of staring into the eye-filled void the veil was lifted in ten short minutes. Many eyes 🙂