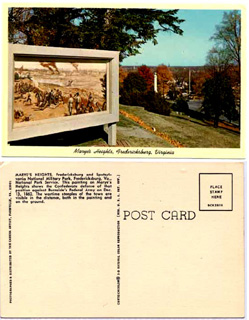 Gardner Campbell just tipped me off on a veritable gold-mine of old postcard images of Fredericksburg, VA offered through the Central Rappahannock Library. Why might this be of interest to a native New Yorker and Yankee through and through, you ask? Well, because my middle name is “Stonewall”! Well, actually, it’s not for I never got a middle name (sniffle, sniffle). A bit more seriously, my interest has emerged from a project I was (and still am) working on with professor John Pearce’s Historic Preservation Museum Interpretation class. We designed a virtual exhibit which features many old images of Mary Washington over the last 100 years, and a site like the one Gardner discovered really starts to suggest just how many great resources there are to work with out there … exciting stuff!

Speaking of which, another thought crossed my mind while the lines above – at Faculty Academy I was on a panel with Carolyn Parsons, Jami Bryant and Patrick Gosetti-MurrayJohn in which we discussed the finer points of metadata, digital asset management systems, and the centrality of libraries and librarians with the new emphasis on cataloging, organizing, and serving the immense amount of digital resources that are beginning to become available. This panel discussed the process we are working out at UMW for gathering and organizing metadata, while at the same time allowed us project about the future possibilities of online resources. After the panel, we had a brief conversation with a librarian at the Central Rappahannock Library, Chris Glover, who was very interested in exploring new ways of tagging metadata and as well as experimenting with open source options for serving and distributing this information. One of the things he mentioned which really struck me while we were talking was that he has numerous groups from all over the region interested in trying to digitize and catalogue their archives (one example was the parks services), and while it is clear that such a job would be best suited for the local public library system -how much of the labor and time necessary is well above and beyond the scope of the all too often understaffed and over-extended public libraries and librarians. In fact, I may be speaking out of turn, the Central Rappahannock Library system may very well have the staff and resources they need to digitize and catalogue thousands of images and documents from numerous groups, although if their budget is anything like UMW’s I highly doubt it.

In NYC when their was a budget crisis of any magnitude the first thing to be cut were public services, and the first public services to go were library services such as extended library hours (which meant for many branched over 20 hours/week), librarians, new books, etc. And while this has always been a crime against the residents of NYC, particularly for residents of the neighborhoods effected, I wonder if and when city and/or municipal officials are going to realize that the greatest investment they could make in organizing for the future, while simultaneously preserving the past is going to be an investment in their library systems. And while librarians themselves still have many questions to ask and answer about best management practices for digital media, it seems their experience and expertise goes a long way towards getting at the root of many issues at stake at this moment – that certainly has been my experience with Carolyn and Jami at Simpson Library. For what other profession is better positioned to start integrating these digital resources into a publicly accessible database that offers knowledge to its constituents as a public service? Gosh, what a great mission a public librarian has! Sounds kinda like that of the public university, no? Don’t get me started … for I have recently heard a certain individual discussing this very topic with GREAT ENTHUSIASM, I wonder who it could have been? (Hint, he provided the fodder for this post!!!)