The night before leaving Fredericksburg a pretty special treat was in store for me, I got to meet the other half of the duo that created the 1986 cult classic documentary Heavy Metal Parking Lot (HMPL). For those keeping score, earlier this fall Miles and I got to see Jeff Krulik at the VHStival at Video Vortex in Raleigh, North Carolina who discussed the making of his film HMPL. We talked with Jeff after the session, and he put Tim Owens on the phone with his collaborator, John Heyn, who also lives in the Fredericksburg area. As it turns out, and not surprisingly, John is as awesome as Jeff, and was more than happy to meet with Tim and chat about his film last month. Fast forward to last Wednesday night, John came over to Reclaim Video to chat about HMPL and much more, as well as to show off some of the fan art folks have sent him over the years. Possibly the coolest VHS tape I have ever seen was amongst the treasures: a custom made HMPL VHS tape that not only had a zebra patterned tape in honor of Zebra-man:

And the VHS case has a button that plays a sound byte from the film: 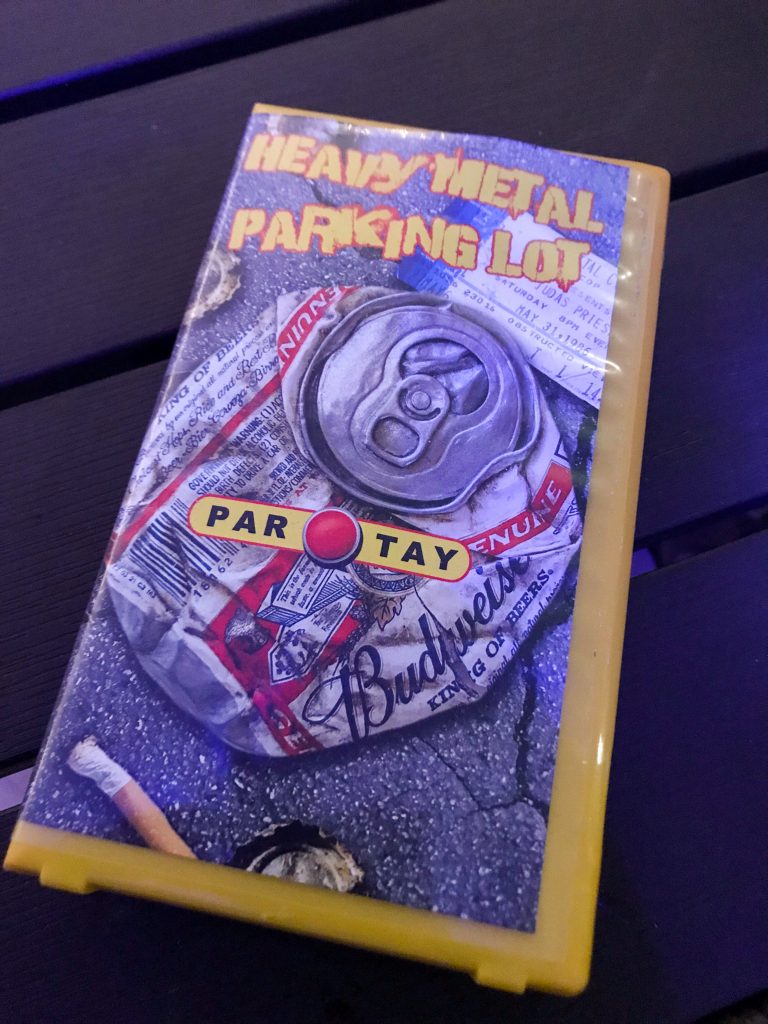 I even had enough foresight to grab a quick clip of John Heyn’s reaction to me pushing the partay button:

It was interesting to hear John discuss how the film has taken on a life of its own, and continues to appeal to new generations of fans. Also, they’re exploring the possibility of a feature film more than 30 years after the fact, which points the the lasting legacy of this 15 minute document of a mid-80s tailgate party leading up to a Judas Priest concert at the the now razed Capital Centre outside Washington DC. There is something special about capturing a time and place on film, and I wouldn’t be surprised if this one finds itself on the National Film Registry’s list of culturally significant films at some point in the future. What’s even cooler is that it was never in theaters, there was never anything resembling a distributor, publicist, etc. It was just a video that went viral in a pre-internet underground network of tape heads during the late 80s that steadily gained momentum over time thanks to the reproducibility of VHS. It’s an unlikely story of a classic whose distribution is in many ways unique to the medium of VHS–making the fact that John came to Reclaim Video to share his experience with us all the more special.

NB: While searching HMPL in Google I realized I actually blogged the film 10 years ago in 2019 when folks used to comment on just about anything I wrote (the golden years of the bava), and at that point I still hadn’t heard about the film, so don’t let me pretend I was an early adopter on this one 🙂