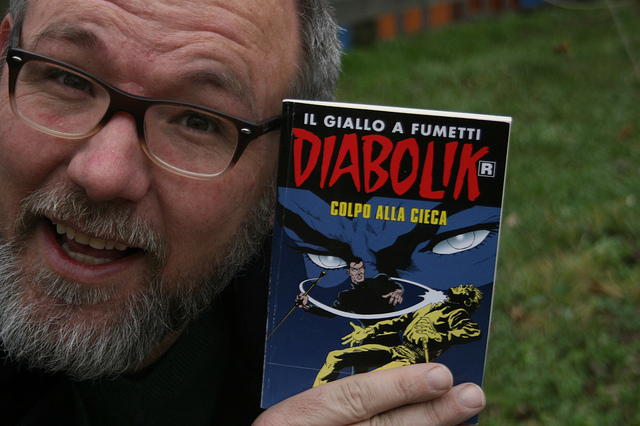 Antonella bought me a Diabolik comic at the Mestre train station outside of Venice, Italy the other day. Diabolik is a fictional master thief and the anti-hero of Italy’s most popular fumetti (Italian for comic) which has been published monthly since 1962. What’s more, it’s  just the right reading level for me—made all the more accessible by a pretty set formula of robbery, ensuing complication, and ultimate resolution in favor of Diabolik. This one was called “Colpo Alla Cieca,” or “The Blind Heist,” in which Diabolik goes blind after a job gone bad and his lover Eva does whatever it takes to help him get his sight back.

It was fun reading this comic because it reinforces just how pitch perfect Mario Bava’s film adaptation of the comic was in Danger: Diabolik (1968). In one of our many conversations about Bava’s films, Paul Bond and I discussed this film and its roots in the comic aesthetic. What’s interesting is that on the cover of each Diabolik comic is the phrase “Il Giallo a Fumetti” which might literally be translated as “pulp mystery comics.” Giallo, which literally means yellow in Italian, is  a term used to describe the pulp crime novels published by Mondadori in Italy during the 1950s. They were called Giallo because they came with bright yellow covers that usually featured a lurid scene of sex or violence or both.

But I don’t think I directly connected the giallo to the fumetti, which I understand is silly. Diabolik is an exaggerated giallo, and it would make perfect sense for producer Dino DeLaurentis to tap  Mario Bava—who put film gialli on the map during the 1960s with The Girl Who Knew Too Much, Blood and Black Lace, and Kill, Baby, Kill—to bring Italy’s crime comic to life.

And from what little I have read, Bava seemed to have an intimate understanding that first and foremost this comic is a love story between Diabolik and his moll Eva Kant. He’s a master theif, an anti-hero, terrorist, etc, but in the end he’s a devout partner and lover in an idealized realtionship wherein the two will do anything for each other. Like in Bava’s film Danger: Diabolik, the action of “The Blind Heist” is predicated upon Diabolik’s decision to steal the most valuable crystal in the world as a sign of his undying affection for Eva. Diabolik is a lover, not a fighter—his crime is rooted in transcending the norms of a culture that values things over relationships, he’s the ultimate rebel who can only express his love for Eva through seemingly arbitrary criminal acts against capital. What’s not to love about this character? Diabolik is to Italy what Godzilla is to Japan!

There are some special color editions of the Diabolik comic around that cost a few more Euro, I might have to pick one up for the great Paul Bond.