Into the mud, Scum Web! Or, picking through the ruins that was WPMu 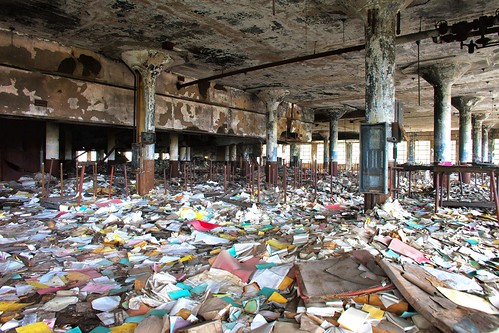 Image credit: Thomas Hawk’s No Dark Sarcasm in the classroom

I’m not sure when I got derailed from the Summer of Love, it was all going so well. And then the bastards, scum bags, and profit-driven web denizens seemed to hang over my thoughts like a dark cloud. I’ve been brooding a lot, and generally gnashing my teeth, in fact I’ve found myself pausing before coffin warehouses, and bringing up the rear of every funeral I meet. And whenever my hypos get such an upper hand of me, that it requires a strong moral principle to prevent me from deliberately stepping into the street, and methodically knocking peoples hats off — then, I account it high time to get back to some tinkering. And the only thing I know how to tinker with is WPMu, which is now gone, so I started playing with WP 3.0 and BuddyPress for a project I am working on (more on this anon).

And for the last few days I have been hacking around in 3.0 and BuddyPress, and doing some research into what is working on UMW Blogs and what isn’t in terms of plugins, themes, etc. And what struck me as I was searching for updated versions of plugins for WPMu (as well as themes for BuddyPress) was just how brilliantly James Farmer has turned the hard, GPL-licensed work of many a WPMu plugin developer that once lived contently on http://wpmudev.org into a subscription-based business model. I mean, it’s as if all those plugins on WPMuDev that the WPMu community consulted and used for years have all but vanished behind a pay wall.

Now don’t get me wrong, there are still a few free plugins there, but the original links to WPMu plugins like Dsaders Userthemes, More Privacy Options, and his Sitewide 3-in-1 Multi Widget Panel have strangely morphed into plugins behind the pay wall. Let’s take a look how this whole SEO, google-inspired, redirect scam works. 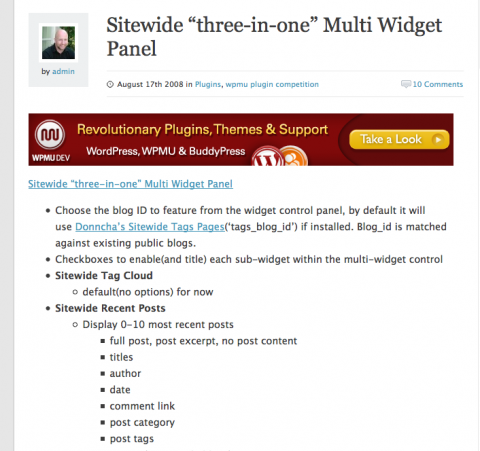 So, I look for the 3-in-1 widget and I get to the above wpmu.org page (no link there from this blog, which reminds me that I need to clean up my database, which has become inadvertently full of links to the premium.wpmudev.org site—given the old links to the plugins on wpmudev.org are now all redirected there….scummy). This post about the 3-in-1 plugin is on wpmudev.org, and was submitted to wpmu.org for the WPMu plugin contest sponsored by Farmer and co. for the last few years, and has since become one of the top hits in google for getting this plugin.

Now, what happens when you click the link to get his plugin…. 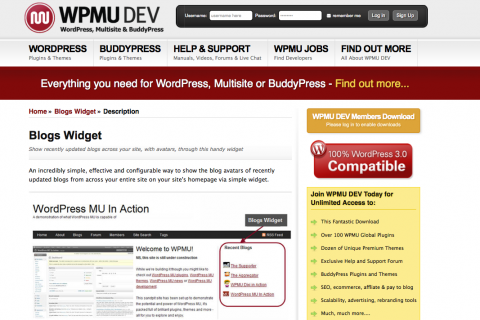 It seems subtle, but what happens here is that wpmu.org is pushing you not to the plugin site (which seems all but gone off wpmudev.org), but rather a plugin cobbled together by the wpmudev premium team that has the same ideas and functionality as dsaders 3-in-1 widget, with one huge difference—its not free to download. Its locked up with the rest of the history of WPMu behind the premium pay wall. And you might say, oh well, such is life. WPMu is defunct now, and those plugins would just be so much internet kipple anyway, so no big loss. In fact, Farmer and his ilk are doing us a favor—they are keeping us clean and honest, not unlike Apple. But what strikes me here, is that those plugins are just as relevant as they were two years ago, we still need to display content from the tags blog in UMW Blogs, and a whole public space of development happened on Farmers server, and when the time was right, he commodified all that work and development to make his brand, seal is google dominance (which is insanely impressive, btw), and I guess he had every right to. He provided the space, and ultimately that means he dicatated the terms. The terms were pretty unilateral in retrospect, and a lot of great work seems all but lost now

And just in the event someone says the example above is an isolated case, let me give you yet another one that I stumbled on while trying to piece together a site. 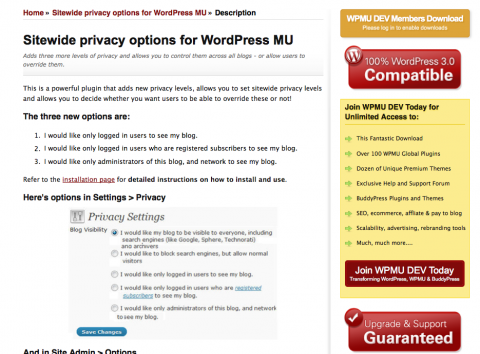 More Privacy Options, which used to be a plugin that you could get on wpmudev.org through a straight link: http://wpmudev.org/project/More-Privacy-Option (I link to that plugin in this post from 2009) and if you follow the link you’ll quickly see it has been transmogrified into a way to sell Farmer’s premium service plugins (links as capital remains its own crazy economy, and one farmer has figured out very well). It points to a page selling their Privacy options for WordPress MU plugin (almost exactly the same plugin as dsader’s, with one or two tweaks for sitewide settings). So, the bava has become a way of driving traffic, and by extension advertising, wpmudev’s premium subscription and I didn’t even realize it. I’m gonna need to erase a whole series of links from my database. Now doesn’t that seem scummy? Not even a redirect to the plugin which is now in the wordpress.org repository, why? Fact is, all these plugins are still relevant, and this link-laid scam makes it seem as if they are all pay-to-play now—how is that for stewardship of a community?

Is there anyone else out there in the WPMu/WP community that sees this shit going on and is like, “Jesus, wpmudev can suck it!” Sometimes I wonder, and add to that they are the only folks pumping out BuddyPress themes, and it would appear that WPMUDev are the main developers for the flagship projects like multi-site and BuddyPress in the WordPress community. Once again, the Google manipulation works, and the emergence of wpmu.org and wpmudev.org as the dominant sites for wpmu, buddypress, and beyond is all too apparent to me these last days of rusty searching.

But then, there is a light, a strong beacon I can hold onto: this list of free (can you imagine that?!) plugins at CUNY’s Academic Commons gives me hope for an developmental education community around blogging, multi-site, themes, and plugins that is not all about link baiting for Google juice to control the world. Long live Boone Gorges! Oh wait, and then there is the awesome work by the hit squad at UBC’s OLT, featured beautifully in this wiki page on their Management Framework development.

My only question is, can the free and open rebellion survive when the essence of the web, a simple url, is being hijacked for profit or eliminated all together by the gold-lined app revolution?

3 Responses to Into the mud, Scum Web! Or, picking through the ruins that was WPMu