In stark contrast to the Uncle John Scruggs video, check out this video of Jack Johnson’s Jazz band performing “Tiger Rag” on December 21, 1929 in the great city of New York, NY. 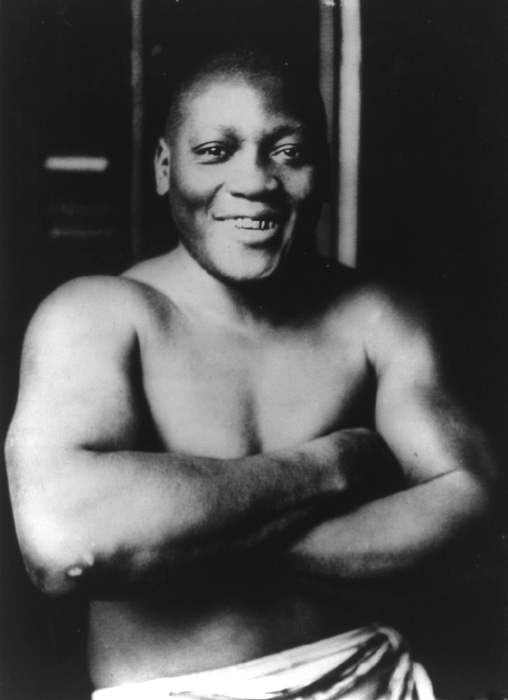 Now, I’m not sure how much you know about Jack Johnson, but if you are new to this phenomenal figure of the early twentieth century, I strongly urge you to read more about him on Wikipedia here. I first learned about Johnson from a Christmas Present I got back in 1999, the book published by ESPN titled “Sports Century,” which was also a series of documentaries on the network. The first chapter of this book is dedicated to Johnson, and after I read it I was amazed by this monumental figure, who may very well be one of the great characters of the last century. His story inspires nothing short of awe, and while he was by no means a saint, his accomplishments in the face of wide spread racism accompanied by his staunch refusal to accept the status quo are remarkable to say the least. He is probably best known as boxing’s first black Heavyweight Champion of the World from 1908 to 1915. And for good reason, for such this title was deeply segregated:

His efforts to win the full title were thwarted as world heavyweight champion James J. Jeffries refused to face him. Blacks could box whites in other arenas, but the world heavyweight championship was such a respected and coveted position in America that blacks were not deemed worthy to compete for it. Johnson was, however, able to fight former champion Bob Fitzsimmons in July 1907, and knocked him out in two rounds.

He eventually did win the title by defeating Canadian Heavyweight champion Tommy Burns in Sydney, Australia in 1908. To quote his Wikipedia article again:

After Johnson’s victory over Burns, racial animosity among whites ran so deep that even a socialist like Jack London called out for a “Great White Hope” to take the title away from Johnson — who was crudely caricatured as a subhuman “ape” — and return it to where it supposedly belonged, with the “superior” white race. As title holder, Johnson thus had to face a series of fighters billed by boxing promoters as “great white hopes.”

He did get to face Jeffries after all in on July 4th, 1910 in what is termed “the Fight of the Century”:

James J. Jeffries came out of retirement and said, “I am going into this fight for the sole purpose of proving that a white man is better than a Negro.” Jeffries had not fought in six years and had to lose around 100 pounds to try to get back to his championship fighting weight.

At the fight, which took place on July 4, 1910 in front of 22,000 people, at a ring built just for the occasion in downtown Reno, Nevada, the ringside band played, “All coons look alike to me”. The fight had become a hotbed of racial tension, and the promoters incited the all-white crowd to chant “kill the nigger”. Johnson, however, proved stronger and more nimble than Jeffries. In the 15th round, after Jeffries had been knocked down twice for the first time in his career, his people called it quits to prevent Johnson from knocking him out.

The “Fight of the Century” earned Johnson $225,000 and silenced the critics, who had belittled Johnson’s previous victory over Tommy Burns as “empty,” claiming that Burns was a false champion since Jeffries had retired undefeated.

So with all of this sports background to contextualize the “Galveston Giant’s” career, it is wild for me to see Jack Johnson in the video above conducting a Jazz band at a club in Harlem, New York in 1929. In fact, Johnson owned and operated his own club in Harlem for three years from 1920-1923 until he sold it to Owen “the Killer” Madden in 1923, and soon after it became the legendary Cotton Club).  He was also known for his involvement with white women throughout his public career, one of the greatest race taboos which was in many ways responsible for his arrest and imprisonment for “transporting women across state lines for immoral purposes.” It is always interesting for me to think about a figure like Johnson as the Heavyweight Champion of the World in 1915, the same year D.W. Griffith’s Birth of a Nation redefines film narrative, with the controversial theme being very much the horror of inter-racial sexual relationships.

So, to hear Johnson referring to his boxing career, as well as to watch him conduct and shadow box to the music is quite an experience, particualrly since this man embodies an era and so many of the most complex issues of the US throughout the 20th century and into the 21st.