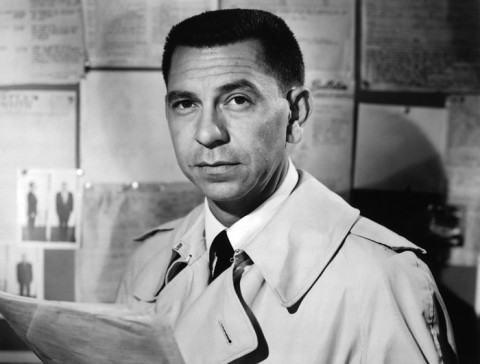 Jack Webb in character is Joe Friday on Dragnet

Last night we had a pretty awesome True Crime class. The conversation was deftly led by Sara Akbari, Meredith Fiero, and Jack Harris; they did an awesome job with their presentation, research, and framing othe readings for the class as their wiki article will attest. We talked about two related pieces. The first was Jack Webb’s telling of the “The Black Dahlia” murder from his book The Badge which is a collection of all the episodes of the classic 1950s Radio and TV series Dragnet that he pitched but could never air due to their graphic nature. The other was James Ellroy’s essay “My Mother’s Killer” about his lifelong obession with his mother’s violent murder when he was only ten years old. I wrote a bunch about Ellroy on this blog while reading and discussing his novel Black Dahlia as part of the Hardboiled Freshman Seminar Paul Bond and I taught last Fall.

I have to say it was eye-opening to read the “The Black Dahlia” piece by Webb that got Ellroy hooked on the horrific fate of Betty Short (he recieved the book as a gift on his 11th birthday from his dad) which somehow became his own fate. I had no idea what an amazing writer Webb was,  this short narrative is reminiscent of a hardboiled Hemingway at his best batting out terse, brutally apparent prose. The brevity of this account—something Ellroy couldn’t manage in his novel—coupled with a harrowing nod to emotions that can never  take root in the policemen overseeing the worst humanity has to offer makes this work unbelievably compelling. The following passage that describes the corpse of the Black Dahlia is an excellent, if not painful, example of just that:

It was nude. It showed evidence of slow, deliberate torture. There were neat, deep slashes around the breasts and on them. Rope burns on the wrists and ankles indicated the victim had been spread-eagled to heighten her agony. Her mouth had been deeply gashed from ear to ear so that her face was fixed in a grotesque and leering death smile. Finally, her bosy had been cleanly, surgically cut in two at the wasit.

Brown was glad to turn away to check with Lee Jones of the Crime Lab.

Not only is the description as powerfully horrific as anything I’ve read in Ellroy, but at the same time detective Brown’s horror remains necessarily understated, suggesting that even a verteran like him is “glad to turn away.” This is such a nice touch, and the simultaneously precise and ethereal quality of his recounting of Dahlia’s narrative is captivating. For example, take this description of detective Brown trying to recreate her last moment between being seen at the Biltmore Hotel and showing up in two pieces in an abandoned lot at 39th and Norton.

Once The Dahlia changes a dollar bill at the hotel cigar stand and amde a call, maybe two. The she waited, as though expecting a call back. When none came, she walked out the front door , smiling to the doorman as he tipped his cap. He observed her trim form swinging south on Olive Street toward Sixth, the slim legs stiding easily, the red heels tapping purposefully on the sidewalk.

And thus Detective Brown traced The Dahlia back to childhood, forward to the brink of eternity. And there the investigation stood still. Five days from the doorman’s last salute to the living, up to the discovery of the mutiliated thing, remained a blank.

For anyone who has read Ellroy’s Black Dahlia, which I’m a huge fan of, filling in the unknowns of these three paragraphs is exactly what Ellroy turns into 400+ page magnum opus of everything he’s done up and until that moment. He tries to fill in the blank, resolve the murder, and put order to an open-ended horror show posing as a suppressed Dragnet episode that Ellroy couldn’t escape. But unlike Ellroy, Webb keeps the case open, from as early as her childhood this short piece pushes you to the “brink of eternity” with Betty Short. At the same time it can neither let you fall or pull you back. More than a few students had a similar reaction to this piece, and for me I was blown away by how remarkably well-written, and precisely crafted it is as both a document of the case as well as a finely-framed piece of literture to capture the horror and effervescent beauty of a moment between knowing and uncertainty, life and death, a smile and the ghastly mutilation of the flesh. Webb’s piece may very well be the best thing we’ve read all semester, but with that said, it’s now time to turn to Truman Capote’s 1966 masterpiece In Cold Blood.

This entry was posted in True Crime and tagged Jack Webb, James Ellroy, The Black Dahlia, truecrime. Bookmark the permalink.