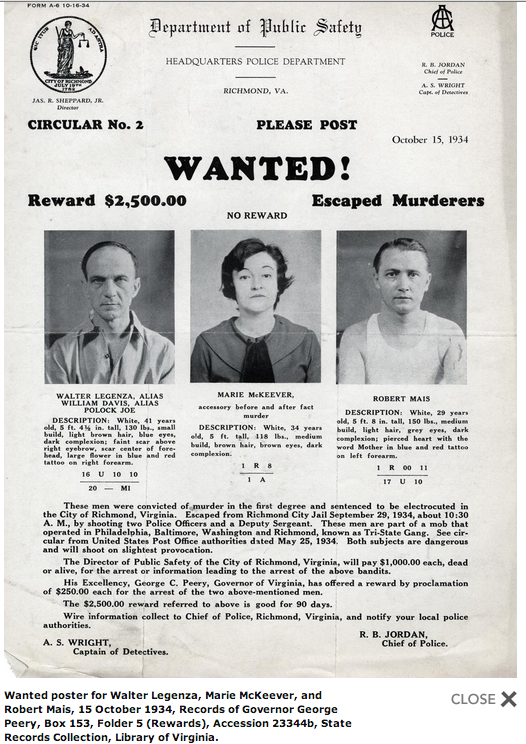 Last week in the most awesomest True Crime course ever taught anywhere we talked about H.L.Mencken’s 1934 article for The Baltimore Evening Sun “More and Better Psychopaths.” Mencken’s piece condemns the “New Penology” for being too soft on criminals, while chastising our culture’s romanticizing of gangsters. The following bit of Virginia criminal history is taken from Mencken’s article, which led me on a bit of a web journey.

Some time ago a professional criminal named Mais, wanted for various murders and robberies, went into hiding in Baltimore. The cops, getting his scent, tracked him down promptly, and took him into custody. He was heavily armed, and they risked their lives, but nevertheless they took him. Sent to Richmond to answer for a peculiarly brutal murder, he was convicted and sentenced to death. But in a few weeks he had broken out of jail, and on the way he had killed a policeman. Now he is at large again, and robbing and killing again, and other cops will have to risk death to take him again.

Dr. Mais’ escape was a monument to the sentimentality with which such swine are now treated. Though he was known to be an incorrigible criminal, and all his friends were known to be of the same sort, he was premitted to recieve visists from them in jail. Presently one of them slipped him a pistol, and the next day he was on his way, leaving one man dead and two wounded behind him. Suppose you were a cop, and you met this Mais tomorrow? Would you approach him politely and tap him on the shoulder, and invite him to return to the deathhouse? Or would you shoot him at sight, at the same time giving thanks to God that he didn’t see you first?

Given I’m comfortably nestled between Washington D.C. and Richmond in beautiful, historic downtown Fredericksburg, I started to wonder about this Robert Mais character. I did a quick Google search and discovered this post on the Virginia Memory site about the book “The Tri-State Gang in Richmond: Murder and Robbery in the Great Depression” which is a history of Mais and his two accomplices Marie McKeever and Walter Legenza (the triumvarite that made up the Tri-State Gang). What’s more, the post on the Virginia Memory site links to a series of primary documents at the Library of Virginia that the author Selden Richarson used in his book, including the wanted poster embedded above as well as a number of newspapaer articles that recount various circumstances surrounding the murdered guard Mencken refers to in his article. 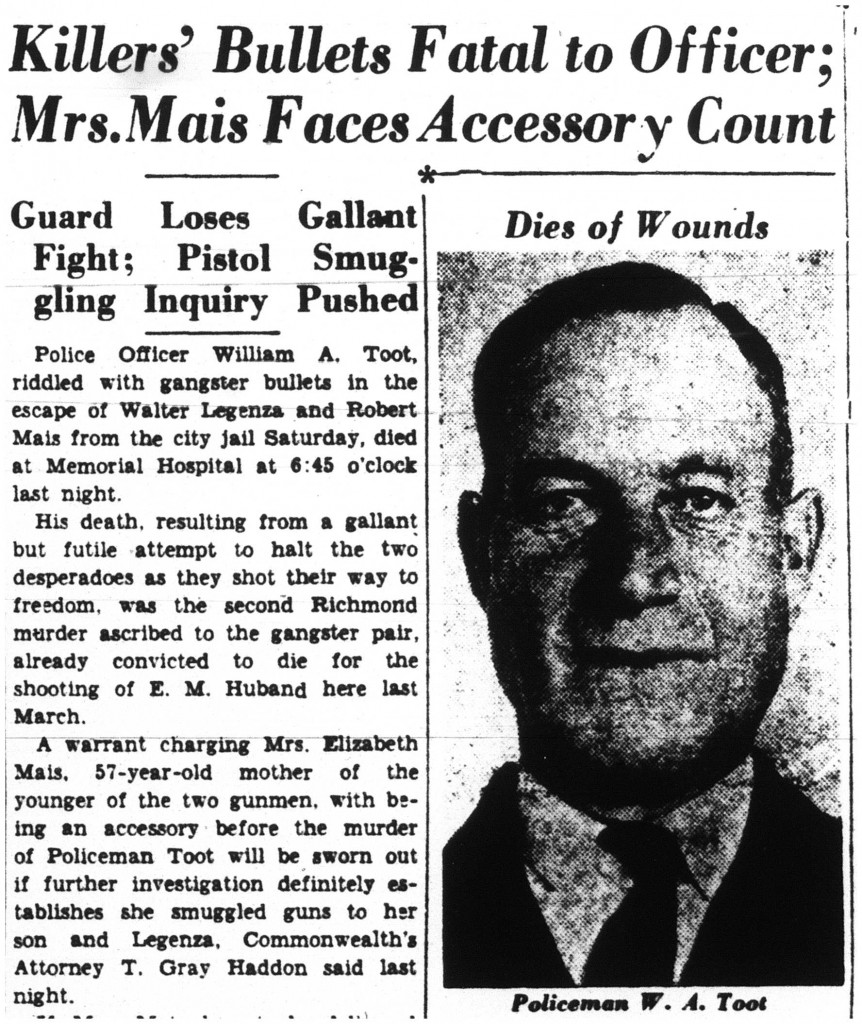 Or this scan from a Richmond newpspaer that had a picture of his funeral: 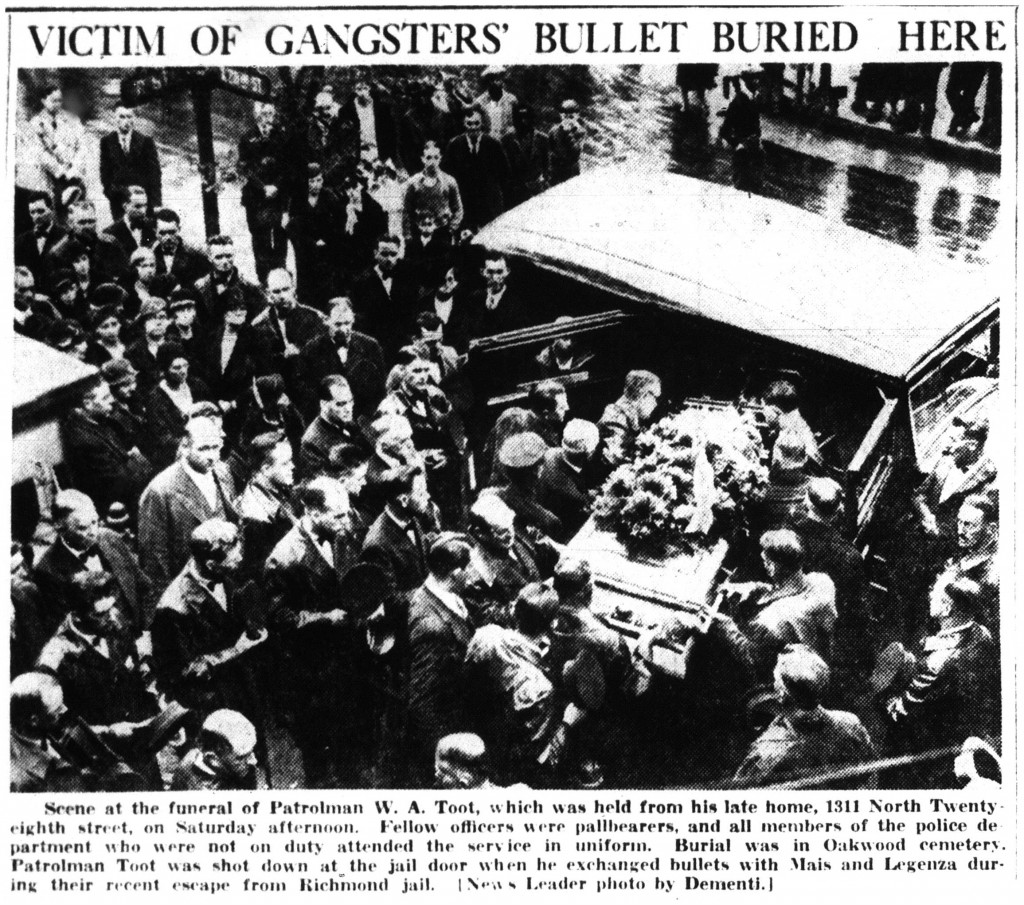 There is also a story about the jailkeeper on duty, Deputy Richard Duke, who commited suicide as a result of the jailbreak, presumably because he felt somehow responsible. 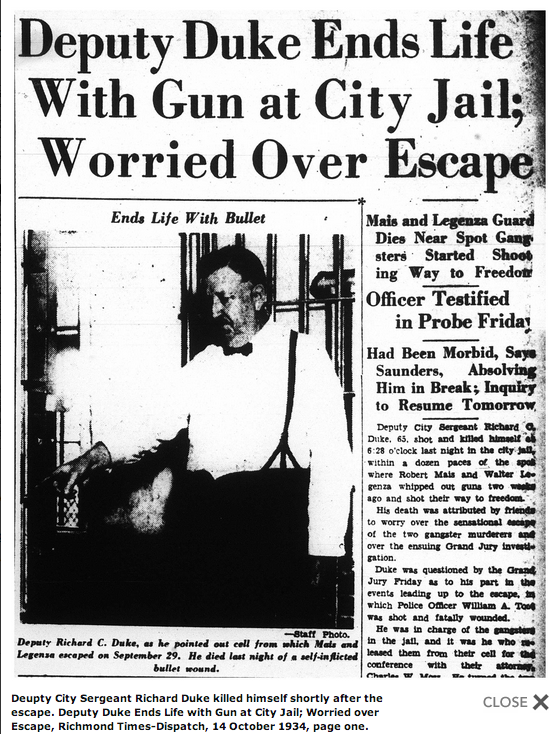 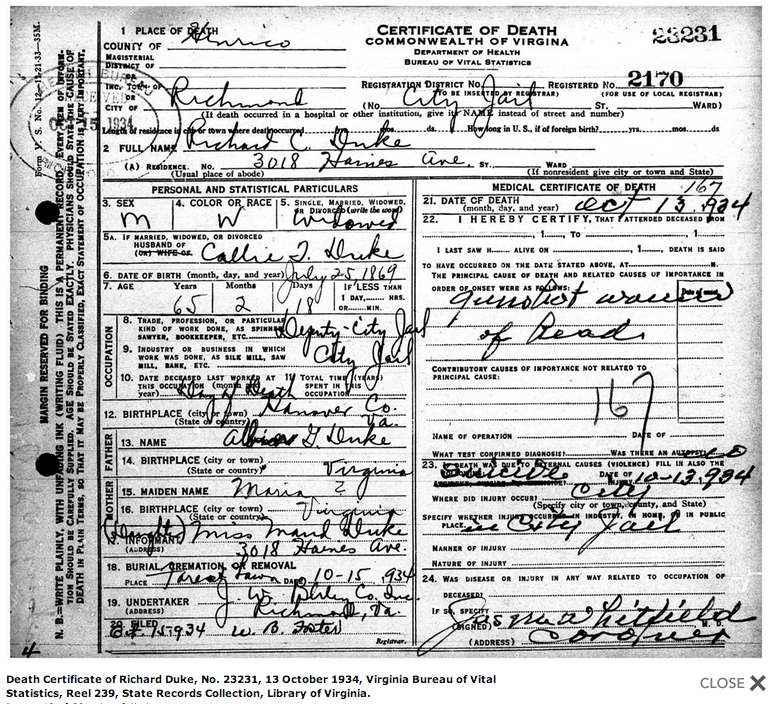 Or the death certificate of one of the members of the Tri-State Gang, Walter Legenza, who was ultimately caught and executed in Richmond (as was Robert Mais). 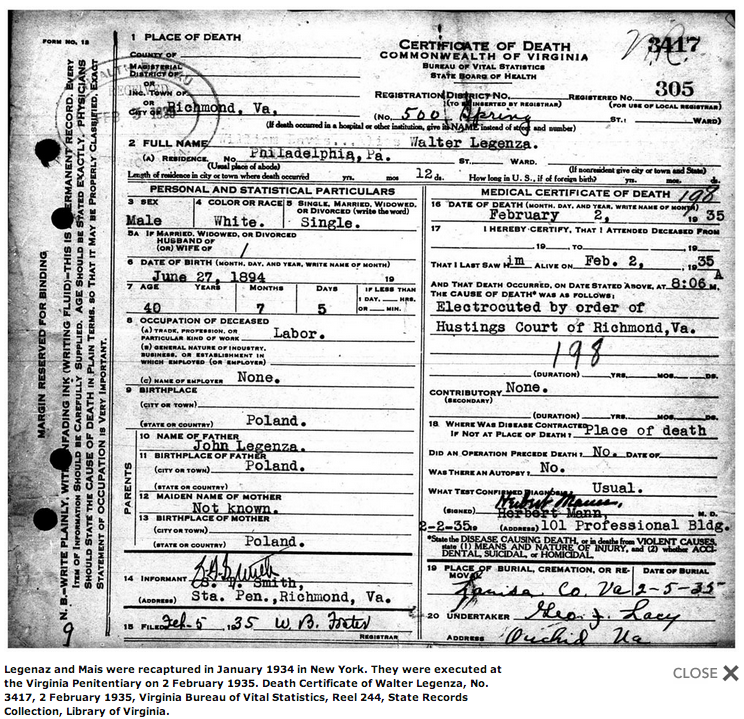 Have I ever mentioned how awesome the web is and what an amazing resource it is for teaching and learning on this blog before? I had some visions of taking the documentary images and articles and making an abbreviated version of this as a graphic novel á la Brian Michael Bendis’ Torso, which we also read and discussed last week, but that’s fodder for another post.

4 Responses to Wanted: the Tri-State Gang