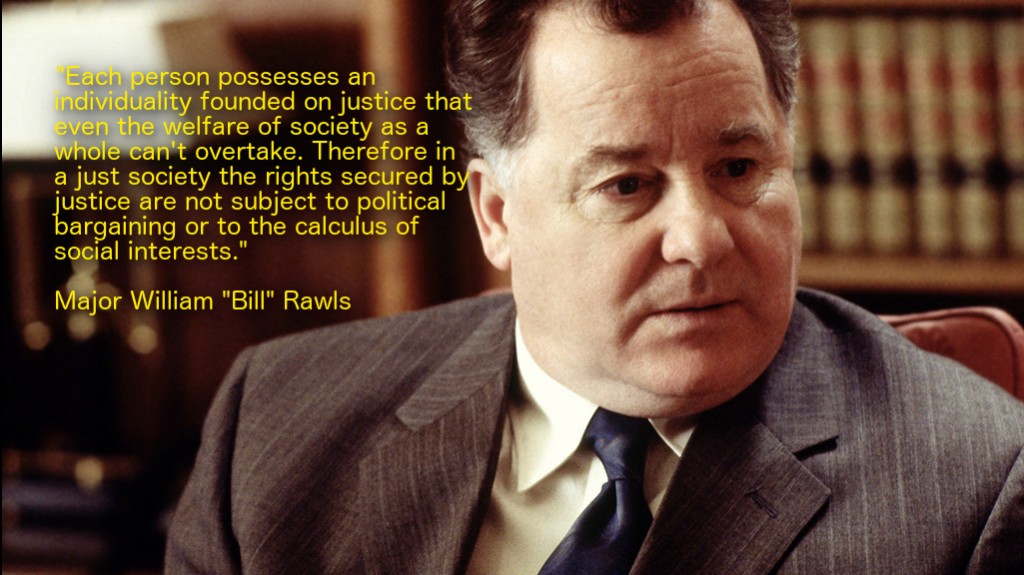 I wanted to start warming up with a nice “Troll Quotes”assignments, one of my all time favorites. This troll quote is actually inspired by the theory that the hard-ass character Major Bill Rawls in The Wire is ironically named after the political philosopher John Rawls. And after reading that John Rawls was from Baltimore, I was all but sure. That said, I was sure others have thought about the connection, and after a quick search on Google I confirmed that fact.

Like Simon, Rawls was interested in institutions, particularly institutions of justice. His writings also frequently address the issue of rights and liberties, a subject that often comes up in The Wire (the show is something of a crash course in all the regulations that prevent police from conducting surveillance without a warrant, or committing other civil-liberties violations). That is where the positive parallels end, however. Rawls the philosopher was an idealist, deeply committed to a vision of justice as impartiality. The Wire by contrast is the opposite of idealistic, and portrays a moral universe in which impartiality is a distant dream.

I was struck by the connection, and A.M Lamey frames it perfectly in the above quote. Rawls the philosopher suggests philosophy is above political bargaining or calculated interests, but the universe of The Wire stands in stark contrast to such a theory. Major Rawls being part and parcel of the alternative, so I was sure to source him for the other Rawls’ quote. As for the image, I figured the institutional representative of justice in this series, Judge Phelan, would complete the triumvirate of this troll quote nicely. While appearing austere and learned in his book lined office and three-piece suit, he’s the epitome of the institutional machinations that have usurped any vision of justice in the world of The Wire.

As for the process, I opened up the image in GIMP and added some yellow text so it would stand out. Given the background had varying colors, I used the Filters–>Light and Shadow–>Drop Shadow option to make sure people could read the text even when the background was light (you can adjust the value based on how much shadow you need). It’s a simple finishing touch that helps you avoid looking like a total amateur.

1 Response to Judge Rawls on Justice