Late to the Party: Migrating an outdated WPMu to WordPress Multisite

The migration process from WPMu (roughly version 2.9.2) to WordPress Multisite (version 3.4.1) has been well documented already. Two sources I found useful for a straightforward tutorial for doing the migration—which I imagine everyone who is anyone has already done except for me—are here and here.

I recognize this post is probably two years too late, but I’ve recently been working on resurrecting a WPMu site that was offline for a year and a half. In the effort to get it back online I had to update it to the most recent version of Multisite which came with a few issues. I’m gonna outline those issues and how I fixed them in hopes it helps anyone else who stumbles upon this post in need of some advice.

Once I updated the old WPMu files to the latest version of WordPress the public facing site was blank because the theme was 5 years old, but I could login to the Dashboard area—which was amazing to me. What I saw once I logged into the Dashboard was the following: 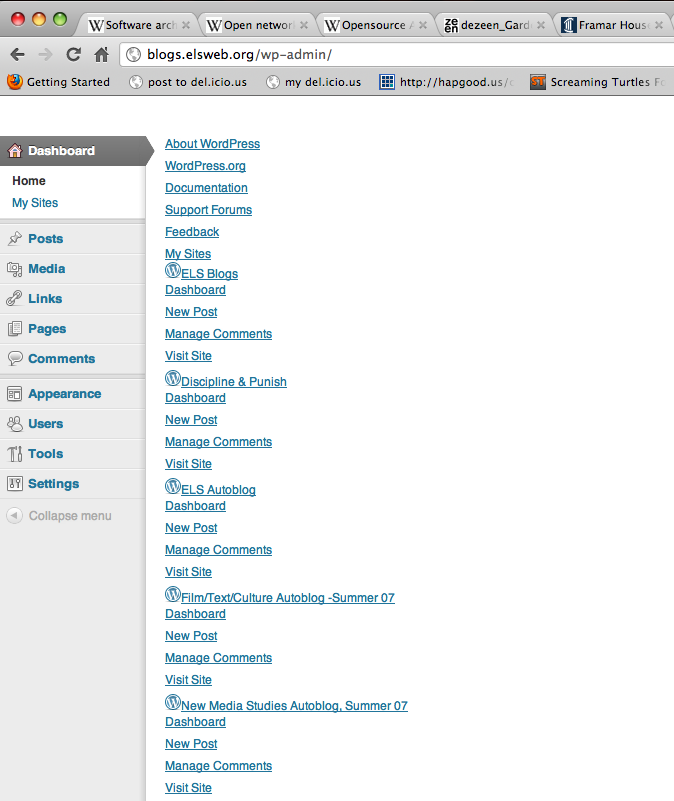 I fixed the theme issue by making the default theme in the wp-config file TwentyTen:

But I couldn’t figure out why the Network Admin was missing, I had put the

in wp-config, but still no go. I got on Twitter and asked around—which I think might come across badly when I impose on the proximity of the genius of @andrea_r, I do apologize—and was pointed to the fact that there’s an issue with this install not recognizing the admin as the Network admin for the multisite. Which, in turn, would explain why I couldn’t access plugins, themes, or the admin menu: It’s elementary, Watson! I’ve been out of the hacking game for far too long, I am getting soft. This was confirmed when I went to siteurl.com/wp-admin/network and got the following error:

You do not have sufficient permissions to access this page.

Anyway, a post on the forum by Andrea about this issue () led me to the solution. She recommended the person having the issue look in the wp_sitemeta for the site_admins table. Her recommendations was along some other thread, but what I noticed were these crazy slashes cutting up the fields (as Boone suggested, it was like a bad slasher film 😉 ).

When I removed the errant slashes…

…my issues were solved. I actually had to clean up slashes that were in the Allowed Themes table as well as a few others. I have to believe that this issue is a hold over from a database issue I had on ELS Blogs when WPMu 1.2.5a to WPMu 1.3 converted text-encoding from latin to UTF-8. I had all kinds of issues with ELS Blogs in this regard, I blogged them here, and I believe this issue is probably going to be extra rare given how old school and particular this issue is—but what can you do? Old habits die hard.