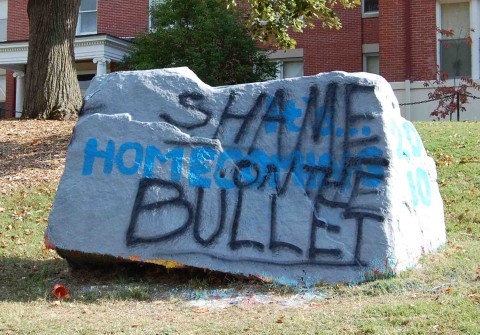 We’ve been having some growing pains on UMW Blogs recently, namely it’s been getting more and more popular. So much so, that I think it’s fair to say we’ve seen it grow well beyond our capacity, and I have to admit part of that is my fault. I’ve encouraged UMW’s The Bullet (the student newspaper), EagleEye (the faculty newsletter), and several other high traffic sites to come on board over the past year or so. And given the use has only grown for just about every department, administrative office, and Tom, Dick, and Harry across campus, it’s no wonder I’m kinda sitting here saying how about that, we did it! (That one’s for you, Dora.) It’s a good feeling, but at the same time it is also time to admit the system is bigger than what DTLT can do, and we have to adjust accordingly, and I’m sure we will very, very soon.

In the meantime, what’s been interesting though is that we’ve had more downtime than usual over the last few days (which coincided with me being sick as a dog with bronchitis–suck it!) because reporter Linley Estes of UMW’s student paper The Bullet published an article about 15 UMW students who were busted in connection with drug dealing, which subsequently has become quite possibly the most popular article on UMW Blogs ever. With more than 6000 views and over a 140+ comments in three days for that article alone, it’s become both the highest profile and most polarizing issue on campus this semester yet (though I would much rather have students become even a fraction as rabid about the looming 25% tuition hikes). The article used the full names of the accused students, as well as their hometowns and a few of their mug shots. All of which led to a heated battle in the comments on the article made up of  basically two camps: those who don’t think the student paper should have published names and images of the accused students, and others who believe it is part of the fifth estate’s responsibility.

What’s more, a number of articles in today’s Bullet follow up on the story, everything from a staff editorial on the Bullet’s coverage to an editorial on the distasteful way the paper dealt with the “drug story” (as it is now being referred to). What was most alarming though, was this news article about the harassment of Linley Estes, who was the author of the article that led to all the controversy in the first place. The harassment was directly linked to the article, and came in the following form:

Following her recent Bullet article about on-campus drug arrests, junior Lindley Estes has been harassed via e-mail and Facebook, but the message that scared her the most was the note taped Monday afternoon to her off-campus apartment door.

Estes alerted the Fredericksburg Police Department, who conducted the drug arrests and investigations.

“The scary thing wasn’t the note, but that they knew where I lived,” Estes said.

It’s a crazy moment here at UMW, but not so much because of the drug bust. Rather, it’s the battle over the availability of information, and the impact this has upon all of us. Linley Estes is a reporter, she reported what happened at UMW, and now it seems she needs to be protected from those folks who would have us believe that the university is a low stakes playground for middle class kids. This is where we live, this is what we do, and while I’m personally more of a legalize drugs and get this bull shit over with type of guy, threatening a reporter for doing her job is insane. And it is a reflection of just how deeply screwed up our culture is when it comes to the idea of  controlling information, and protecting those in power.

No one threatened Anne Elder after she reported on the suspect who ripped off a purse in broad daylight from a UMW student’s parent during Parents’ Weekend (what a PR nightmare for UMW—it really can’t catch a break). And why? Well, because it wasn’t a student who did it, it was a 30-something black male, and you know the rest of that story in the media don’t you? You’ve certainly heard it enough. No one was crying for clemency for the accused in that article, and no one seemed to care that they didn’t protect his identity and hometown. No one in the UMW community cared about him one lick. Now, in this particular story there is a push for clemency for the accused—a push to save the students from some of the public embarrassment and guilt by publication. And I have to say I am all for clemency for the accused in relationship to drug charges—in fact I am for clemency more generally (what I mean by clemency here is not necessarily pardon, though that would be good, but rather disposition to be merciful), for I think US culture is far too martial to begin with, and when it comes to drugs it’s insane. What I would really like to see is that we as a community at UMW make an attempt to distribute that sense of mercy and “the benefit of the doubt” mentality more equally and also that we refrain from trying to kill the messenger, in this case Linley Estes. What a mess!

This entry was posted in Uncategorized and tagged umw bullet. Bookmark the permalink.