Last month Lauren and I travelled to Skidmore College to run our first Reclaim Roadshow. I thought it was a great success, and Lauren has already blogged her reflections on the two-day workshop/user-group. I agree with her entirely that it was invigorating to get on the road and talk at length with both current and prospective Domainers about the limits and possibilities of this platform. I’ll try and follow-up on Lauren’s post about the workshop after I finally blog about our post-workshop conversation with Katie Martell (which Lauren also already blogged!), so essentially go read Lauren’s blog for any relevant news and let me write about getting my ass kicked on Mt. Marcy 🙂

But it was gorgeous, but let me backtrack here. When Ben Harwood, Lauren and I were planning the Reclaim Roadshow I was interested in returning to a childhood haunt, namely Lake George. As a teenager I spent a number of very memorable summers inidyllic Bolton Landing thanks to my good friend and his father’s enormous hospitality. Lake George is amazing and given Skidmore College is just twenty miles south I was hoping to spend a day hiking around the lake, particularly given late Fall is a part of the year that I had never seen that area. So, as a bonus to the Roadshow was the possibility of a hike, which given my attempts to survive in Trentino the last few years seemed very inline with the new and improved bionic bava. 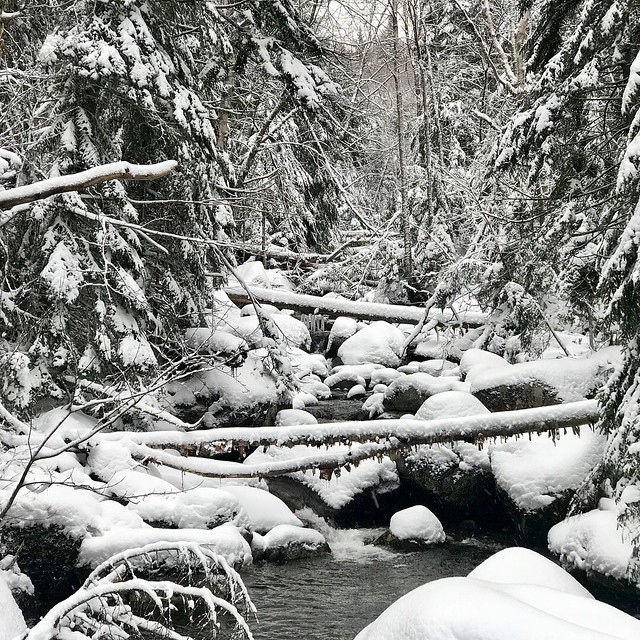 So, after the workshop Ben suggested we try the highest peak in New York State, namely Mt. Marcy, which is actually two hours north of Saratoga Springs near Lake Placid—home of the 1980 Winter Olympics! When I looked at the altitude of 5,343 feet (1,629 m) I was like “Not a problem.” Hiking altitudes of 2000 to 2500 meters has become a fairly regular occurrence these days, and I was confident that the hike would not be an issue. So, Ben (who is old gold ds106 and has been in the edtech game for a long time) recommended it I was like absolutely, let’s do it. But when he soon after suggested we leave at 4 in the morning I was kinda dismissive. “Why? Do we really need to leave that early for a modest day hike?” Turns out that was my pride fucking with me. The hike to Mt. Marcy from our point of departure (the Adirondack Loj) was over a 7 mile hike one way. “OK, so it is a bit longer distance than the hikes I usually do—but still, 4 AM?” That was my pride fucking with me again. We did get up at 4 AM, and we arrived at the Loj (the unfortunate spelling was a victim of Melvil Dewey, founder of the Lake Placid Club and ardent advocate of spelling reform) at 6 AM and I appreciated the early start cause that would mean we could finish the hike early and spend the afternoon checking out the Olympic Village in Lake Placid. What did I say about pride again? 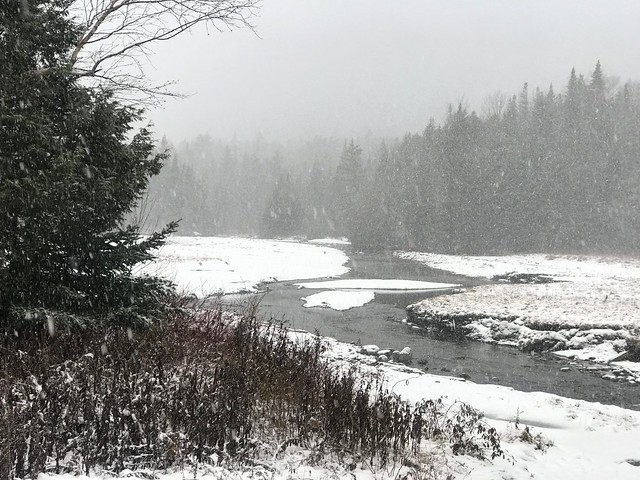 So we started our hike in the dark, and did I mention it was snowing? It had started snowing the evening before, and while in Saratoga Springs it was turning to rain, two hours north it was solid snow. We were chasing the snow plows up to Lake Placid, and by the time we got to Mt. Marcy there was at least 6-8 inches on the ground with the heavy stuff just getting underway.

It made for a beautiful and peaceful hike. I was feeling good at the start. Ben and I had a hearty egg sandwich at a nearby Stewart’s, not to mention we came prepared with food, snacks, and refreshments of all kinds. The first hour or so was solid, I was moving at a decent clip, and while the path was a bit more rough than I’m used to I was feeling good. But then we started to climb, and the path was not what I am used to…. 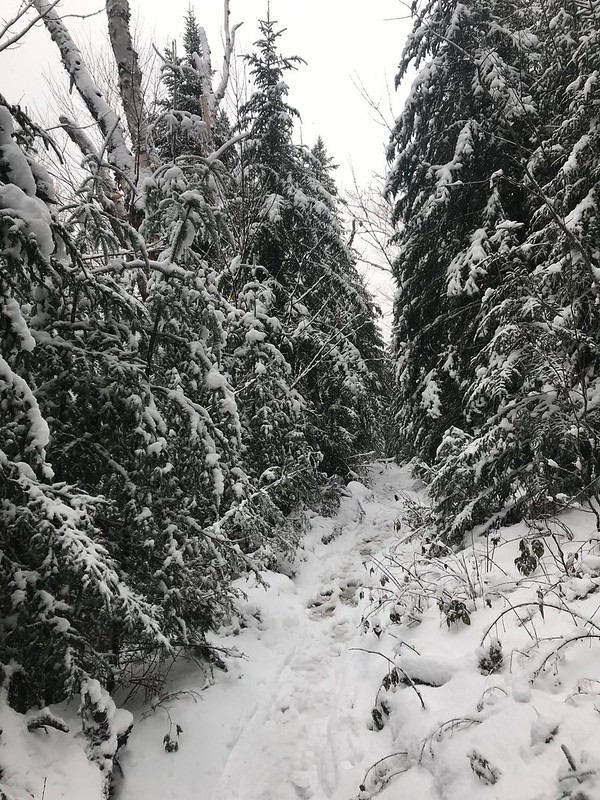 Literally there was no discernible path, and the rocks, streams, and snow were starting to wreak havoc on my flow. Ben, however, was unphased—and I was like hmmm. And then, the others came, and that’s when I knew I was not as good a hiker as Italy has led me to believe. Let me explain something here quickly, the Italian alps have spoiled me. The paths are wide, well-marked and meticulously manicured. What’s more, even the most banal surroundings in the Alps are postcard quality, and often times hikes lead to world class restaurants. That was not the case here, the views were all of trees and streams (although quite pristine and gorgeous woods to be fair) and the trails more akin to an obstacle course; I found myself jumping over streams onto rocks and more than once found my boot in 8 inches of cold mud. I was getting exhausted by the hike in the second hour, and then, as I already mentioned, the others came. People in their 50s and 60s dressed in lycra jumpsuits and booties flew by me like weightless ghosts out for a stroll. It was as if I was standing still. My pride got an overdue reality check; I was in for a serious hike. While the altitude was nothing, the trail and the distance was everything, and each step was earned. While the amazing vistas in Trentino are doled out like universal basic income payments, in typical American fashion you work really hard for very little in the way of a payoff. A couple of times on the way up the trees broke a little to show off other peaks, but not often enough to be noteworthy. 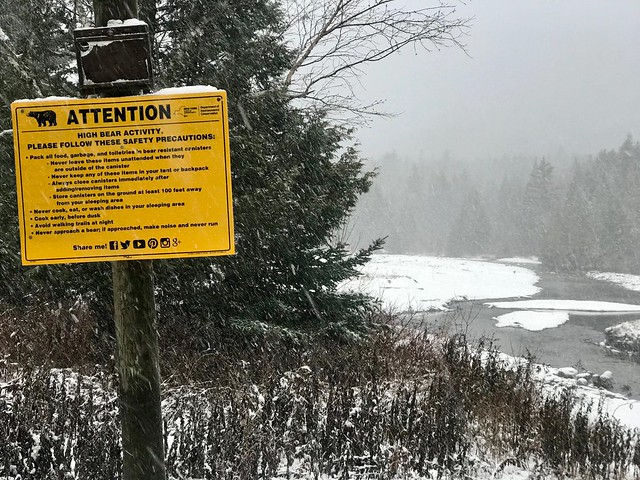 That said, maybe this hike seems so special to me because I did have to work so hard for what by other standards seems so little. The landscape seemed very 17th or 18th century America to me, if that makes any sense. I felt a sense of an expansive, wild, and beautiful setting that seemed to come from before our time, it was almost other worldly—and very different from the sense of the conquered paths of the Italian Alps. But maybe all that was my exhaustion (rather than my pride) fucking with me by that point. Seven hours later, and almost 7 miles of ascending and we finally arrived at 1 PM to an area we learned was called Mini Mt Marcy. We were getting up to where the tree line was ending, and the wind and snow were picking up. The last 1000 feet were going to be well-earned. In fact, with 3 or 4 hours of daylight left it was quickly becoming clear we were not going to make it to the summit. We were close, but there would be no cigar. And by this time my pride was all but gone, and I was now thinking survival given it was starting to get colder. 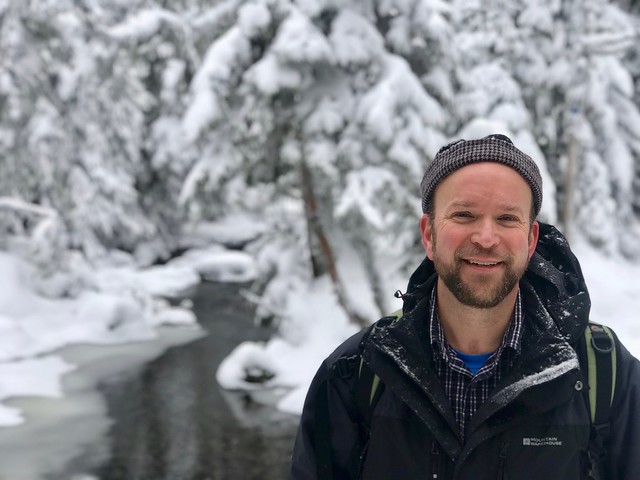 So Ben and I went on a bit further and then decided to turn back and make it down the mountain before nightfall. I appreciate that Ben held back a bit for me because it was apparent he could have gone much further much faster, but it seemed like he was in his happy place regardless, so I don’t think he minded too much. 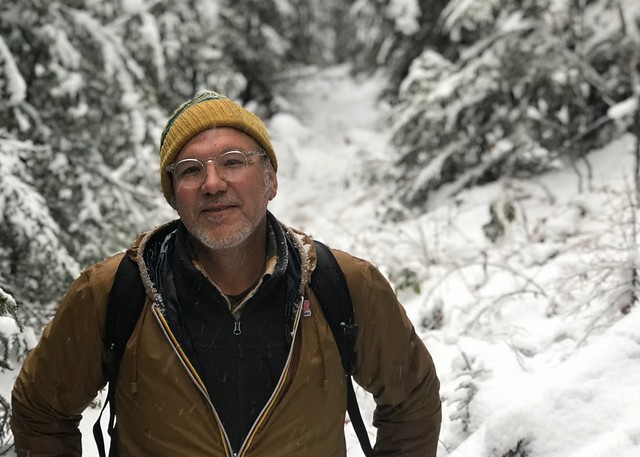 On the other hand I was worried about the way down given that is often when you’re tired that you get careless and shit goes wrong. But the way down was pretty smooth, much easier than the climb up, and we got back right around 5 when the day was spent. On the way down we were passed by a few folks who had ascended the summit, and Ben asked what time they started, the answer was crazy….3 AM! I think we could have made it to the top if we started the hike at 3 AM, but not sure I would do that knowing as much. The gentleman also noted he tried summiting last weekend but could not given the ice, so he returned to finish what he started and I thought that was pretty cool. He did mention he could have used snow shoes given he was making the trail in waist high snow, which is when I was thrilled we didn’t try and go any higher given my dungarees had already become a patchwork of dirt and fairly large ice balls that added at least 5 pounds to my load. 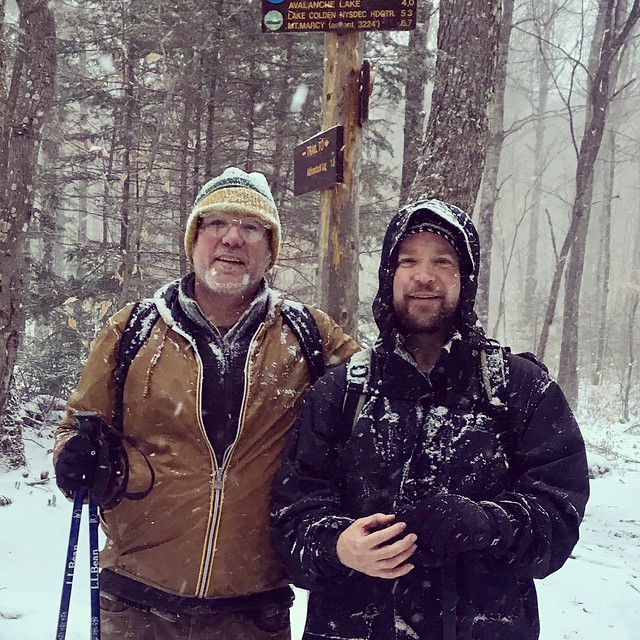 But we made it back safe and sound, and the two bowls of chicken soup I ate for dinner never tasted so good. In fact, hiking almost 15 miles in a day and being pushed quite hard for hours at a time made this probably the most memorable hike to date. I’ve seen a lot of beautiful things in Italy, but being pushed like this is a different thing all together—and you start to really go inside yourself mentally which is something I enjoy a lot. It was a flashback to my brief time as a long distance runner back in the early 90s. It’s kinda rewarding to think I’m scratching my way back into something resembling physical shape, and also sobering to realize there is so much more work to do. But more than anything, it was a very cool adventure into the Adirondack wilderness, and while I appreciate the stunning beauty of Italy, this trip rekindled a similar joy I experienced as a wayward teenager hiking the Adirondacks around Lake George during those long high school summer vacations. I guess the ultimate trip in all this is time, and how it’s both circular when it comes to memory and experience and linear when it comes to my aging ass.