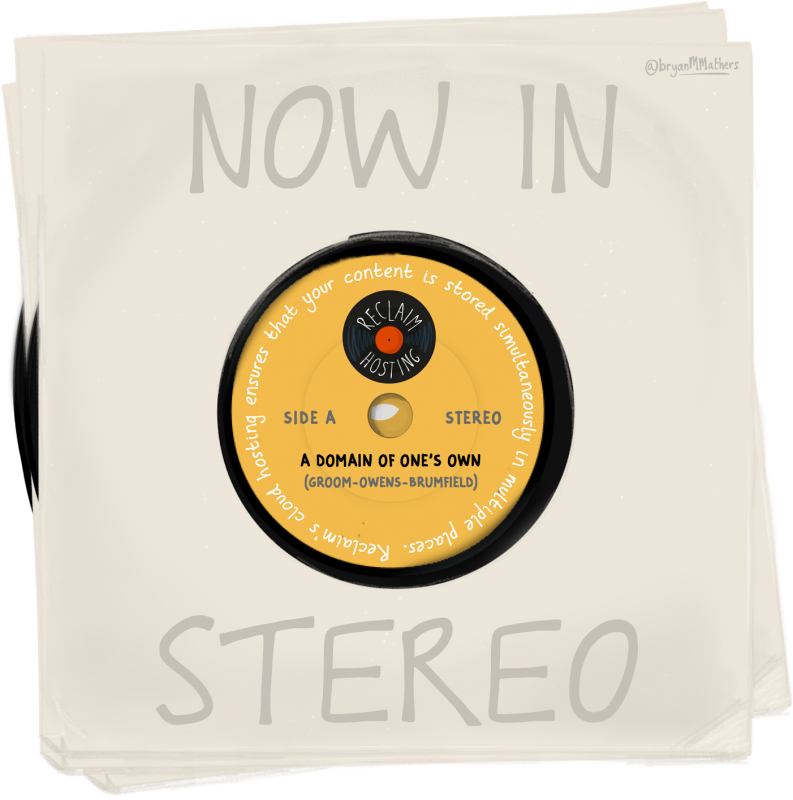 Bryan Mathers sent me another gorgeous addition to the Reclaim Hosting Record Store aesthetic. The “Now In Stereo” refers to the fact that we have 30 days of file-level, off-site backups that come stock with our shared hosting. In fact, we have started to push this out as stock for our Domain of One’s Own packages as well. Stereo being double the awesome—get it? We knew that ya could. But as is often the case with Bryan’s work, this goes beyond any one feature of Reclaim Hosting, it speaks to a broader aesthetic. This one filled me with nostalgia for the clean, off-white record sleeves, and the sense of depth achieved with the albums sticking out provided a patina of materiality. I am digging the range of effects. In fact, I’ve pretty much loved everything Bryan has created for us. 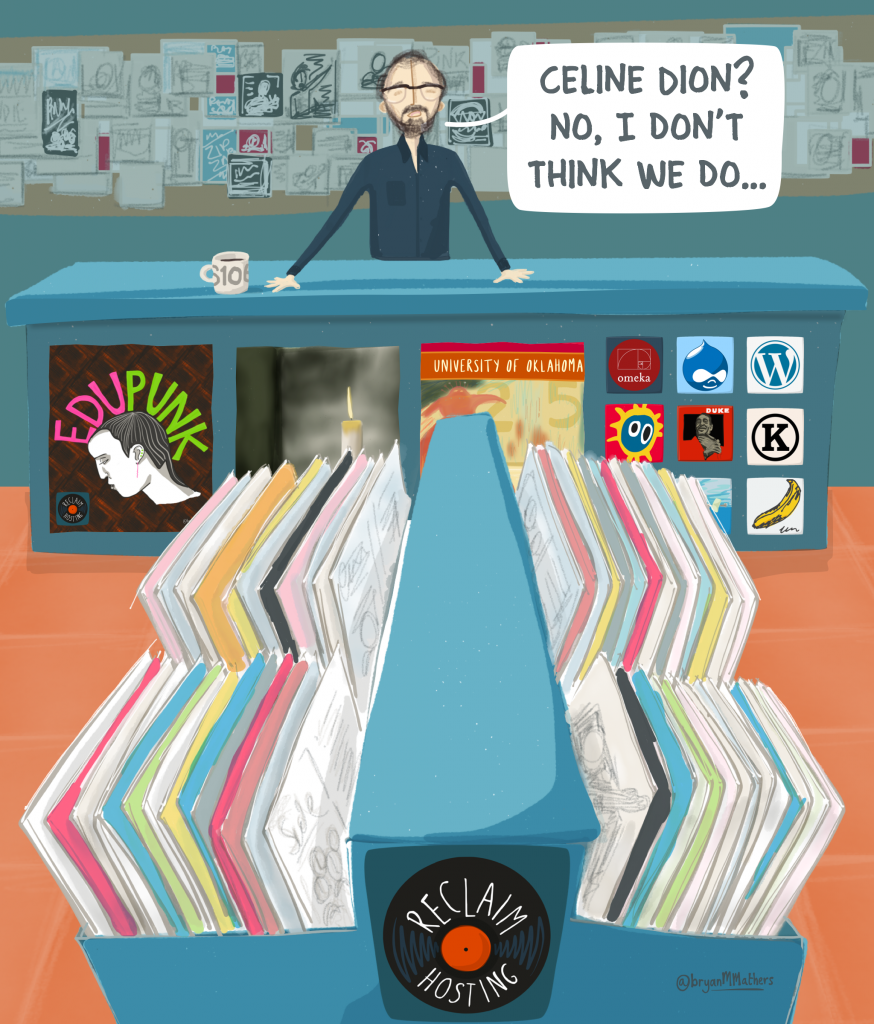 Last Friday Bryan and I spent 30 or 40 minutes chatting about stuff. I don’t exactly know what we want, I just have a vague sense of things I think are cool. One things I have been digging on recently is the 1990s poster art for the LA coffe house/indie scene mecca Jabberjaw. I picked up a book featuring a pictorial history of some of the bands and poster art that helped define the post-punk indie scene.What struck me was how coupled the poster art was with the music, and what I have loved about Bryan’s work is his use of colors. The EDUPUNK image is amazing example of that. 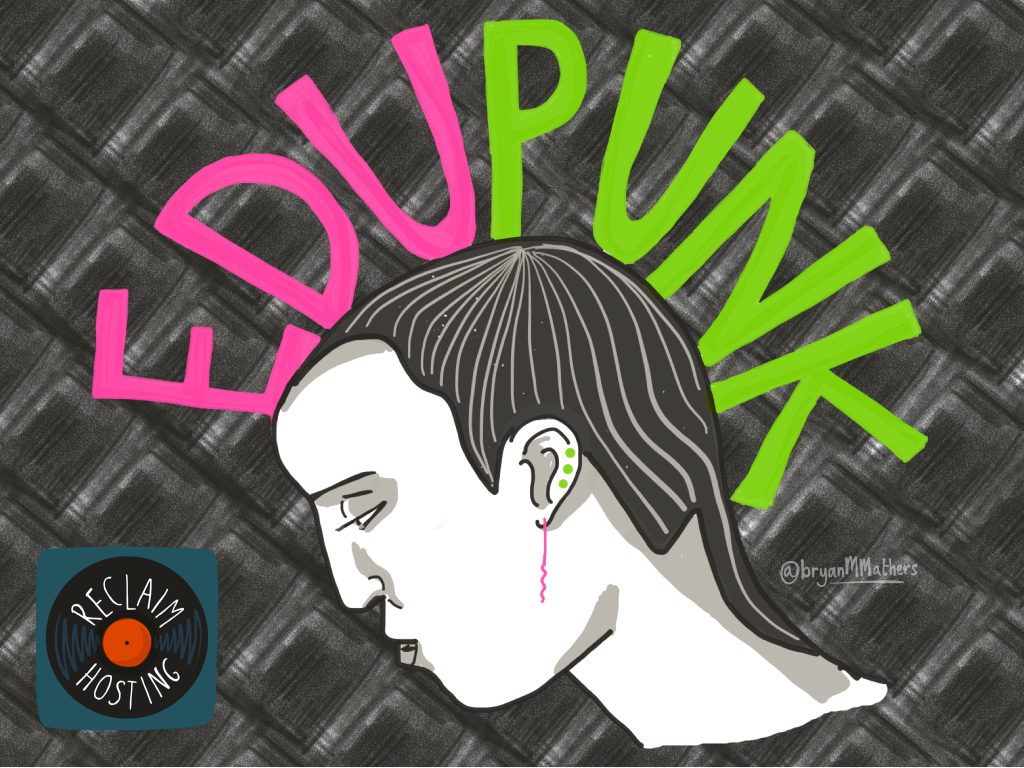 While there was a fair amount of Xeroxed black and white  fliers with dead simple designs, the posters where a kaleidoscope of color. In fact, the call gave me the opportunity to unpack the Jabberjaw poster that came with the book, which was also the cover for one of the record compilations produced by the venue. 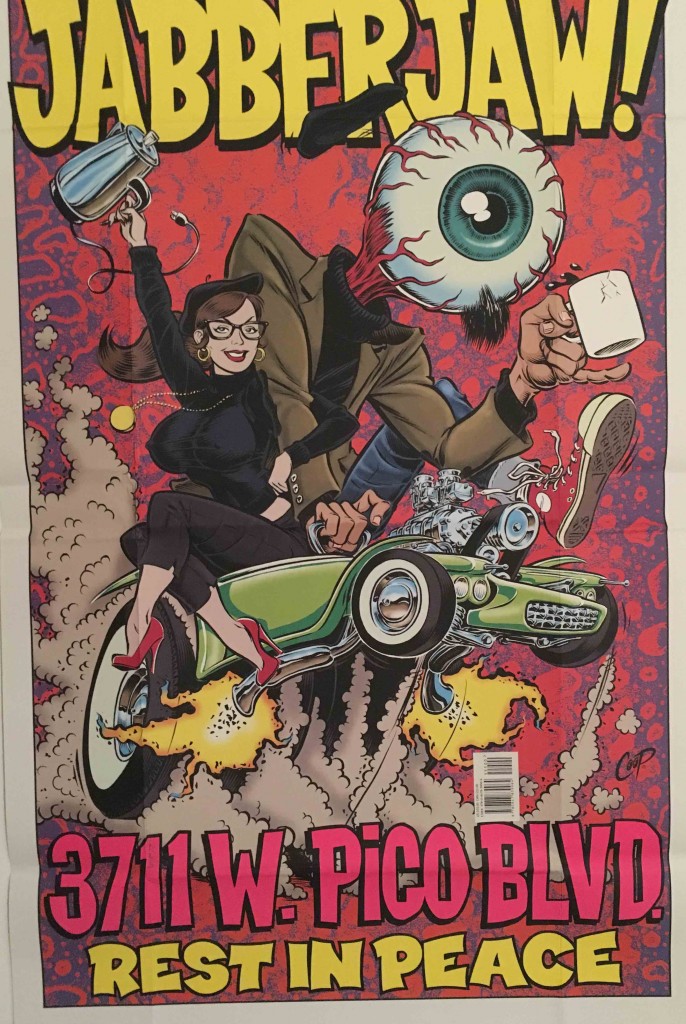 One of the things that we discussed is the way in which the various clubs and venues would be tattooed with stickers, fliers, posters, etc. The walls would become a textual and visual history of all that came before it. In fact, a retrospective of the Riot Grrrl movement called Alien She collected a large swath of the posters and fliers from 1991 onward. 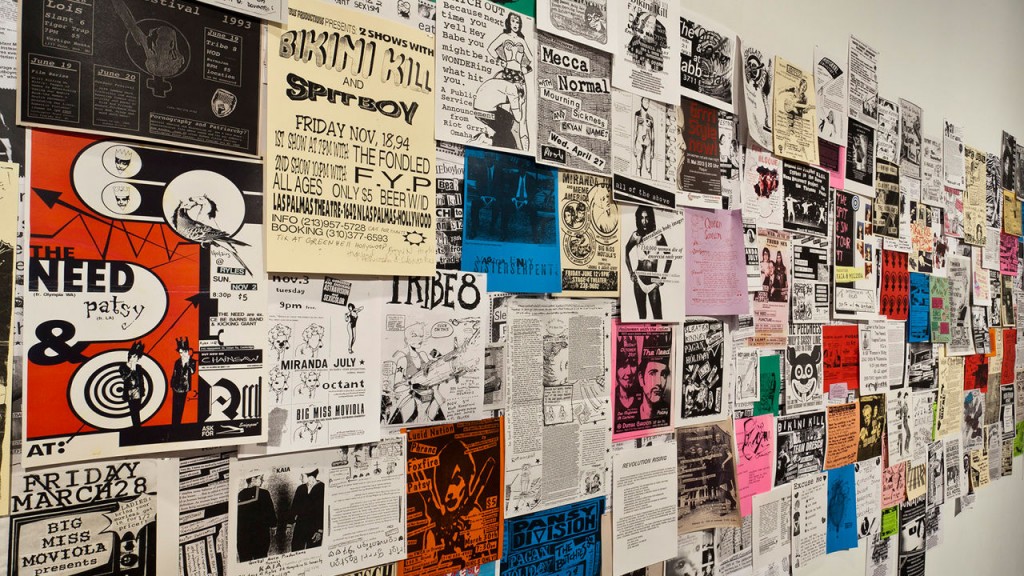 And while this vision of the posters and fliers is a bit defanged by the museum setting, the walls of CBGBs provide a better sense of how this might look like in the wild: 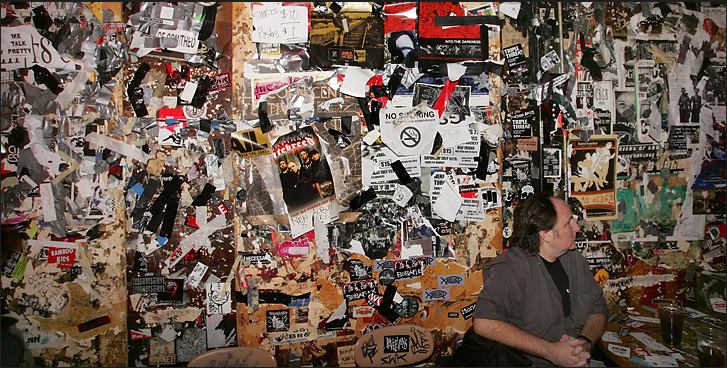 What were the walls of CBGBs

Our discussion led us to how record stores feature stuff. One way is simply by what’s playing. If you would walk into a record store you would immediately tun into what music they are listening too. Same in the old time video stores, they would often have a movie playing that you would key into, I know I did. The other thing is what’s lined up around and behind the counter, a featuring of sorts. A recommendation rack? Or there could also be a catalog, etc. Which started me thinking about the site Adam Croom created recently to feature his vinyl collection.  He tapped into the data on Discogs to populate his own site.

So what if we did something similar for our Reclaim Hosting recommendation rack. We pulled from the IndieEdtech blogosphere highlighting various projects both inside and outside institutions to share the work happening. In fact, you don’t need an algorithm or API for this, just the focus and attention the keep up with what’s happening. One way at that might be focused aggregation—which makes me think how we might put the IndieEdTech RSS aggregator to use, and eventually start duct taping together an aggregation hub at an indieedtech.tld site. This would be something Reclaim Hosting could use to follow and feature work we are excited about, as well as push out our own news and announcements to—as could anyone else so inclined to do so. What is that aggregation site looked like poster/flier filled wall? {MIND BLOWN} 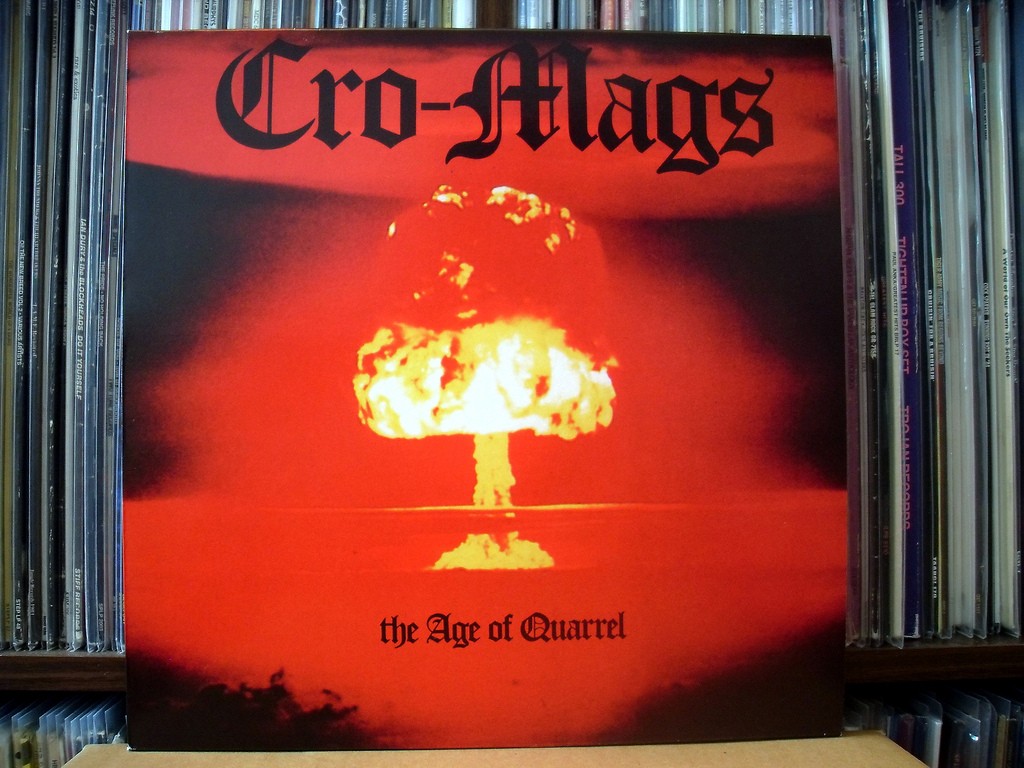 This entry was posted in reclaim and tagged Bryan Mathers, reclaim. Bookmark the permalink.

2 Responses to Now in Stereo