On Next Generation Digital Learning Environments

Two weeks ago Tom Woodward and I went to Karlstad University in Sweden to help run a two-day workshop. It was a lot of fun, and I have a ton to share about the experience. In fact, so much that I’m afraid any one post trying to encapsulate our time in Sweden could balloon into a novella, therefore I am going to break it into a few pieces. I’ll start with the presentation I gave after the two-day workshop, and then work my way backward and discuss the workshop on Monday and Tuesday in the following post. Finally, I’ll finish with a post on the socialist utopia of Sweden. There it is, I have committed to no less than 3 posts, now to make it so.

This presentation was titled “Next Generation Digital Learning Environments” (NGDLE) inspired by the 2015 ELI white paper on the topic, which is a concept, idea, technology(?) that seems to have made NMC’s 2017 Higher Education Horizon Report* under the name of the Next-Generation LMS. I have a number of issues with classifying Domain of One’s Own as a next-gen LMS, not least of which is it continues to prioritize the necessity of the LMS. In fact, the recent arrival of this concept on the Horizon Report may very well be its kiss of death given Audrey Watters recent takedown that brings its whole reason for the Horizon Report’s being into question.† That said, I have pretty much been promoting one idea for the last 12 years: make the web the learning platform. And with this approach, or so we hoped, there would be a move away from the monolithic, templated systems for teaching and learning to the small pieces loosely joined philosophy. I spent much of 2007 and 2008 slamming the LMS, but that gets tired—not to mention it’s had little to no impact.

So, this talk in many ways was a recalibration for me. I recently blogged after my NEXA Center talk in Torino that I wanted to change things up a bit with my presentation. I wanted to start with a focus on explaining the concept behind Domain of One’s Own with the venerable Richard Scarry house metaphor, demo how DoOO works using State U, then explore why whatever comes next needs to be much more than just a next generation LMS or Digital Learning Environment, but a complete re-positioning of the way in which we think about people managing and sharing their online world (not to mention an overhauling of DNS as we know it). Although still a work-in-progress, I was able to keep ds106 to a passing mention, which in and of itself is a victory. And while I re-used several slides and media  from previous presentations (I can’t get enough of the 2006 ACLU Pizza video),  the talk felt fairly fresh and spontaneous—which is always a good sign. It will be the basis of a further, more fundamental redesign of the talk that I’ll give this May at THETA 2017 in New Zealand.

I used this quote from the ELI paper on the NGDLE as a point of departure:

Higher education is moving away from its traditional emphasis on the instructor, however, replacing it with a focus on learning and the learner. Higher education is also moving away from a standard form factor for the course, experimenting with a variety of course models. These developments pose a dilemma for any LMS whose design is still informed by instructor-centric, one-size-fits-all assumptions about teaching and learning. They also account for the love/hate relationship many in higher education have with the LMS. The LMS is both “it” and “not it”—useful in some ways but falling short in others.

The fact of whether higher ed is truly moving away from traditional course structures is arguable, although I understand the propensity for wishful thinking in ed-tech. That said, the reframing of how we imagine personal data and the work we do inside and outside of a particular course does become an interesting moment for re-positioning the faculty or the student as a node within a broader network through which they share with one another. The primary obstacle there being integration between personal spaces and an institution, corporation, government agency, etc. Jon Udell has framed this issue as a lack coherence of the various small pieces versus the ostensible integration of the all-in-one systematic solution that often leaves out and sense of the personal. The NGDLE points to this at various points, but the push for fore-grounding performance-based personalization based on analytics obscures the most important facet of such an user-centered architecture: giving faculty and students more control over their data. An architecture premised on user controlled data shared through API integrations and system federation (ideally built upon open standards) would, indeed, be a new digital learning environment. But what the ELI white paper misses is that this system needs to be approached from a new perspective that humanizes the exchange of data and makes those negotiations everywhere apparent and transparent—that’s not going to happen through a federation of corporate software companies that are mining your personal data for their own profit—and if that’s the case why can’t you say no? —or even decide the terms and get a piece of the action? 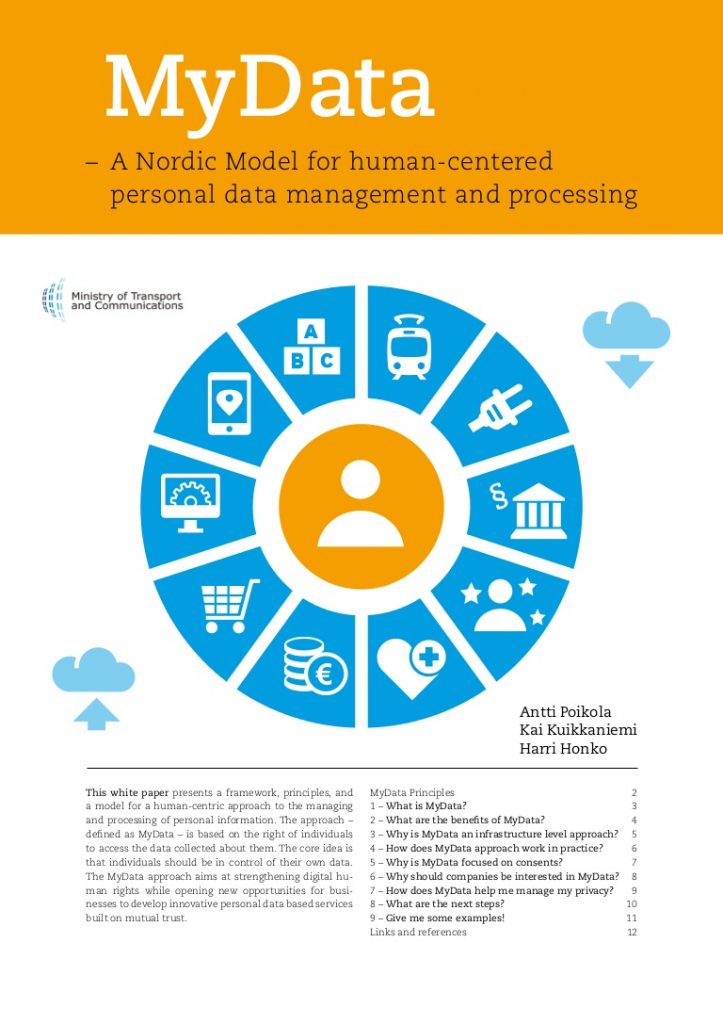 So, it made sense to mash up the architectural vision of the NGDLE with a more explicit and forward thing model for imagining how we could re-think data management at the level of the human when it comes to digital environments. This is where another white paper that came out about the same time as ELI’s NGDLE paper came in handy, namely “MyData: A Nordic Model for human-centered personal data management and proccessing,” This paper was authored by by Finnish researchers that are proffering an approach for various nordic countries to pioneer a new way of reclaiming the humanity of data exchange. The following insert from the MyData paper highlights some of the crucial rights of an individual that should be at the heart of the NGDLE, but are never articulated in the ELI paper.

Tom and I got to chatting about just this the night before the presentation, and he quickly came up with a visual demo of dashboard for what it might look like to control various applications. It is a simple beginning, but it returns me to the MIT Hackathon with Audrey and Kin in March of 2013 when we first started imagining what Reclaim Your Domain scenario. This talk helped me refocus Domains on that core concept, and I’m hoping Tom and I can revisit this in more creative detail for the THETA conference. 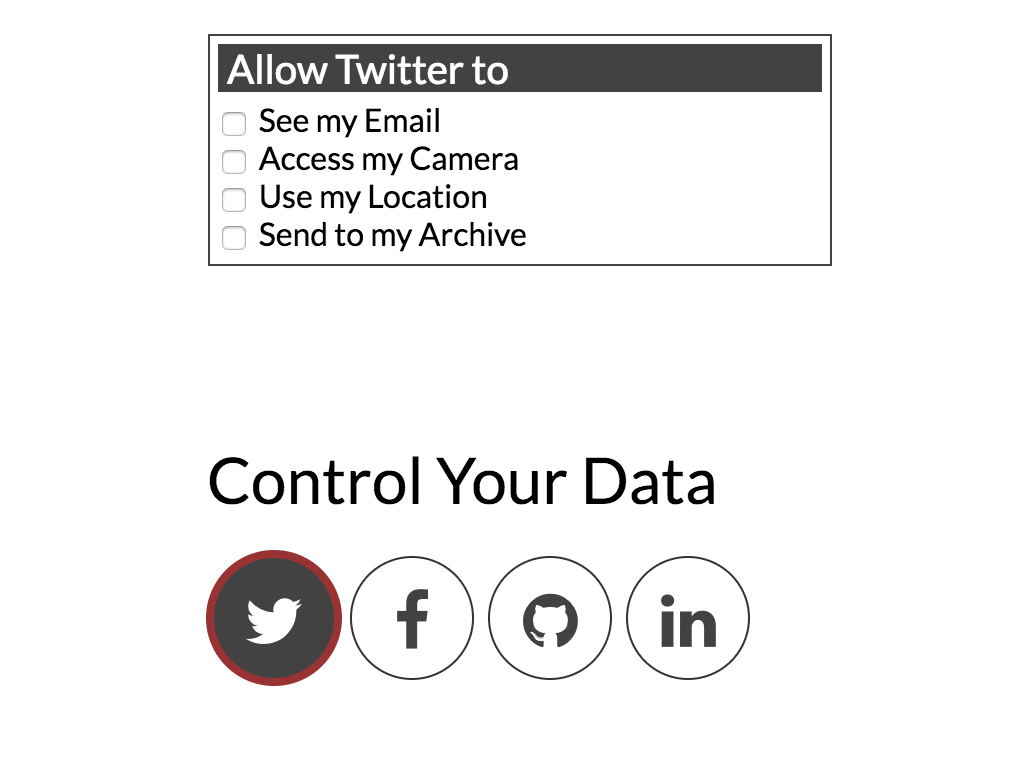 It would be interesting to have an operational dashboard that folks can play with at the conference to get a sense of what a human-centered approach to managing their data even means. But for me the real genius of the MyData vision is it is not limited to education, these are questions we need to ask about all the systems we interact with on a regular basis. If Domain of One’s Own is to be at all meaningful, it has to tap into something beyond the narrow idea of a course, a student, an instructor, etc. it has to tap into how we use this technology as people in everyday life, and why it’s valuable to us.  At the same time, the questions highlighted in the MyData document illustrate our lack of agency when it comes to our learning in most applications. It underscores how dangerous the blind push for analytics and personalization can be, which reinforces the ethos around Domains as a means to become better informed and equipped to deal with these digital environments, while at the same time without being constantly surveilled.

So, that was the basis of this talk, it needs some fine-tuning for sure, but I have to admit I got some assistance from a couple of oddities that helped loosen up the audience a bit. The first was I arrived the morning after Trump’s “Last night in Sweden” comments. The memes were too fun not to start there:

The second and most fortuitous link was from the Commodore USA twitter account I follow. For some reason, mere minutes before my presentation, they linked to a 1984 segment of a Swedish television show wherein a gentleman explains the utter uselessness of personal computers:

This clip framed beautifully how easy it is to look back and laugh at how wrong he was, but the far harder bit is to try and ethically shape where it should go. I really am compelled by the MyData model in the Scandinavian countries because they may be able to pull it off. It was interesting to talk with folks about Nordic Mobile Telephone: the world’s earliest cellular phone network founded between Sweden and Norway in 1981. All this stuff has to start somewhere, and with the General Data Protection Regulation coming into effect across the EU in 2018, rethinking the way personal data is managed will be an even more pressing issue.

In short, this presentation was a welcome return to some of the core principles that makes managing your own domain compelling. For me it has always been a place to start rethinking how we can manage our online world in relationship to others without necessarily having to be subsumed by them. Kin Lane’s recent post about domain literacy speaks to this, and such an approach overlaps in some powerful ways with a more robust approach to web literacy. Anyway, that’s part 1 of my trip to Sweden, now for 2 and 3 tomorrow and Friday The loneliness of a long distance blogger.

*I hate to link to anything on the NMC website given how horrible they are at archiving and preserving old links, resources, and media on their site. From 2008-2010 I did quite  a few presentations for them that at the time were hosted on their site, but my broken link checker regularly reminds me those have all but gone away.

† I still have not seen a response from the NMC, but seems to me ignoring such a full-blown attack on that organization’s very reason for being reinforces what Audrey is arguing: the Horizon Report is meaningless.

This entry was posted in presentations and tagged Karlstad, MyData, NGDLE, Tom Woodward. Bookmark the permalink.

11 Responses to On Next Generation Digital Learning Environments