Open as a Power Relation 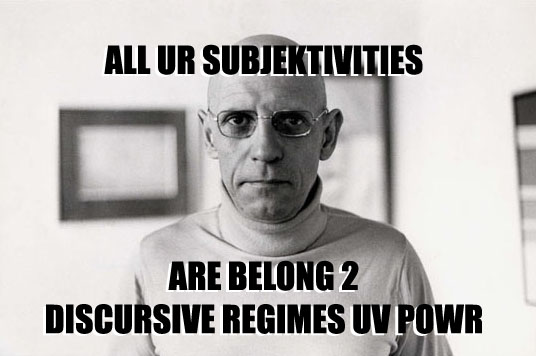 I’ve been co-teaching a True Crime course here at UMW (which is a blast), and last night we discussed Michel Foucault’s Discipline and Punish. If any of you out there were in grad school during the 1990s or early ’00s like me, just seeing this book title may cause you to break out in hives. Apologies. That said, it still remains one of the most powerful things I ever read in grad school, and returning to it with a group of Freshman last night reminds me how viscerally accessible and conceptually cryptic this book is all at once.

The discussion about the book last night was led by three students, and as my collaborator Paul Bond noted in this post they did a good job of breaking down the reading and trying to contain the conversation. One of the things they didn’t mention, and which I think is crucial, is Foucault’s methodology—the way in which he’s trying to avoid an over-determined argument about crime and punishment that results in some totalizing claim that as a culture we have become somehow greater (or even worse) than those who have come before us that engaged in ritualisitic public torture and execution.¹

It’s really compelling, and somewhat easy, to fall into an evolutionary theory of history whereby we are the best of all possible developing cultures—not unlike Steven Pinkers’s argument in The Better Angel’s of Our Nature. There’s a methodology at work in D&P through which the transformation of crime and punishment is examined along the lines of specific historical, political, and cultural shifts in the Western world from 1760 through 1840, namely the democractic, scientific, and humanistic revolutions that coalesce as a broader historical moment known as the Englightenment. Foucualt refers to the way he reads this moment as a genealogy, the four general rules of which I outlined here for the truecrimers. Foucualt doesn’t come up with a sensational thesis about whether the Enlightment happened or not (something which Steven Pinker’s argument seems to do with the changing nature of violence), rather he challenges the ways in which it’s couched as a necessary improvement over what was when it comes to crime and punishment. The move away from the body towards the soul, as he describes it, is not so much suggesting that punishment was brutal and is now humane—but that the way we administer punishment has changed for broader political, economic, and cultural reasons. It’s a way of reading and “writing the history of the present” (pg 31 or the final line of chapter 1).

As I was reading the chapters again it reminded me a lot of my facorite cultural critics of edtech right now, namely Audrey Watters, Mike Caulfield, and Brian Lamb. And while all of them may or may not care for my comparison, I think they’re all are doing just the kind of critical studies that I found most enthralling about graduate school, save the jargon and egos of course. They’re constantly looking for a broader “complex social function” of education technology. EdTech is not simply about whether it can save educational from “failing” or not, but how that very frame is connected to a broader complex of social functions. Which immediately begs the second point of Focuault’s genealogical method: “regard edtech as a political tactic.” Exactly, how is edtech being used as a means to shift the larger culture of education as it reales to just about every element of our culture.

Third, “make the technology of power the very principle of the humanization of the education system and of the knowledge of man.” How does edtech become the platform and possibility through which power is continually maintained as a relation in the education system. Shit starts to get real. And four, “study the metamorphasis of educational methods on the basis of the political technology of the body”. How does the current shift in our ideas of education move us into different relationships to power, the body and the poltiical technology that everywhere mediates this relation. In other words how do we read and write the broader cultural shifts in education right now in relationship to power, knoweldge, the state, etc. This is crucial to “writing the history of the present” —and when I am looking for such frame for the world of edtech (which is in desparate need of it) I have my goto sources.

This is not something I just discovered, however, I have been counting on all of those folks as filters for these ideas for years. What the reading of Foucault did was to help me reframe it as a kind of methodology that brings some of their underlying methodology of their critiques to light for me. What’s more, it helps me come to terms with increasingly convoluted and denatured concepts like “open” in the sphere of edtech. Nicole Allen tweeted a couple of hours ago that….

To which I started thinking, hmmm, this suggests that the license undergirds a whole series of relations that are impossible without it, but at the same time that’s not true. In fact, I responded….

@txtbks Not sure licenses can truly guarantee any authenticity of open, as much as I see the value. Open is a relation more than a license.

And while it seems simple enough, the idea has actually helped me come to terms with the idea of open in a different way than a somewhat linear narrative of good to bad, pure to spoiled, punk to corporate. The problem with the term openwashing, at least for me, is it suggests that open was pure and is now sullied. But I’m not sure that’s the case, because if we just give it a new name the same thing will happen under a different title. The same goes for license, somehow the license became the means by which open became defined, and as a result in many ways transformed a sense of how we understand it. Changed the very nature of its soul, if you will 🙂 Open represents a series of power relations right now that tell us a lot about our cultural moment. Tracking the word, it’s uses and abuses, as well as its limits and possibilities traces a broader cultural shift through the lens of educational technology and beyond that is both truly fascinating and politically important. I seems to be very much what Audrey Watters is already doing with her forthcoming book Teaching Machines (in terms of a methodology if not a particular subject matter)—but that’s no surprise because she’s a million years a head of most of us with all this stuff.

It’s cool for me to start making these connections while teaching a class on True Crime. The ability to move from 17th and 18th century crime narratives to genealogy as methodology to open in edtech on this blog is awesome. This is the reason I signed-up for the higher ed racket in the first place. I wanted to see broad, cultural connections that not only demonstrated something about our moment, but also provide the possibility of staging an intervention all the while. That’s what I want.

1. We’ve read more than a few narratives and sermons framing public executions in 17th and 18th century colonial America. So the “barbarity” of that era is very much with us.

8 Responses to Open as a Power Relation