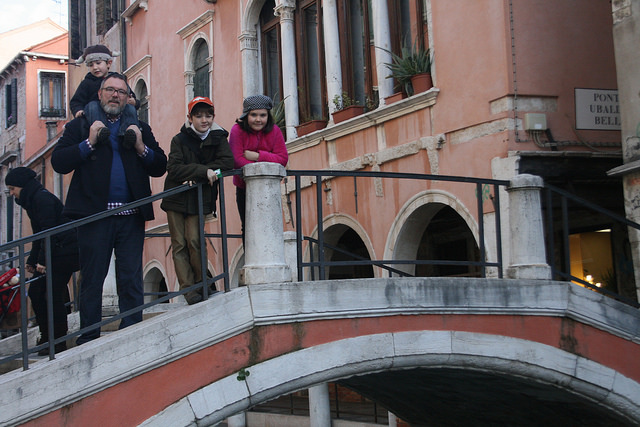 My family and I spent close to four weeks in Italy over the Winter break. We go every two or three years to visit Antonella’s family and friends, and often remain in Trento for most of the trip. That was the case this time as well, but we did manage to take a few short trips to Verona, Trieste, Venice, and Milan. I have to say Trieste is a city ready to be re-discovered. It’s an absolutely gorgeous bordertown on a hill, overlooking the adriatic, and featuring some truly mindblowingly beautiful cafes.

Nonetheless, this short post is not about Trieste, but rather the city of water: Venice. went went theie on New Year’s Eve, and aalking out of the train station into Venice is probably one of my most memorable moments I’ve ever had while travelling. It’s like you’ve immediately entered another world—and it’s all right there immediately. I imagine it’s what someone must feel like coming out of Penn Station for the first time in New York City. We took a bunch of videos while in Venice, in fact I intentionally took more video than photos on this trip because I wanted the kids to actually hear and see themselves in these other places (as well as their relatives). So, below are a few videos I culled, there are scores more that I’ll put online sooner or later, and  I actually uploaded some of the images to my Flickr account, nothing like writing inspiring one to do!

Anyway, below are a few videos of of a few sights during the day-trip.

Psycho Pigeons in Venice
Piazza San Marco may be the most stunning square in Italy, but don;t let that fool you—it’s the pigeons that keep people coming back. The pigeons in this square are insane, they will land cover you like a swarm of bees if you have corn kernels in your hand, and it jsut turns out there are people there willing to sell them to your children for 2 Euro a handful as we soon learned.

Venice by Vaporetto
The gondola get all the attention for their iconic place in the city’s image, but the best and cheapest way to see Venice from the water is by water taxi (or vaporetti). It might seem excessive to may 7 euro for a water taxi ride, but it lasts for an hour and provides an awesome view of the city from the water. Below is a video of Piazza San Marco from the water, we caught the vaporetto right out of venice, and the view is awesome.

Eyes Wide Shut
Finally, we went looking for a venetian mask-making workshop for the kids and came across the mask shop that worked on the costume design for Stanley Kubrik’s Eyes Wide Shut. They had a bunch of wild steampunk masks in the window, and browsing the store was a lot of fun—they had some amazing designs.

A look around the shop

This entry was posted in family, fun, Italy, travel. Bookmark the permalink.