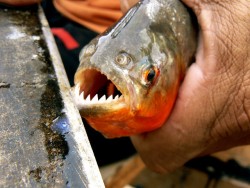 I was talking with Martha Burtis in the office during the week, and she off-handedly mentioned a Pirahna attack in nearby Lake Anna. My imagination ran with the possibility, so today I did some research and found the original posting on the VA Outdoors forum thread I believe she was referring to from 2009.

A resident at Lake Anna reported that their 12 year old son was throwing a stick into the water for their Labrador retriever Sam to fetch when suddenly the dog started emitting loud yelps and frantically started swimming to shore. When Sam got to the shore, he had severe wounds to his legs and torso and was bleeding badly. Sam was taken to a veterinarian who treated the dog and called the State of Virginia Department of Game and Fishes. Game Wardens used nets in the area of the attack and subsequently netted about a dozen Piranhas, the largest about 2 pounds. Officials stated that it is not unusual for aquarium owners to release Piranhas into lakes when the fish get too large for their aquariums; but usually Piranhas cannot survive the cold climate that is present in Virginia. Fish and Game officials speculate that the warm waters near the Lake Anna Nuclear facility allow the Piranhas to survive. Officials are consulting with biologists about how to address the problem; meanwhile they are going to issue an official warning to people to avoid getting into the water until the Piranhas can be eliminated from Lake Anna.

Sam is resting quietly in the hospital recovering from his wounds. Anyone wishing to send cards please send to the following address:
FOS Veterinary Clinic
412009 Gotcha Lane
Fredericksburg, VA 225678

It’s such an awesome story. Turns out it’s an April Fools prank from 2009, and the story is a textbook example of balancing the fantastic and the believable. The pirhanas attacked a dog, not a human. The dog was hurt, but not torn to pieces by the ravenous fish. The placing of this story in Lake Anna, which is a manmade lake to cool the North Anna Nuclear Generating Station, makes the whole thing somewhat plausible. My favorite bit has to be “Fish and Game officials speculate that the warm waters near the Lake Anna Nuclear facility allow the Piranhas to survive.” So good—I was totally sold. I also like how they give a not so subtle gotcha in the vet’s address.

I think this would make a pretty awesome writing assignments for ds106. Have students come up with a plausible April Fools Day prank. It has to be subtle and fantastic at once, it can’t name anyone real. It might go terribly wrong, but that’s a risk for just about any ds106 assignment 🙂 The thing I like about this one is how hard it is!

This entry was posted in digital storytelling and tagged ds106, pirahna. Bookmark the permalink.