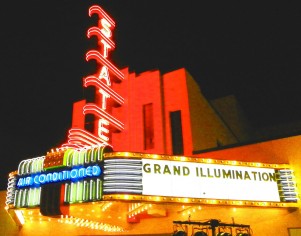 Today the whole family went to the State Theater in Culpepper, Virginia to watch the 1996 alien disaster movie Independence Day, which seems approporaite on the 4th of July. It was the first time we went to this historic theater since it was re-opened after twenty years of sitting dormant. It was returned to it’s 1930-era moviehouse grandeur with art deco adornment, a single screen auditorium as well as a balcony. It’s equipped for projection of digital, 35 MM, and nitrate films. The last two formats are particularly relevant given it’s around the corner  from the Library of Congress’s Packard Campus. And the two have a working relationship which means the State Theater has access to one of the greatest audio visual archives in the world.  It’s cool to see Culpepper embrace the fact that it’s poised to be a film mecca in the middle of rural Virginia. I really love the incongruence there.

As for the feature, the last time I saw Independence Day was in a movie house in Los Angeles—although I can’t remember which one. I was not a fan, but I was also at the height of my film education so my standards were a bit more stringent. The film is certainly a Hollywood pot boiler, but it laughs at itself and is a lot more tongue-and-cheek than I gave it credit for the first go around. It’s notable for bringing disaster films into the era of compuer generated special effects. And, to be honest, there’s no greater guilty pleasure on the 4th of July than an over-the-top patriotic celebration of the U.S. of A. Love it or leave it!

All that said, my fascination watching it for the first time in nearly twnety years had less to do with American Empire than technology—can we distinguish the two anymore? The plotline of the movie depends on humans figuring out the weakness of these ruthless alien trawlers of our natural resources. While they’re a far more technologically advanced civilization, the story ultimately rests on infecting the alien network with a virus which needs to be uploaded into the Mothership’s local network via computer. You can view the scene that provides the explanation of this theory for giving the aliens a virus here. It’s absurd for a number of reasons, but the idea of human computers seamlessly interfacing with an advanced alien civilization’s network is foremost amongst them. And much has been written about this already on the internet.

Although if you you can suspend disbelief, the film also marks a moment wherein the idea of networking becomes akin to our own designation as an advanced technological civilization. It’s 1996, a large part of the U.S., and the world beyond, is just getting familiar with the everyday idea of networking on a personal level. With the meteoric rise in popularity of the World Wide Web, the introduction of a virus through a network to an alien species wouldn’t seem nearly as crazy as it might have just three years earlier. It’s actually something can actually relate to. The plotline of Independence Day is in many ways about a broader conceptual global shift in humanity as a highly technological civilization. We actually are beginning to understand the basic implications of networks on a rudimentary level as a populace.

This is something the film is conscious of given its playful reference to another film about dramatic advances in humanity’s evolution: 2001: A Space Odyssey. The moment when the characters played by Will Smith and Jeff Goldblum are heading off to save the world, when Goldblum opens his laptop he is greeted with an image of the eye of HAL and a playful “Good Morning, Dave…”

This is yet reasong to create the database of internet technology as seen in film and TV that I discussed already in this post.

This entry was posted in movies, The Internet Course and tagged id4, Independence Day, movies, tic104. Bookmark the permalink.