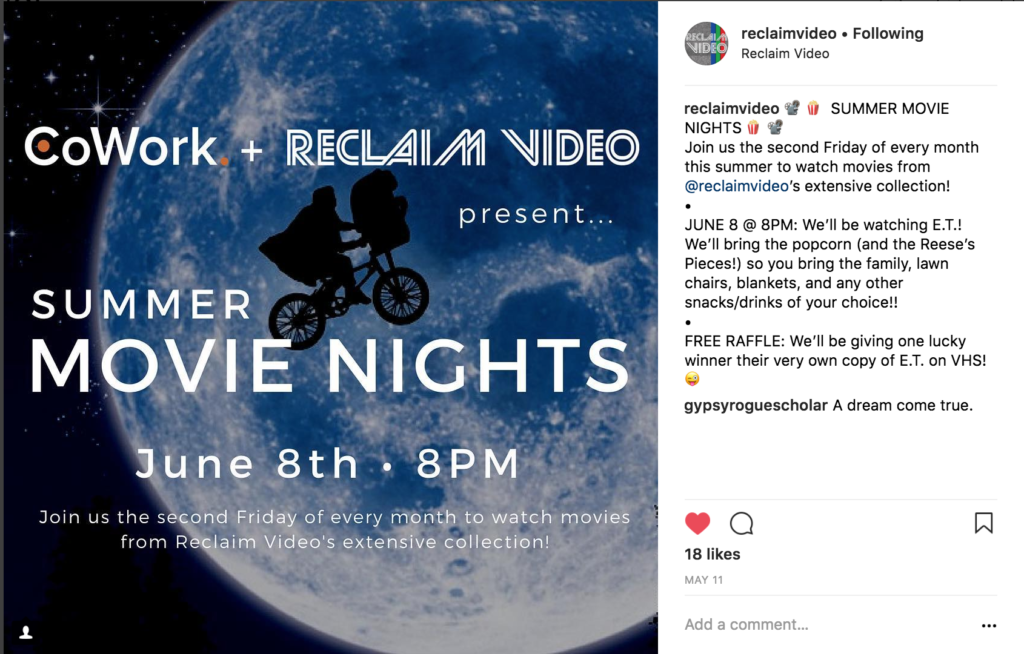 I was on the ground for Reclaim Video‘s grand opening in Fredericksburg on June 8th, and I’m still reeling from all the goodness. I’ll be posting on numerous elements of Reclaim Video over the next few days, and it probably makes most sense to start with the video rental store’s grand opening, which was paired with the launch of the Summer Movie Nights series. Damn we know how to market things with absolutely no business model attached, but in fact that might end up being the point of this post.

Awesome turn out for our first movie night!! ? ?

In many ways Reclaim Video started as a healthy mix of nostalgic fantasy and joke. Fantasy because I always wanted to run a video rental store, and joke because nothing could ostensibly be less relevant in this day and age of Netflix and Amazon Video. But as it turns out it’s neither a joke nor a fantasy, but rather a timely inflection point. I’m increasingly convinced Reclaim Video represents a useful cultural analogue for the web on several levels that are worth looking at in more detail (and I plan to), but let it suffice to say for now the predominance of small, mom-and-pop video rental stores before the advent of the corporate monoliths like Blockbuster is one readily apparent comparison; the perceived existential threat home video posed to “brick and mortar” movie theaters; the ability to more easily record, edit, and reproduce media (with the accompanying copyright FUD); the importance of intelligently curated collections (nothing worse than Blockbuster employees being clueless about film and Netflix’s algorithm pimping their own warez); and that’s just a few off the cuff. But the real analogue between the VCR rental store and the web is how it represented an entertaining and relatively unstructured education. In the early 80s a whole generation was suddenly provided libraries of films from the past 50-60 years—in a few short years an entire medium became far more accessible than ever before. It opened up a brave new world of film history to a generation of interested kids. It was an intensive, ongoing education in visual culture and aesthetic taste that a kid was highly unlikely to get in the U.S. K-12 system throughout the 80s. I can probably name the number of movies I watched in K-12 on two hands from 1976-1989 (and it always seemed like we were getting away with something when we did). Yet, the understanding of how film works and what it means to both interpret possible meanings and breaking down filmic syntax are both intellectual and practical skills that have never had more currency given video has become the predominant means of communicating on the web. So, in many ways, Reclaim Video does not seem so much a joke or fantasy when looked at in a certain light, but much more a useful road to wander down to see what happens 🙂

But, the other part of this equation is that Reclaim Video has also been a way for Reclaim Hosting to deflect any kind of overt, crass marketing of our hosting services. We want to intentionally avoid any of that, while at the same time capturing and communicating the trailing edge technology spirit of Domain of One’s Own. So, even our anti-marketing approach with Reclaim Video is arguably marketing, but its not so much trying to sell you a product as much as foregrounding the role technology plays in shaping the deep cultural valences of mediated education. It’s the culture that provides that shared object of desire that makes so many of the connections and relations possible—and finding analogues in the analog media environment is one way at it.

Join us June 8th at 8pm for our launch party and first in a series of Summer Movie Nights as we watch E.T.

So, that’s a whole lot of words spent on what promised to be a very straightforward post about Reclaim Video’s grand opening and our first screening in the Summer Movie Nights series, so let me get to those now.

We opened the doors of Reclaim Video less than 6 months after we locked into the idea of actually running a video store (the idea was born over a year ago, but the decision to do it was cemented in December of last year). We have been pretty good about making things happen once we lock-in, and Reclaim Video is no exception in that regard. No detail was left out, right down to the laminated membership cards:

And we planned the grand opening alongside a Summer Movie Nights film series to bring folks in and start to create a bit of energy around the idea, and that seems to have worked a treat.

We had a healthy number of folks visit Reclaim Video from 6-7 PM that evening before taking in the feature presentation: E.T. And when all was said and done 32 people came to see the film, which is crazy to me. It was free and open to the public, we served Reese’s Pieces and fresh popcorn (also for free). In July we’ll be showing The Princess Bride, and we already have 4x as much interest as for E.T.—which could mean we are on to something. E.T. holds up quite well 35+ years later, and so much of its genius is in the cultural detail of everything from the toy tie fighter to the Space Invaders t-shirt to the submerged sense of dread and compassion of a family negotiating divorce. It hit the spot, and the idea of having our own makeshift, DIY theater for the community was awesome. In fact, folks in our strip mall noted that Reclaim Video as an actual storefront that does actual things for the community, like a film series, is breathing life into what was essentially a forgotten commercial space. I think the coolest  outcome of all of this would be that we are part of a broader investment back into the local culture that might galvanize some shared sense of the power and meaning of the media that continues to shape us—I guess that’s the new fantasy 🙂

This entry was posted in Reclaim Video and tagged E.T., ReclaimVideo, SMN, summermovienights. Bookmark the permalink.