I wrote about my foray into the self-hosted world of feed readers with Tiny Tiny RSS earlier this month, and I have to say it gave me some satisfaction to read that Martin Hawksey is giving this oepn source feedreader another spin. If it’s good enough for Martin, then who is the Bava to complain? Plus, it seems he’s already making the application better—power to the feed people!

I’ve been attending to my feeds pretty religiously since I setup my reader. I even started to work out a system for regularly starring articles I want to share and/or come back to later. This is very similar to how I use Tumblr, and all the posts I reblog on Tumblr are automatically syndicated into a subsite of bavatuesdays: tumblr.. I wrote about this setup a while back, and the reasoning behind it was to push all the posts on Tumblr back to my own site so I could archive them. Nothing too crazy.

Now that I have more than 230 starred posts (and I can forsee many more), I figured I should start doing something similar for these posts what I did for the Tumblr posts. Turns out it was easy enough to accomplish because Tiny Tiny RSS provides a feed for just about everything, including all my starred articles. I grabbed the feed (as demonstrated below) and pull it into a another subsite of bavatuesdays: favorites..

Once you click the RSS icon you get a public feed for your starred articles anyone can see. I put this URL into FeedWordPress on favorites. and everything I star in the reader syndicates to a subsite of my blog. 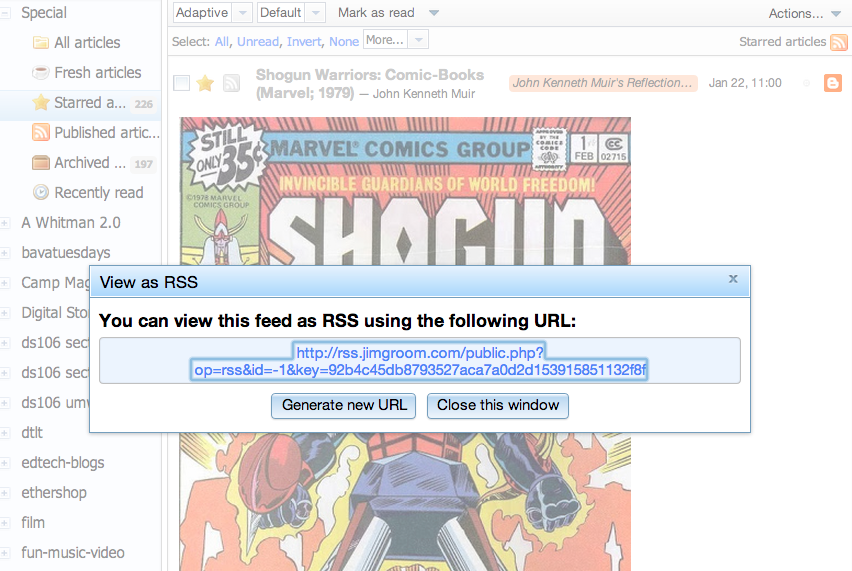 Now I wonder if I can do something similar with Reddit because that would be the holy trinity: feed reader, Tumblr, and Reddit.

This has got me thinking that I might need to consider how I want to start tracking and archiving my distributed work on the web a bit more. I’m using Tumblr and my feedreader to filter posts I want to share and/or save. I’m imagining this is how I’ll be using Reddit as well. What I would like to do is come up with a set of categories and labels that brings all of my favorites on these services into a common space on bavatuesdays, and from there I can both archive them as well as share them out. I’ll keep toying with the possibilities, but if nothing else it’s got me trying to seamlessly push everything I share on these networks back to my own site simulataneously. It’s how the web should work. Seamlessly archiving the stuff we do while out and about on our own home sites shouldn’t be extra work, it should be fluidly built into the process.

Update: One issue I discovered is that only 57 of the 230+ posts from my starred folder of the feedreader syndicated. I’ll have to see what’s up with that.

This entry was posted in rss and tagged Tiny Tiny RSS. Bookmark the permalink.