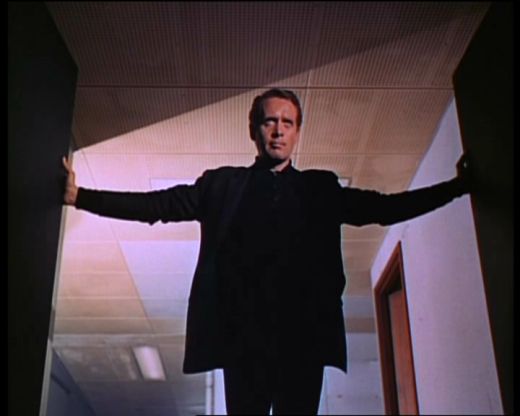 I’m thrilled Talky Tina suggested the 1960s U.K. TV series The Prisoner as the theme for this summer’s open version of ds106 for two reasons: 1) it’s a brilliant show, and 2) it’s a welcome opportunity to get back in the creative habit. Someone (not me!) has created an impromptu site for the “course” at prisoner106.us, and we’ll have to start aggregating relevant posts off a prisoner106 tag once we get a sense of whose playing along. In the interim, the #ds106 or #prisoner106 hashtags will be good places to check-in if you’re interested.

I’m taken with this theme because it locates me in a very specific historical time and place. UCLA in 1994. I was working on campus in the Audio Visual Services department, and the office was just recently equipped with networked computers that had this new fangled technology called the web. I was enamored. At the same time I was turned on to this psychedelic British show that was all about a government agent that is abducted and imprisoned after resigning his post. People told me it was more than a just a show: it’s an allegory for the police state; a meditation on surveillance; a pastel postcard of dystopia. I tend to think about it as a proto fairy tale version of The Wire —it always comes back to America for me 🙂 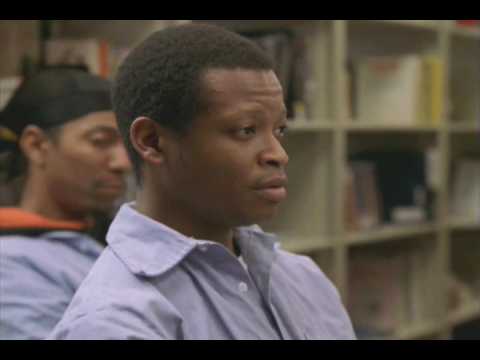 Anyway, so what did I do with the world wide web in 1994? Well, exactly what I do with it 20 years later, seek out stuff I am interested in. One of those things was The Prisoner, and I found in 1994 what looks an awful lot like this Six of One site (or was it this one)—the Prisoner fan appreciation site. In fact, I think it still has the same design as it did in the mid 1990s 🙂 I was particularly taken by the story of this fan appreciation group’s first honorary president, which is the bit that anchors this website to my random web searches 20 years ago:

The Honorary President of the society was Patrick McGoohan, who responded to the first contact from Six of One with a telegram which read:

“Profoundly grateful to you and the Society for your interest and understanding. Am honored to accept Honorary Presidency. Blessings to you all. Half a dozen of the other. Be seeing you.” – Patrick McGoohan

The enduring quality of Six of One comes from the fact that we recognize each individual member’s right to interpret the series in his or her own way – or not to bother at all! We provide a forum for debate but at the end of the day everyone makes up his or her own mind. Six of One is run by a number of stalwart members who contribute their spare time to making the society work – from day-to-day administration to stage management of major events such as our Conventions.

How cool that McGoohan engaged the community, and in turn they used his telegram as a springboard to discuss the importance of respecting the multiplicity of interpretations the series engenders. Hence their name, Six of One, which plays off McGoohan reference to “half a dozen of the other” in his telegram. So awesome.

The other thing I would find myself searching for back in the day, and my watching of episode 1, “The Arrival,” two nights ago reminded me of, were the maps of “The Village” (in black & white and color).

I have to think of a fun assignment for the maps. I just loved this detail of the show. What struck me most back in 1994—which dates me a bit—was that I could download this map (as well as my tax forms) onto my computer and print them out. It seemed truly amazing to me at the time, it was one of the few times in my life when I was truly blown away by a technology.

Interestingly enough, while looking for those maps in 2015 I came across yet another Prisoner gem that I think Paul Bond (who is a ds106 prisoner #4life) would appreciate: Jack Kirby’s illustrations of  a planned, but never completed, comic book version of the series. They are gorgeous: 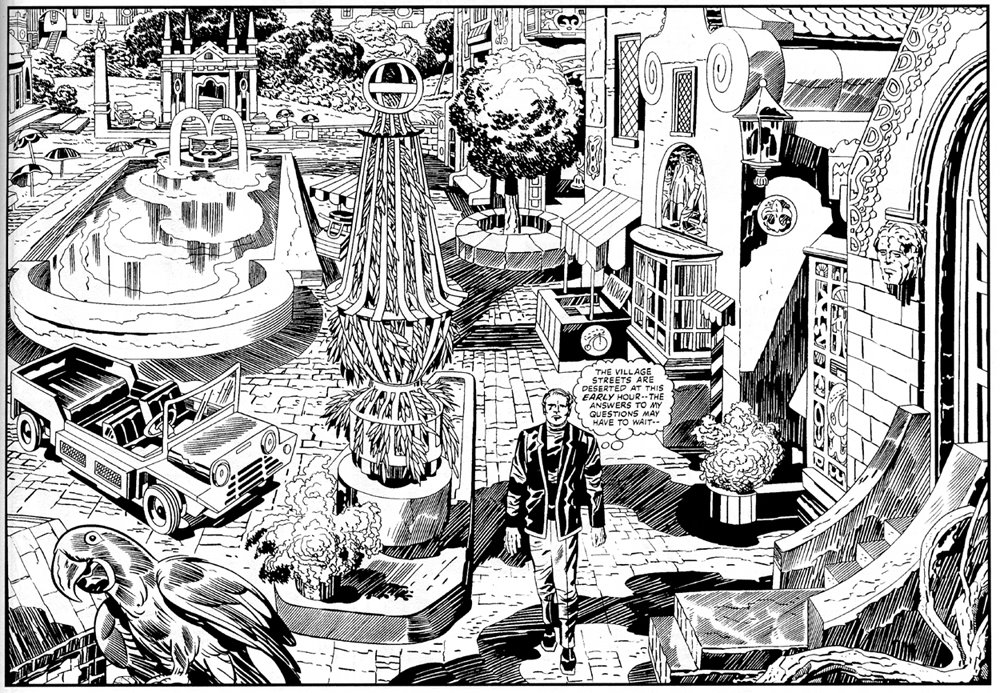 I just want to bust out my pastel crayons and color the images in. What a cool coloring book this would be for the kids! 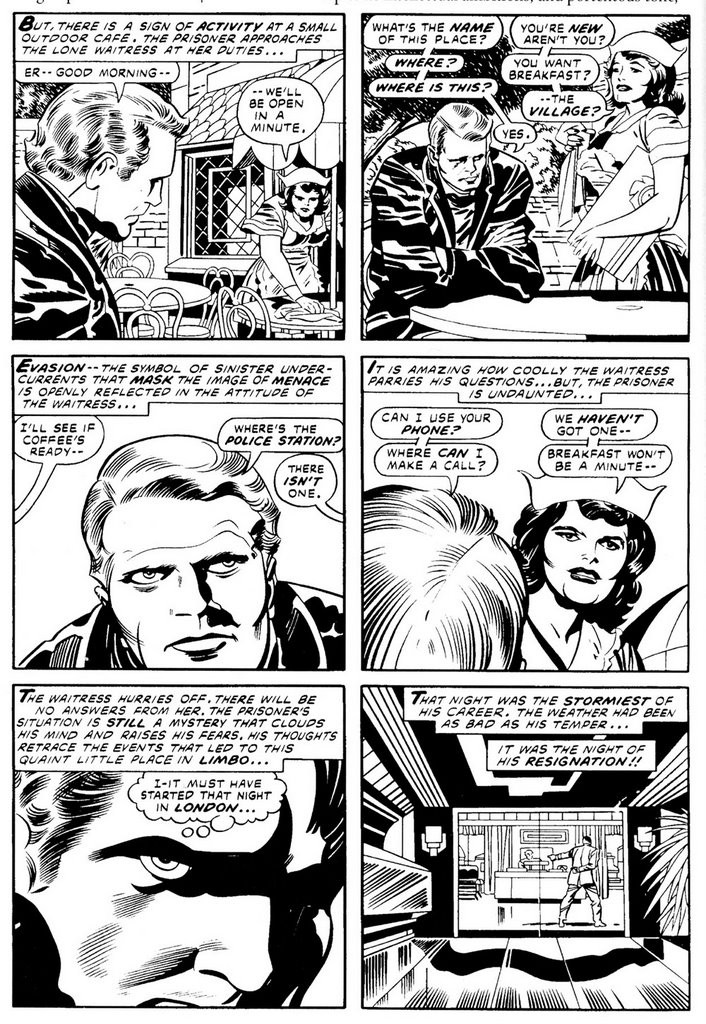 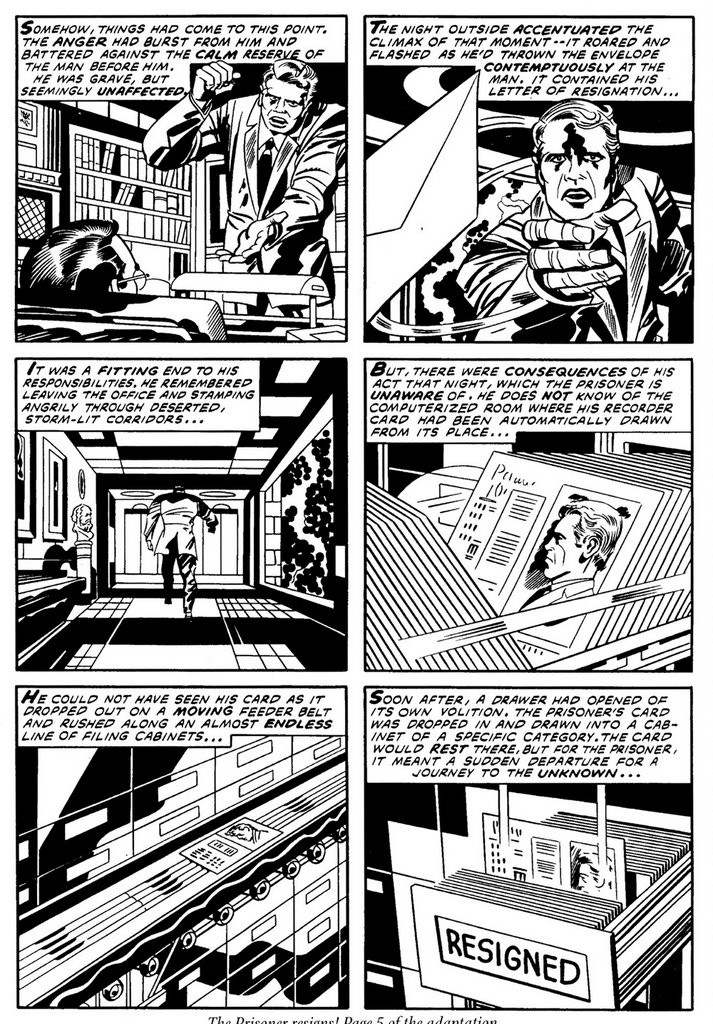 The theme of resignation weighs heavily on my mind these days, and I love the way Kirby visuals the opening scene in comic cells. More fodder for some prisoner106 art. Oh yeah, there are also 3 novels based on the series that came out in the late 60s and early 70s.  There were also two video games based on the series made for the Apple II. I want to get my hands on those!

Yesterday Grant Potter posted a link to video about the banned episode of The Prisoner. As he noted in his post:

in the environment of a country torn by the ethics of a military draft, the allegory of #6 refusing to bear arms for the Harmony’s sake proved too much for the network.

Turns out I still use the web for much of the same things I did 20 years ago. It’s just easier to share my ideas these days (this post being a great example of that), and the congregation of folks around the culture that defines us has never had more potential for good, old-fashioned fun. We are not a number, we are free INTERNAUTS.

Update: Upon another watching of the short video about the banned episode “Living in Harmony” Grant shared, turns out UCLA was one of the campuses featured in the bit about the violent political upheavals in the states. Interesting convergence, especially since the other link here during precisely the moment that video discusses is UCLA linking up with the Stanford Research Institute (SRI) on the ARPANET to give the birth to the internet in October of 1969. Reminds me of Repo Man’s lattice of coincidence that controls the world.

This entry was posted in digital storytelling, Uncategorized and tagged ds106, prisoner106. Bookmark the permalink.

2 Responses to Six of One