Summer of Love: Keanu Reeves (the nicest guy on the internet)

You know, I think this might be my first real break through Summer of Love post, and I say that because part of any real process of cultivating love has to start with owning up, letting go, and letting yourself be vulnerable. I’m about to do all three in one post. In the early 90s I saw about as many movies in the theater as humanly possible. Me and my girlfriend of the time would see two or three movies a day sometimes, and it was a wonderful education, but I still have one regret from those heady days of cinema consumption: I was really hard on Keanu Reeves. I blame my girlfriend of the time, in part, because she was a film student at UCLA, and was being pumped with all these intellectual idea of art and aesthetics, but I have to own up—I trashed Keanu every chance I got. Whether it was him trying to do Shakespeare in My Own Private Idaho (1991) or Kenneth Branagh’s Much Ado About Nothing (1993)—or even a flaccid Johnathan Harker in Bram Stoker’s Dracula (1992). Whatever the film, it didn’t matter, I was unforgiving. I went on and on about how he couldn’t act in my haughty 20 something way, feeling all self-righteous and imperious cause no matter what, I could always lord it over Keanu. And when Speed came out (Keanu’s break through Hollywood A-lister film) I broke all ties with his films, and wrote him off for good. I even forgot that I actually really liked him in River’s Edge (1986), Parenthood(1989) (especially), and Bill & Ted’s Excellent Adventure (1989). I seem to have ignored that he put in an impressive performance in Point Break, (1991) and that he refused to do a lay-up cash money sequel for Speed and varied his filmography, giving as much attention to low-budget, independent films as he did blockbusters.

Now, I still held much of my contempt for Keanu through the 90s, I laughed him off in The Matrix (1999), and held comfortably onto my superiority for almost a decade. But come 2000 I had a scare. I saw Sam Raimi’s The Gift, and while I wasn’t expecting to see Keanu, he showed up nonetheless (as popular actors who vary their roles are apt to do) and his performance as the abusive redneck husband was one of his very best. He was truly haunting, and has come to exemplify the abusive redneck husband for me even more so than Dwight Yoakam in Sling Blade (1996). And while I even tried to fight this realization in the theater seats in 2000 while I was watching The Gift given it was Keanu Reeves, it continued to secretly haunt me. Fast forward ten more years, and it just so happens that The Gift plays just about every night on some premium cable channel (and I have them all!)—and I end up watching it just about every night it’s on. That film is becoming a real favorite of mine, as is A Simple Plan (1998) —long live Raimi!!!

All this said, I had still blocked out my decades of unfair aggression and misplaced contempt of Keanu Reeves until tonight, when it all came clear I had been living a lie, a superficial cover-up of my own deficiencies in my lording it over Keanu’s career. It was a rather accidental series of circumstances that lead me here, but I think it had been brewing for close to a decade, so I am kind of thinking tonight was simply a trigger point. Mike Caulfield’s kitschy advertising for EdCamp Keene brought it on: 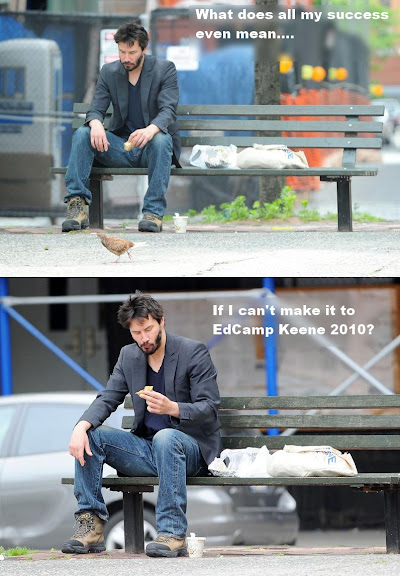 Simple enough image, and joyful in its own way. But when I saw that image I started to wonder about Keanu, where is he now? -how’s he doing? -why did I forsake him? I went to his Wikipedia article for the latest, and realized he’d been working quite consistently over the last 25 years, and unlike most actors and actresses there was no real annoying drama or juicy gossip—it was all pretty straight. Keanu works as an actor, he’s not caught up in all the bullshit, he identifies as a Canadian, was a pretty good goalie in high school, and had a pretty tough childhood growing up—moving from place to place and living with step dad after step dad. I never heard him complain about that, did you? And when he was the butt of all the haters self-satisfied acting jokes throughout the 90s I never saw him lose his cool, did you? He took his super stardom in stride, and kept on going to work, doing his job. But then….then I came across this article on the National Post that made me not only feel bad for being a prick to Keanu for all those years, but actually become a fan—to finally be able to confess my love for him. And, what’s more, it is all too apparent I am not alone as the National Post article makes clear:

A comment thread has started on Reddit in which people from all over the internet have stopped in to share their thoughts about actor Keanu Reeves. The comments paint Reeves as the nicest guy in Hollywood – generous with time and money. And well read. And tough. So tough in fact, that we may be witnessing the genesis of a new Keanu Reeves internet meme. Heads up, Chuck Norris.

Back in the late 90s and fresh out of college I got my first job as an assistant prop designer on the set of Chain Reaction (Keanu was a supporting actor with Morgan Freeman). EVERY DAY for the last few weeks of filming, Keanu treated the stage hands and “grunt workers” (including myself) by taking us out for free breakfast and lunch. He was genuinely a very nice guy to work with.

I met Keanu when he was in Australia doing the matrix. I knew who he was, but when I asked him what he did for a living he answered “I’m a struggling musician”. I thought that was sweet.

I had a few friends working special effects jobs on the Matrix movies, he bought all of them fucking HARLEYS for Christmas during the shoot for the second one.

There are no bad stories about Keanu. I live in LA and work in North Hollywood, and everyone I’ve ever heard out here tell a story about Keanu says nothing but great things. Everyone loves that guy. It’s made me love his movies. I don’t care how great they are. I love to see him, because he makes me happy. I like to know there’s someone like that.

Paul also told me that Keanu once explained to him why he was getting so many action roles. He had injured himself at some point and had fused vertebrae in his upper back or neck, so when he turned his head, his shoulders and chest tended to follow, because of his limited flexibility. “It makes me look dynamic, rather than disabled” was his explanation.

Chatted with a feature writer for Details who spent basically a whole day with Keanu for his profile last year or maybe the year before. He went to a bookstore with him and (this is in the story) Keanu is REALLY well-read: Keanu mused enthusiastically about Thomas Pynchon, obscure poets, Norman Mailer, etc. as he bounces around the book store. Keanu is also a lot better read than he seems, apparently.

I love that Keanu Reeves is emerging as the nicest man in Hollywood, and by extension the nicest guy on the internet. And maybe, just maybe, the nicest man who ever lived. Given this, it is clear he will forgive me my sins, and at the same time it lets me come clean, a baptism, a washing away of all the petty concerns and unnecessarily harsh judgments. In some odd way Keanu has freed me, and knowing he is so nice makes me envious in different ways—I wanna be that nice too. So, if you ever read this, Keanu, I’m sorry for being a prick in my early 20s, and I take it all back. Being the nicest guy ever, and going by what a search for “keanu + nice” gets you on Google these days, you have something a little bit more than talent, you have what so many of us need: a nice bone in your body—in fact, it sounds like they’re all nice. And if you are really as nice as the numerous stories on the web suggest, than I have to say there is no greater legacy. Keanu Reeves is the Chuck Norris of nice, and being that nice is even tougher than being that tough.

This entry was posted in bava Summer of Love 2010 and tagged bavasol10, chuck norris, keanu Reeves, nice, Summer of Love. Bookmark the permalink.

16 Responses to Summer of Love: Keanu Reeves (the nicest guy on the internet)