Posted on June 5, 2010 by Reverend
A Perfect Game on Yie Ar Kung-Fu 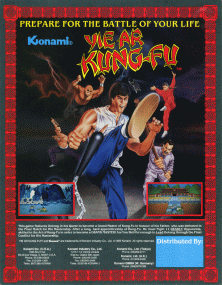 I’ve been in the emulator zone as of late after playing around with Dragon’s Lair, so it’s not too surprising the 80s arcade love abounds. And after playing a host of games on MAME tonight, I rediscovered a favorite from back in the day, 1985 to be exact, Yie Ar Kung-Fu. I played this game for the first time during the Summer of 1985 in a huge arcade in Lake George (which is actually the same arcade where I discovered both Discs of Tron and Dragon’s Lair for the first time). What’s so fun about thinking about these games, then playing them on MAME (or some other emulator), and then going out on the web to find out more about them is that the web does what it does best, spits back all kids of goodies from fans of the arcade culture. The Wikipedia article for Yie Ar Kung-Fu links to some great resources, like Hardcore Gaming 101’s breakdown of the game and all its ports on various Japanese home gaming systems. And then there’s the Gaming Strategy wiki, which gives you a breakdown of Yie Ar Kung-Fu’s controls (which are unique), as well as a walk-through of the game in great detail. I mean look at the graphics someone made illustrating how the controls work: 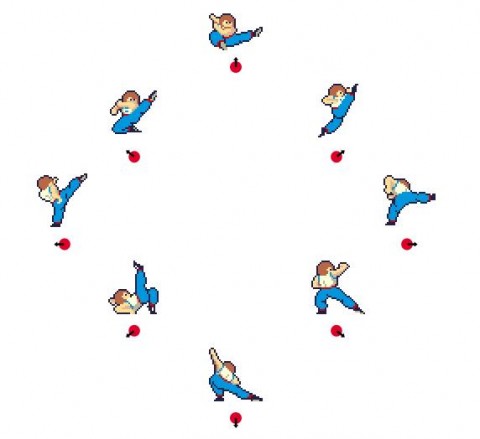 And this graphic is not only beautiful, but key because the actual fighting moves in Yie Ar Kung-Fu are intimately related to the kick or punch buttons and the direction your joystick is pointing. There are over sixteen moves, and what is amazing about this games is how fluidly Oolong (the character controlled by the player) flies through these moves—making it light years beyond Karate Champ (released just a year earlier in 84). What’s even better than finding all these resources, is when the various fans/scholars of the game contextualize the cultural significance of Yie Ar Kung-Fu in terms of its gaming legacy as the article on Hardcore Gaming 101 by ZZZ does quite well:

Created by Konami in the mid 1980’s, Yie Ar Kung-Fu (pronounced YEE ER KUNG FOO, meaning “One, Two, Kung-Fu”) is arguably the peak of pre-Street Fighter II fighters. At the time, little had been done in fighting games and few people, if anyone, had expectations from the genre.

Although Yie Ar Kung-Fu can be a frustrating game, it made great strides for the one-on-one fighting genre. The few fighting games prior to 1985 featured generic karate or warriors guys fighting each other (see: Karate Champ, Urban Champion, many others.) In contrast, Yie Ar Kung-Fu offered a vast array of unique characters. Many of them are simply huge bald guys with apparent distaste for shirts, but many also had weapons such as throwing stars, nunchakus, and chains. A lot of them are simply named after the weapons they wield, which is just a little silly. Many of them were also inspired by characters in old kung fu movies. However, like most pre-Street Fighter II games, you can only play as a single character, a rather standard looking karate guy. Everyone else are unplayable boss characters.

So, thanks to the references on the Wikipedia article, I learned that Yie Ar Kung-fu is the prototype for modern fighting games by bringing a new sense of details and characterization to the fighting genre, and that’s what I certainly remember about it. Yie Ar Kung-Fu was all about the 11 opponents you fight, most of whom are named after their weapons (which I don’t think is silly at all, it metonymically simplifies the whole thing) and the match-up between your character and a nuncha master or pole master is what makes the game so cool—it kinda feels like the fight tournament from the Master of the Flying Guillotine. What’s so memorable about this game is the various characters, you feel like you are taking on a different fighter, and fighting style, with every new opponent—can anyone say Virtual Fighter? Here’s a list of the 11 opponents —two of which are women, which is probably a pretty progressive ratio in video games circa 1985— that I grabbed from the opponents page on the Strategy Wiki entry for Yie Ar Kung-Fu, which, by the way, is using MediaWiki and licensed with Creative Commons—making the inclusion here that much easier-disco!
Buchu

”’Description:”’ Buchu is primarily a large, slow target, making him a relatively easy first opponent. He has a special flying headbutt attack, but he rarely launches it close up, so you should have plenty of time to jump over it when you see it coming. Keep up a steady stream of attacks as he approaches you, and he will walk in to most of them.

Description: Star, like many of your opponents, gets her name from the weapon she uses. In her case, it’s throwing stars. The stars aren’t particularly fast, but she throws them at random intervals, making them hard to predict. They can be jumped over, but if you’re particularly daring, you can punch or kick them, rendering them harmless. Jump back and forth and strike at her when you land.

Description: Nuncha is especially deadly if he gets inside of your strike range. He will continuously attack you with a steady stream of nunchaku strikes. Keep Nuncha at bay and immediately move away if he gets too close. Once he’s inside your strike range, he is particularly hard to hit.

Description: Pole’s greatest asset is his speed. He rarely holds still, and strikes you with his pole at a rapid pace. It is just as important for you to move continuously. If you can get inside of Pole’s range, he is relatively easy to hit. Until you manage to set yourself up to strike continuously, settle for one strike and jump around the screen until you corner Pole against the sides of the screen.

Description: Feedle is an unusual opponent in Yie Ar Kung-Fu in that he actually consists of a team of fighters. The mob of Feedles will approach you from the right or the left. A single strike is enough to send a Feedle running, and you must defeat ten Feedles in order to advance. Feedle is another relatively easy opponent. As long as you strike him before he strikes you, you have little to fear.

Description: Chain isn’t particularly fast, but what he lacks in speed, he makes up for in reach. Chain’s weapon has the longest reach in the whole game. He will swing the chain at you high and low. The high swings can be ducked, but the low swings must be jumped. Use jumps to get inside his defense and strike him until he is far enough away to attack you again. Then move away and jump towards him again to repeat the process.

Description: Club’s strength does not lie in the attack of his chosen weapon, but rather in the defense he gains by employing a shield. His shield can block your attacks, and he will not be stunned or pushed away if you hit it, leaving you open to his attack. Concentrate on low strikes like crouching kicks that attack his feet.

Description: Fan is almost entirely like Star, with one exception. When she initially throws her fans, they launch upward slightly, before settling back down towards the ground and flying towards you. This means you should never attempt to jump in front of her. Always make sure that your jumps will clear her fans and attempt to land behind her for a quick strike before repeating the process.

Description: Sword has particularly good reach. Even though his reach isn’t as good as Chains, Sword is much faster, and therefore, much more deadly. Sword is particularly good at predicting where your jumps will land and moving out of the way, so jumping over him and hitting him from behind is usually ineffective. The trick to beating Sword is timing your strikes so that you hit him before he hits you. Let him walk up to you and strike as early as possible so that you will make contact with him before he swings his sword.

Description: Tonfun is essentially a faster version of Pole. Tonfun seems deadly because of his speed, but he has trouble hitting you up close. You can actually corner Tonfun against the sides of the screen and score successive strikes against him very easily. Setting him up is the hard part.

Description: Blues is your ultimate opponent. He knows all of your moves. Only wise, judicious use of your moves will allow you to defeat Blues. Unlike most of your opponents, you can trade blows with Blues, but this strategy is unwise, as Blues will connect significantly more often than you will. Blues is particularly vulnerable to jumping punches, since you will frequently avoid many of his attacks by being up in the air. Until he is weaker than you, strike him once and jump away.

A brilliant line-up, and the more I talk about Yie Ar Kung-Fu (and video games more generally) after having spent days finding resources about old school arcade games online, the more I realize why they are dominating the Summer of Love posts right now. Finding and learning more about old school arcade games, ROMs, emulators, and walk-throughs in 1994 or 95 was my education on the web. It’s what made me excited about this space in the first place (that and The Prisoner fan site, which has been up since August 1995), the idea that so many others who loved these games freely shared the work they had done, which was everything from a history of a random game to a walk-through to a technical emulation of the game. It was the first real community for learning online I encountered, and it was informal and driven entirely by passionate fandom. And as a result of that, you find yourself seeking stuff out and trying to make it work on your own machine—but desperately needing help along the way. Much the same process re-inspired me about the web in 2004 when I first discovered WordPress. Simple point is, the Summer of Love is all about exploring the passions that got you interested in this space in the first place, without that spark, the love affair is gone. And I have to say, coming back to the vintage arcade game community online is always an inspiration because there is such great stuff out their created and shared by people who are truly into this stuff, and that kind of dedication and enthusiasm is infectious—and exactly what I need right now.