We’re hard at work on a number of elements with regards to the ds106 site, and this post will take you through some of the upgrades we’ve done, possible new features, and even a wish or two. A lot of people have asked me to blog about the building of ds106 over the last year, but truth be told I’ve done very little of the work. Martha Burtis has been the brains behind the assignment repository, syncing comments, and the theming of ds106. And now Alan Levine is dreaming up some way to make a ds106-inspired version of the now defunct DailyShoot and Tim Owens has been hard at work integrating a new theme to ds106.us so that we can feature more work and create a more communal space that respects the distributed nature of the class but still allows people to find things easily and navigate the space intelligently. My part in all this has been the manual labor that makes certain the aggregation isn’t borking and that everyone’s work is attributed to them properly and pulling in cleanly. This is a process I would love to automate more, but I’ll get to that towards the end of what promises to be a long post. 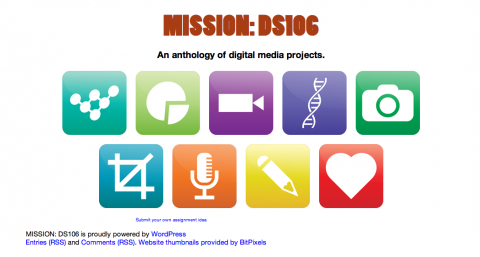 Speaking of Martha Burtis, her brilliant “Rube Goldberg experiment” that has come to be known as the ds106 assignment repository has proven to be one of the most innovative elements of the course. The idea that anyone can submit an assignment for anyone else in the class to do has truly revolutionized the idea of assignments in ds106 all told, so much so that we won’t be assigning specific assignments this semester, but rather asking students to do X amount assignments from the repository. I don’t think I would be alone in saying the class has become infinitely richer as a result of this addition.

What’s more, Martha has been hard at work for the last few weeks upgrading the assignment submissions as well as the display and rating systems. This part of the site has been entirely overhauled, so I’m gonna take a moment to explain the new features and a few new ideas we have in this regard (most of the following language is Martha’s, just to be clear).

A quick note on the technical side of this, Martha’s previous assignment repository was feeding in from the form submissions off a Google Spreadsheet. This new version of the repository is working in conjunction with the premium plugin Gravity Forms. For more details than that you’ll have to ask Martha, or maybe at some point she will blog the details. It is really a site to behold. I love the assignment submission and repository magic. 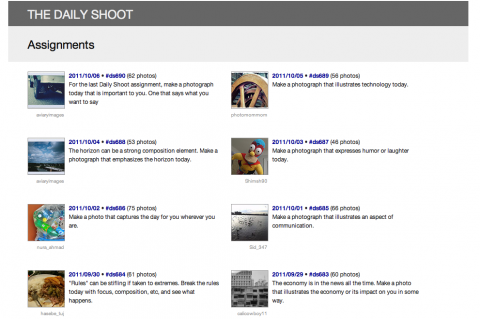 A few months back when the Fall 2011 ds106 course was in full swing the site DailyShoot announced that they were closing shop. This hit the course kinda hard because ds106 has been using the dailyshoot site for a good two to three week chunk of the course since Spring 2010. It was consistently the students’ favorite assignment, and the freedom and regularity of the daily shoots prompts really captured the spirit of the course. So when we heard it was going away we decided to try and make our own, and given there are only a very few of us who have the chops to even imagine something like this, CogDog has taken the lead and I know he has some feelers out to some code geniuses to see if we can get some help on this.

The ability to have something like this up and running as a regular, creative prompt that anyone and everyone can do as part of the class, or even as drive-by exercises, with little or no overhead to sharing it would be the key. What’s more, we don’t want to necessarily limit it to photography—why not audio, video, writing, etc.? Ambitious, but with someone as awesome as Alan Levine as the lead, I have very little question this will happen. In many ways it is very much inline with the digital storytelling programming work he has be doing with Flickr 5 Card and Flickr PetchaKucha, it just steps it all up a notch—which is what ds106 is all about:)

This is still all in the imagining stages, but I have a feeling it will come together quickly, but that might just be me being an eternal optimist. Either way, stay tuned. 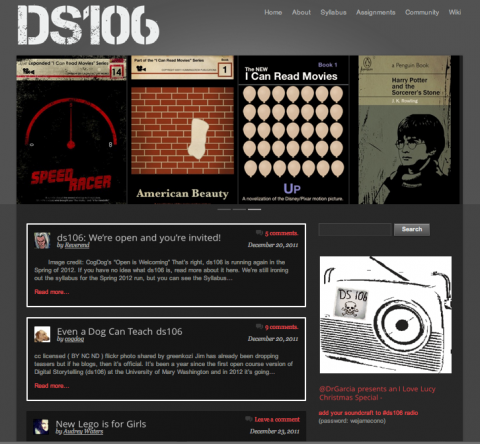 As you may or may not have noticed ds106.us is sporting a new look. And when Tim Owens floated the idea of changing up the entire site with a theme that hooks into the broader possibilities of BuddyPress, I couldn’t resist. Last December, right about this time, while I was enjoying a holiday in Italy I was dreaming of finally using some of the features available through BuddyPress to build in ways to feature the work being syndicated by so many people, as well as building tributaries of community where people could go to see a particular set of assignments, etc. Well, it never happened, and while we could have rested on the idea that the site has worked so far so let’s stick with it, it would very much be to the detriment of the very idea of ds106 which seems to me all about experimenting wildly and keeping what works.

To that end, Timmmmyboy has been hard at work with the premium theme Salutation to see what we can do. And while using a premium theme for ds106 does kill me a bit, it seems that there are very few good free Buddypress themes. As with plugins like Gravity Forms, more and more with WordPress if you want to do stuff with full blown application plugins like Buddypress that fully hook into its possibilities you either need a hardcore, awesome BP coder like Boone Gorges or a pre-packaged theme that we can hack around the edges of—right now we have the latter, though I believe Martha is ever closer to pushing past the hacker boundary.

I love what I am seeing so far, and for over a year I let the directory, profile, and other minimum BuddyPress features that were built-in go fallow. I didn’t even have those pages themed right, and the whole thing was a lot of duct tape and broken stylesheets. Already the profiles, activity stream, and directories look better, and we might even find a way to thoughtfully integrate Groups. Tim Owens has never let me down yet, and I have no doubt he will bring the ds106 site design to the next level, as he has done with so many things at DTLT already. I mean look at the new header, how sick is that? Much more to say on these developments, but hopefully Tim will talk to it in his own words given he actually knows what he is doing.

Automating the Aggregation Hub: my wish upon a WordPress star

Another key element of ds106 has been the fact that the syndication of over 250+ sites at any given time has worked pretty seamlessly over the past year. We can syndicate posts from Posterous, Blogger, WordPress, Tumblr, Drupal, and we will soon be testing PivotX. So, in short, we are aggregating from a wide range of platforms, and as Tom Woodward suggests in his awesome “My Take on ds106” post we are rubbing shoulders with the mythical eduglu.

But there are a few problems in paradise, so I want to spell them out here quickly to see if there may not be an easier way. Last year I had people add their blog URLs using the Add Link widget which used to pull feeds directly into FeedWordPress—the plugin that runs all the syndication on ds106. But the latest version of Add Link puts those URLs into the Links area that then have to be categorized as “Contributor” for them to show up in FeedWordPress. This is an extra step or two, what’s more in order to synch a user with a syndicating feed in FeedWordPress they still have to sign up for an account on ds106.us and I still need to be sure the right user is attached to the right blog URL, all of which takes a bit of time as you might imagine.

I have been doing this manually as of now, and given there aren’t that many people I can still manage the work, and even contact people directly and find out how they are doing, what they need, etc. That is the part of this process I actually enjoy, and I think it makes a ton of difference when you actually have someone greeting you when you submit your URL and info to ds106, it makes it immediately personal, which is how it should be. That said, I would love a way to have people submit their blog URL somewhere in their ds106 profile through BuddyPress and have that run through FeedWordPress. This would seem to solve the relationship that I manually create between user and syndicating feed, ideally it would be something each person could mange and update themselves, and I could monitor the process and focus on the welcome and the communication. What’s more, if people select where they are taking ds106, namely at UMW, York College, Temple University, Japan, or as an open online student, we could tag each of those syndicating posts accordingly so that we can filter posts by each institution or open online students.

Simple fact is that there’s so much we could do to make the syndication bus for ds106 so much smoother, but I don’t have the coding expertise. So, all this to say I would love to hear ideas from people who do, or even get an idea of what a solid programmer who knows BuddyPress and WordPress would charge for something like this (hint, hint).

Finally, the other nightmare on this end was the fact that whenever anyone signed up on the ds106 site they weren’t immediately added to the main ds106 blog site. It was a royal pain in the ass to go back and add them to the ds106 main blog site in order to synch them as users with their syndicating feed, that alone took forever. But thanks to the great, awesome, amazing Boone Gorges that is done automatically now. Thanks Boone. Everytime someone registers on the ds106 site they are immediately added as subscribers to the main ds106.us blog so that I can add them as users to their syndicating blog. Boone kindly shared the code, so I will share it again here should anyone need this functionality (I might even make it a separate post as well so others might have a chance of finding it).I added the following code to a bp-custom.php file and added it to the plugins folder and wrapped in a PHP tags.

OK, I think that is it for now, but this is a pretty good breakdown of where we are at and where we might be going. I’m sure the only part that won’t come to fruition is the part I am working on….god damn it!!