The GIFs that Keep on Giffing

A thumbs up for Burtis Furiosa

A couple of weeks ago the inimitable Martha Burtis both conceived and engineered a brilliant workshop for the freshman orientation. The session was titled “The GIFs that Keep on Giffing” and the mission was pretty straightforward, show 16 incoming freshman how to make two GIFs in less than 25 minutes. Martha and Digital Knowledge Center tutor Callie Liberty had it running like well oiled machine by week two of orientation when I finally joined in.

Martha starts the workshop with a quick overview of what will be accomplished and then turns the floor over to a captivating 3 minute video made by the great Andy Rush about the history of GIFs and more. It comes highly recommended!

After that, Martha is all business taking the students through a 15 minute crash course in making two GIFs using MPEG Streamclip and Photoshop. Callie download and made available scores of trailers, music videos, and memes for the students to choose from for their GIFs because downloading a video of their choice would have been prohibitive time wise. The pacing and effectiveness of this process was most impressive, and you can see the details thanks to a step-by-step tutorial they shared here on the amazing workshop website (http://giffing.net). If you look more closely at that site you’ll notice a few other things: it also features a gallery of the over 380 GIFs created by the incoming freshman: 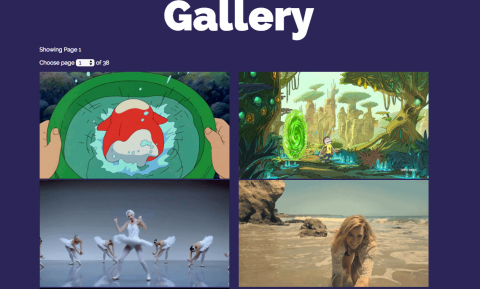 All of which were captured thanks to the GIF submission form Martha created with some of her WP Toolset kungfu! 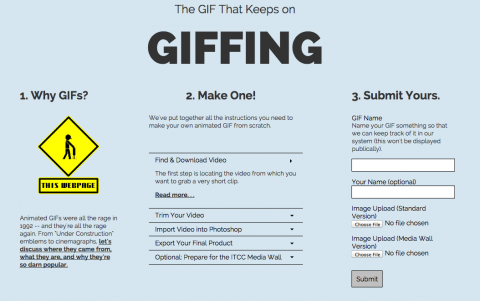 Now I mentioned each student creates two GIFs during the workshop, let me be more specific. They actually create two versions of the same GIF. One version is a straight up GIF, and with a downloaded video, MPEG Streamclip and photoshop you can literally do that in 5 minutes. The other ten minutes are spent adding a mask to their GIF and uploading it they can then play on the ITCC’s two story video wall at UMW!

Some much needed original student content for the media wall! Like, for example, this gem of a GIF by Spencer Scott captured on the wall by Andy Rush.

This workshop is remarkable on so many levels and highlights the genius of Martha Burtis. It’s fun, every single student who came through it was locked in. It’s useful, we now have over 380 masked GIFs (thanks to Michael Branson Smith for creating the mask) that fit perfectly on our media wall and provide a student generated content of the best kind: GIFS! This was made possible by the SPLOT like design of the workshop site. With tutorials, a gallery, and submission of work it becomes a hub as much as a resource site, and it can very easily become a space to project these GIFs directly to the media wall. A very powerful convergence of virtual and physical spaces in the….wait for it….Convergence Center.

I think the workshop and related site highlight some of the best design work being in done in edtech, in my humble opinion. This site can (and will!) easily be added to the ecosystem of ds106, much of which Martha helped build. It’s an excellent example of just how much a framework for creating and sharing is at the center of the very best educational design. And I can think of very few better at this than Martha, so major kudos are in order!

1 Response to The GIFs that Keep on Giffing