But damn they look good! 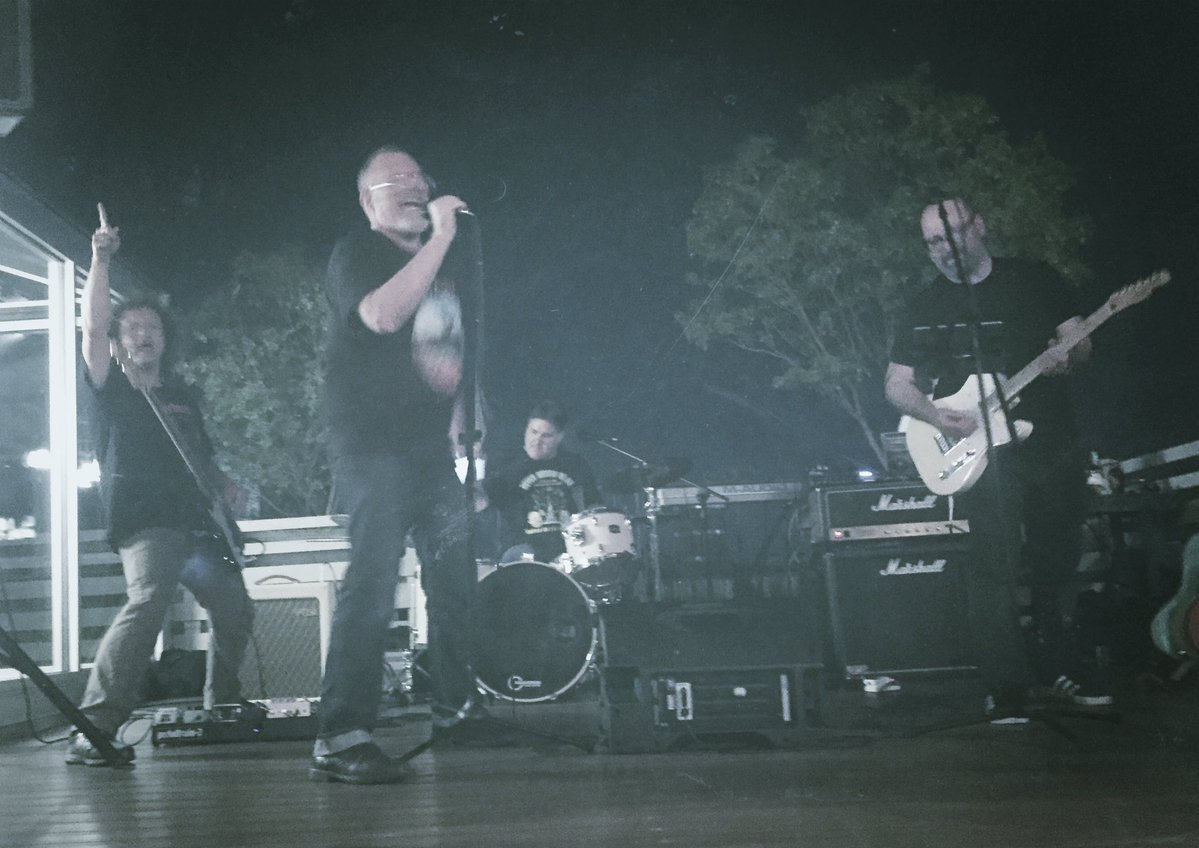 This is the Moodle Fighters (at least some of them): Grant Potter, pictured above rocking the bass, along with Brian Lamb on drums and Mikhail Gershovich on guitar (as well as Luke Waltzer—not pictured here)  made up part of the splinter group from other bands like The Dead Moocmen (who were headliners, but pulled a no show) and Blackboard Sabbath.

The LMs is here to stay, why?? #domains17 #deadmoocmen https://t.co/PoQCt8p1rn

I’m not gonna mince words here, this band sucked. They had a couple of moments like “The LMS is Here To Stay” and “The NSA Took My Data Away” (brilliant work, Grant Potter), but I have never been part of a band that cleared a rooftop bar so quickly—granted I’ve never been part of a band period. I mean here is the before picture of the party that was starting to getting rolling with the DJ Dr. Jones:

Within 5 or 6 songs there were maybe 10-15 of the original 50, and by song 11 or 12 the place was all but empty save the band and a few hardcore “fans.”  I’m not sugar-coating this, we were bad. We failed hard. Even a layup interlude like Tim Owens and I doing “Hell is for Children” Karaoke with a 90s LA Gangster rap bed (created by the great Mark Snyder) flopped. It was ugly.

That said, Daniel Lynds classed the joint up a bit, and I caught that on video!

Also, to be clear, I loved the whole thing. As noted, I never did play in a band before, and while we were excruciating, I wanna do it again very soon. Also, I do understand this was very indulgent. But with a month before the conference date and less than 40 people registered, I figured the whole conference was going to be a bust and figured we might as well go all out in the fun/indulgence department. As it turns out the conference was anything but a bust with over 80 folks showing up contributing to an overall amazing vibe—turns out Domains17 was a blast. That said, it was far from perfect (and Lauren did highlight some elements in her critique), but her organization for this conference was amazing and if Reclaim is part of running a second one—it will be in large part thanks to her brilliant work. That said, I think many folks think band was one of the elements on the cutting board, but let me say it here in public:over my dead body, punks!  I like that it was a colossal failure: alienating the audience, being unable to hold a tune, and inspiring folks with disdain for one’s solopsism hardly seem reason enough to do something as rash as cut the live band  🙂 And next time we’ll make sure the band practices, we promise.

In fact, there is even a new band we may be able to coax to come out for a second conference (if there is one).  With the recent release of their charting single “Tilde Space,” I think the Wrecklames would make an awesome headliner!

In a time of austerity, a little indulgenceto imbue some sense of culture in higher ed’s edtech scene seems important, wouldn’t you agree? I want more of this, not less.