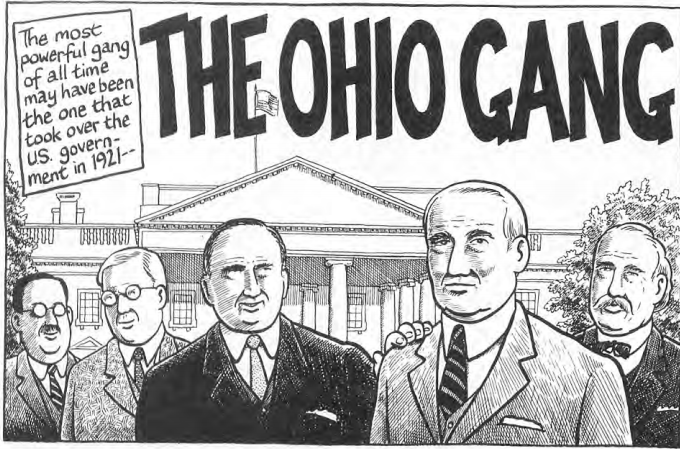 After the laughing attack that started tonight’s True Crime class, we actually got to some book learning. Tonight’s readings focused on political crime. In particular, we looked at muckraker Lincoln Steffens’s “Shame of the Cities” as well as Paul Rose’s vision of the Ohio Gang from his graphic novel The Big Book of Thugs. The Ohio Gang was a group of politicians and businessmen from Ohio that came to Washington D.C. with president-elect Warren Harding and proceeded to architect a wholesale rape of the nation’s coffers.

The HBO series Boardwalk Empire explores the legendary corruption duirng the days of “normalcy” by integrating some of the exploits of the Ohio Gang into seasons one and two. In particular, it follows the narrative of how Harry Dougherty brought Harding to national prominence and power. After Harding’s election Dougherty becomes Attorney General, soon after it shifts to his distrust of assistant Attorney General Jesse Smith who seems to be cracking under the pressure of guilt. Turns out the “supposed” suicide of Smith is believed by many to have been an attempted murder by Gaston Means. I love that Empire embeds a vision that dramatizes this history somewhat faithfully. What’s more, the show makes a point of demonstrating what an idiot Harding was with his “bloviating,”, not to mention the fact he fathered a bastard child with a teenage mistress. Here’s the clip that frames exactly that from season 1: